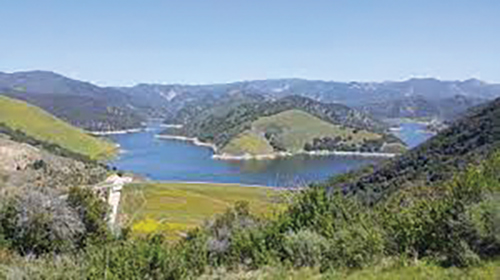 San Luis Obispo County is trying something new this year, and for three subsequent years, to try and maximize rainfall and hopefully help fill up one of the county’s main water reservoirs.

In October, County Supervisors approved awarding of a 3-year, $342,000 per year contract to North American Weather Consultants, Inc., (NAWC), a cloud seeding company and consultant for all things weather related based in Sandy, Utah. NAWC does weather work across the Western U.S.

The cloud seeding program will concentrate efforts in the watershed that drains into Lopez Lake, which provides drinking water for the cities in South County.

The County’s Supervising Water System Engineer, David Spiegel, said the contract will take effect Dec. 1 and they have a window for cloud seeding through the end of March, with an option to carry on into April, if we get April showers.

But the contract came too late to boost rainfall from the big storm that blew through last week.

‘We did not seed this storm event,” Spiegel told Estero Bay News. He added that the County had to consider the best time to cloud seed with “what we can afford,” in negotiating the contract.

He said last week’s soaking had some significant rainfall but nowhere near enough to make a dent in the shortage in the lake.

“We’re not likely to see any appreciable bump in the reservoir,” he explained. That’s because the hills surrounding Lopez Lake are bone dry from several years of below average rains, and any rain that fell soaked into the ground instead of running off into the reservoir. “The ground is so dry,” Spiegel said.

He said it takes 9-10 inches of rain over 2-3 months to start seeing the lake level climb.

He said the Lopez Lake area, which is south east of Arroyo Grande, suffers from a bad location. “A lot of the storms we get don’t sit on that watershed,” he said, and most either pass north of or south of Lopez Lake.

This new contract is a first for SLO County, he said. In the past they’ve done seeding from the ground but this new effort will give them an opportunity to seed the storm clouds from the air.

According to the Desert Research Institute, a leader in environmental research, “Clouds are made up of tiny water droplets or ice crystals that form when water vapor in the atmosphere cools and condenses around a tiny particle of dust or salt floating in the atmosphere. Without these particles, known as condensation or ice nuclei, raindrops or snowflakes cannot form and precipitation will not occur.

“Cloud seeding is a weather modification technique that improves a cloud’s ability to produce rain or snow by introducing tiny ice nuclei into certain types of subfreezing clouds. These nuclei provide a base for snowflakes to form. After cloud seeding takes place, the newly formed snowflakes quickly grow and fall from the clouds back to the surface of the Earth, increasing snowpack and stream flow.”

Having a significant rain in early November is out of character for the Central Coast, which normally starts getting rain in December or later. The Central Coast normally gets its heaviest rainfall in February and March, sometimes lasting into April and even May on occasion.

NAWC  has been doing seeding for the County for several years and this new contract will include aerial seeding.

“An aerial-based program,” Spiegel said, “will complement the existing ground-based program and increase the number of storms than can be directly seeded which will increase precipitation on the watershed.”

The ground-seeding program didn’t do much for Lopez Lake. “The ground-based seeding sites are all located to the south of the watershed,” Spiegel’s report said, “only allowing seeding of storms that are moving south to north. Aerial-based operations will allow storms traveling in all directions to be seeded.