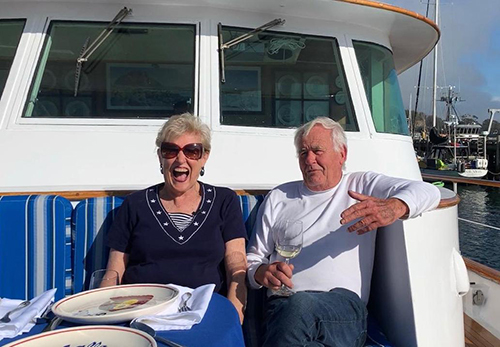 Since he was 10-years-old Leonard Gentieu has daydreamed about owning a yacht. “It took me until my mid-fifties,” he laughed. “I realized I needed to figure out how I might afford one.”

After a lifelong career as a professional chef and owner of restaurants, the perfect business plan emerged. He could cook and wife Midge could help him run the business. Bay cruises especially offering fine dining were popular among tourists and locals, especially for special occasions. Gentieu knew he could create memorable special occasions.

He researched where they wanted to live, found and purchased the Papagallo II and sailed from San Francisco Bay to Morro Bay during Harbor Festival, 2005.

“As we docked I was welcomed by one of the locals with ‘Good luck trying to make it here.’ We didn’t let that stop us,” smiled Gentieu.

And for the last fifteen years, four or fives times a week, Gentieu has prepared and served gourmet appetizers and five-course dinners for up to 62 guests during 3-hour cruises on Morro Bay. Midge handles all the bookings at www.onboardnauticalevents.com.

“COVID came out of the blue,” said Gentieu. “In March we had $12,000 in deposits that we suddenly had to return. Our business is down 89%. Now with social distancing and all the precautions we need to take to make our folks comfortable, we only allow 36-maximum on board, usually less.”

After four more cancellations in early August the question is how could they survive 2020? Gentieu’s answer, “The same way we’ve gotten through so far! We are debt free! We’ve had it better than most.”

Gentieu and the Papagallo II have rich lifetime stories. In the eighth grade he was the only male to join Chef’s Club. Classmates called him a sissy, but he loved cooking. During high school, he started working in restaurants washing dishes. Once his father gave him permission to follow his dream as a career cook, Gentieu discovered he was good at it. He graduated with honors from the Culinary Institute of America, Hyde Park, New York, and has enjoyed cooking for two three-star generals, owned and operated five restaurants and served as executive chef or in management positions for country clubs and resorts.

He then converted his dream of yacht ownership into a thriving retirement business utilizing his vast career training in worldwide cuisine preparation and his innate talent for creating memorable experiences onboard the Papagallo II.

Gentieu’s yacht had several names while serving numerous owners. She was built in 1964 by the Burger Boat Company for the president of Admiral Shipping Lines. Her first cruise was on Lake Michigan, but then she spent time in Florida before heading west in 1974.

Gentieu prominently displays her “guest flags” through the Panama Canal, Guatemala, El Salvador, and Mexico. Finally, her current namesake, Ercole “Hercules” Gabiati purchased her after he successfully built his business, Gallo Salami Inc., in San Francisco. He renamed her after his nickname Pappa Gallo. Gentieu decided to let her keep her name. It’s a great legacy story, after all, they both launched careers in the food industry.

When Governor Newsom opened California for business again, they were cautious. “July 4th we purposefully kept it at 22,” Gentieu said. “Those onboard were so joyful to be out on the water. They’d been cooped up so long, and the bay offered fresh air and wind in your hair. We booked some parties since the demand was there. We still have insurance and dock fees that come due every month.”

Gentieu called in his marketing consultant, Jeanette Trompeter to put plans in motion. “We’re ready to launch a new concept for smaller parties – six, eight, ten or twelve guests for a 5-course gourmet dinner,” he said. “People say they want to feel like they are on vacation.”

Trompeter, a retired KSBY-TV anchor who started consulting through Ruby Shoes Wine Club and Excursions, said, “It’s been an interesting time. When COVID hit I lost two of my largest clients, but I’m finding there’s a niche helping businesses see that there are still opportunities. I think Len and Midge are going to be busy with this new model. Smaller parties are more work to ensure safety, but I think people are willing to pay a little more to have more private experiences and excursions.”

And if sheltering at home and reading an entertaining autobiography that includes many of Gentieu’s recipes why not pick up a copy of his book “Chasing the Heat: 50 Years and a Million Meals.” Better yet put on your mask, go down to the dock between GAFCO and Harbor Hut and, if the galley door is open, Gentieu is in his “man cave,” the Papagallo II. He’ll even autograph his book and probably tell you a great story about a life lived extremely well.