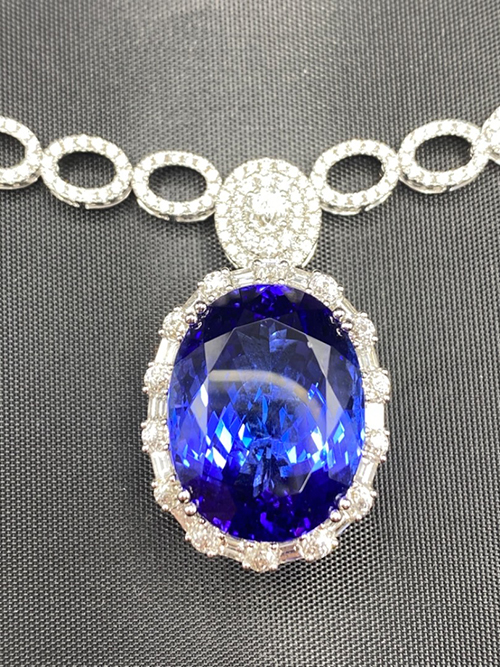 This 18K white gold, with 2.37-carats of diamonds and 48-carat ‘Tanzanite Crown of Light’ necklace cost $85,000 when purchased with embezzled money.

An Atascadero woman’s spoils in a major embezzlement case are being sold through a Morro Bay online auction house, in a first for the local District Attorney’s Office.

The auction goes until 7 p.m. June 9, when the bidding will start to shutdown. The auction closes completely at 8:15 p.m. on June 9.

And it’s a doozy of an auction too, with some impressive and expensive, jewelry, watches, sports and rock ‘n’ roll memorabilia, and shoes, lots of fancy shoes. Joy Wilde, 44 of Atascadero apparently laundered her stolen cash buying expensive baubles.

“The theft scheme involved Ms. Wilde passing 64 fraudulent checks and attempting to pass three others,” a D.A.’s news release from the time said. She pled “No Contest” on all 18 counts she faced and received a 10-year prison sentence.

Speaking to what is considered a long prison sentence for what is essentially a theft case, Judge Jesse Marino commented on the “outrageously large amount of money” taken by Ms. Wilde, according to the news release, and concluded that the decade-long prison sentence was warranted, “due to its sheer volume.”

Deputy D.A. Eric Dobroth said they seized the items that ended up in the auction, and whatever amount they sell for, will be given to the victim and credited against Wilde’s considerable restitution order. The victim was allowed to go through the items and keep anything he wanted.

Potential bidders can even see how much she paid for some of the more expensive items, as Wilde actually kept sales receipts. Those coupled with the new appraisals should give bidders a good sense of what an item is worth. Among the items that are for sale are:

• A custom designed and ordered platinum bracelet with 11.5 carats of cushion cut and emerald diamonds, with an original purchase price of $104,000; and,

Among the sports memorabilia are mini footballs and helmets signed by Dallas Cowboys great, and future Hall of Famer, tight end Jason Whitten; and by 49ers wide receiver, Jerry Rice, already a Hall of Famer.

There are also some extravagant custom shoes — high top sneakers covered in gold leaf, Christian Louboutin snakeskin stiletto heels, and several pairs of knee-high Louboutin sneakers, among others. There are also several high-price purses and clutches.

Dobroth said such auctions are rare but “one way to liquidate ill-gotten gains and to get the victim some money back.” Police have long been able to seize items proven to be purchased with dirty money — usually in drug dealing cases — that can include expensive cars.

Indeed, the County Sheriff’s Dodge Viper DARE car was seized in such a case.

Dobroth is hopeful the auction brings amounts near the true value of the items, to get as much as possible back to the victims. He noted that embezzlement cases — of which there have been several throughout the county in recent years — are especially tough on victims, who feel a sense of betrayal.

“For the most part,” he said, “a bookkeeper is like part of the family for these small companies. One of the toughest parts is the betrayal that they feel.”

See: slocalestateauctions.com for more information, to set up an account and bid on items, or just to settle your curiosity.

If the D.A’s auction of Wilde’s stolen treasures proves successful, it could lead to the sale locally of more ill gotten gains.