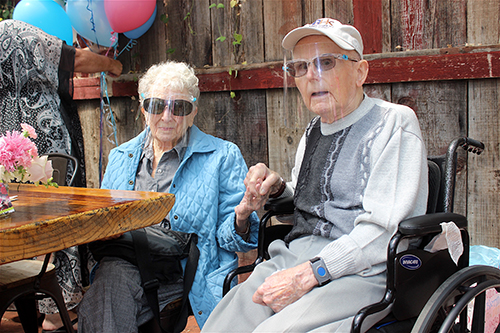 Friends and neighbors of Lee and Allyn Arnold of Cayucos gathered last week in the garden at Lunada Garden Bistro to celebrate the 100th birthday of one of Cayucos’ treasured citizens .

And while it was Lee’s birthday, it’s tough to separate the two when talking about their many contributions to Cayucos’ arts and educational endeavors.

Born in 1920 in Pueblo. Colo., Lee (nee Concettina) said Pueblo was a little town where her parents owned a restaurant.

The family made its way to Los Angeles, where Lee went to storied Lincoln High School, where her principal was Dr. Ethel Percy Andrus, who became the first woman principal of a major urban California high school in 1917 and served for 28 years.

“She became quite famous,” Lee said of Dr. Andrus, who was founder of the National Retired Teachers Association (NRTA) and the American Association of Retired Persons (AARP).

Over her working life, Lee was a teacher, principal and director of instruction in the Los Angeles Unified School District, and she was given the 1958 National Science Secondary Teachers Association Award.

Allyn, 94, who was also an educator, said he was in the Navy for a long time and he’d asked her to marry him several times, but she said “No.” Eventually he came up with a diamond ring and the two got married in 1978. It was his first and her second marriage.

They retired to Cayucos, where Lee said they’d had a second home while they were in Los Angeles. They wasted little time becoming involved in the community.

They co-founded Cayucos Beautiful, and Lee led the effort to use County funds to build the Cayucos Pier restrooms and resurface the pier entrance.

Lee led the Pier Plaza Committee’s fundraising for the plaza remodeling that features a sculpture donated by artist Dale Evers in 1994, and designed by Cayucos artist, Al Musso.

Allyn was a founder of the Cayucos Land Conservancy and they’ve been generous supporters of that group’s efforts at establishing a greenbelt around the town, including conservation of the Estero Bluffs (now a state park). He also served on the Cayucos Citizens Advisory Council for many years.

They’ve been major supporters of the Cayucos Friends of the Library, supporting libraries countywide, and helped found the Cayucos Educational Foundation, the fund-raising arm of the Cayucos Elementary School.

Allyn has been active with the Lion’s Club and was named Lion of the Year in 1992-93 and both are past Grand Marshals of the Lion’s Club’s Independence Day Parade.

They are also founding members of the Cayucos Historical Society. Both have been big supporters of education and the arts across SLO County and have also supported the Homeless Shelter Program and Food Bank Coalition.

And it was this wealth of history and public service that has endeared Lee and Allyn to their many friends and neighbors in Cayucos who look out for the two and pitch in to see that they are taken care of and loved during this pandemic that has everyone fearfully keeping their distance from each other.

Last week’s birthday party that included Bakersfield resident, Dick Noel, who came out to play accordion and entertain at the party, saw people put aside their fears of the virus to celebrate two special people and valued citizens of Cayucos.