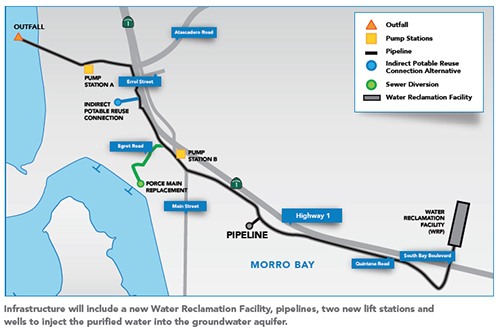 Morro Bay’s Water Reclamation Facility project took another over-budget leap with the awarding of a contract for the conveyance system, with the lowest bid some $7 million over the engineer’s estimate.

Anvil Builders, Inc., based in San Francisco, was awarded a $31.49 million contract to build the conveyance system, which entails running a number of pipes over 3 miles from Atascadero Road through town to the WRF plant, located above the terminus of South Bay Boulevard.

The Council also approved a $530,000 contract with GSI Water Solutions, Inc., for additional studies of the Morro Creek underground water aquifer and initiate the City’s plan to inject treated wastewater into the ground to supplement the water supply, so-called “Indirect Potable Reuse” (IPR).

Unlike the WRF treatment plant that had only two bidders, Anvil was the lowest of five bidders. The others were: OHL USA, Inc., at $39.67 million; Nicholas Construction at $42.66M; W.A. Rasic Const., $38.42M; and John Madonna Const., at $33.08M. The City’s engineer’s estimate on the job was $24.2M, according to a staff report from the Council’s Nov. 11 meeting.
Not all were happy with the bidding, as Rasic filed a protest that the project team recommended be rejected by the Council. According to the report, the team decided all the bids were “both responsible and responsive.”

Why Were Bids High?

Why were the bids so high? Blame it too on the pandemic.
While the City will work with the contractor following the award to understand the reason for the higher than anticipated bids and ways to reduce costs, some of the reasons for the higher costs could be:
• Uncertainty caused by the COVID-19 Pandemic;
• A challenging construction schedule; and
• Strict construction constraints aimed at minimizing the impacts to the City’s businesses that are significantly reducing the potential daily production rates.”
One of the big issues with the conveyance system has been the extended time that Quintana Road would be under construction, limiting access to one of the City’s four main commercial districts and one of the busiest roadways in town.

These latest contracts add to a project that is already well over the costs that residents were sold on.
According to the report, “This represents an increase of $8,021,000 [or 6.1 percent] compared to the current fiscal year budget of $130,661,000 presented to the City Council at the beginning of Fiscal Year (FY) 2020/2021.”
But, “That projected budget increase will not require any increase in customer water and sewer rates. The current water and sewer rates have sufficient elasticity to cover the project cost increase, in large part due to the City securing a very low-interest ‘Water Infrastructure Finance and Innovation Act’ (WIFIA) loan of nearly $62 million.”

The new overall cost has now reached $138.68 million. The original cost estimate used for a Proposition 218 vote in July 2018 was $126 million.
That’s the amount used to set a surcharge for the project’s debt service at $41 a month.
But even though the project costs are now $12 million over that initial estimate, the City said current rates can still cover it.
“The current water and sewer rates [including the $41 per month WRF surcharge approved through the 2018 Proposition 218 process],” the report said, “are sufficient to support a $138.7 million project budget even without receipt of a Clean Water State Revolving Fund [SRF] construction loan and grant from the State Water Resources Control Board.”

The State water board earlier this year approved the City for up to $100 million in loans and also awarded a $5 million grant for the project. But the amount the City will ultimately borrow from the State has not yet been determined.
City Manager Scott Collins told Estero Bay News, “The City’s funding application/materials for the SRF is under legal review segment of the process, meaning we are getting an important step closer to completing the deal.

“We expect this process to conclude by Spring 2021, and I think the interest rate is around 1.5%.”
The City has already accepted a separate, $10 million SRF loan, and according to Collins, they’ve spent all of that money.
“The City could receive up to $105M in SRF funding according to the Board that approved the SRF budget,” he said. “But with securing the WIFIA loan, we would expect a figure substantially less than that amount. The planning loan [$10M] will be consolidated into this new SRF loan, and yes we have submitted reimbursements for the full $10M at this point.”

The staff report said the City expects to borrow up to $59M, which could be good news for ratepayers.
“If the City secures the SRF loan and grant,” the report said, “the City may be able to collect less than the authorized amount for water and sewer rates, in essence, extending a discount to all rate payers in Morro Bay.”
Naturally there’s a catch. “However, a rate analysis will need to be performed at that time to determine if a collection reduction is feasible, and that analysis will be conducted and shared with the Citizen Finance Advisory Committee [CFAC] and City Council once more financial information is available on the SRF loan and grant [likely in Spring 2021].”
If rates need to be raised again, then another Prop. 218 vote could be required.

The consultant working on the design of the conveyance system, Water Works Engineers (WWE), finished its design work last May.
It includes a new pipeline from Lift Station No. 2 (under the Front Street parking lot) through the power plant to another new pipeline that will run from Atascadero Road, parallel to Hwy 1 past Lila Keiser Park to Main and then out Quintana Road to South Bay Boulevard.

The conveyance system consists of two raw sewage lines, a water line and two return lines — one that will bring treated effluent back to Atascadero Road for disposal in the ocean, and a second that will branch off, again into the power plant property, to hook up to a planned injection well field at the northeast corner of the plant property.
It also includes two, new lift stations — one at the Atascadero Road plant and another on Main Street next door to Lemos Ranch Pet Supply store.

An existing lift station near South Bay and Quintana will push the sewage up to the treatment plant.
The contract may have been awarded, but the City doesn’t yet have needed easements from the power plant owner, Vistra Energy and is in the midst of an eminent domain lawsuit to force the company to grant the easements. The City’s assessment of the values amounts to $200,000, which the City will pay Vistra, if it prevails in court. A judge could order more for the easements.

The City Council rejected a protest of the bids by W.A. Rasic that claimed the bids by Anvil and Madonna were “neither responsible nor responsive,” the report said. “The letter alleges the City must reject the two lowest bidders as being nonresponsive due to the two lowest bidders’ failure to provide resumes for key personnel and non-responsible due to lack of qualifications.”
So the City asked for the missing documentation from the two companies. “The City asked the two lowest bidders to provide the resumes required by the bid documents following the bid opening. Allowing late submission of this information does not provide these bidders any advantage over the other bidders.”

GSI’s $530,000 award continues the company’s hydrogeological work on the project’s IPR system.
Previously, GSI narrowed the injection well site to an east and a west location in regards to Hwy 1. The east site was near Miner’s Hardware by Morro Creek, and the west site, which the Council chose, is on the power plant property.
The conclusions so far are that the west site could accept 800-825 acre feet a year; the existing Morro Creek wells can extract 1,200 AFY (391 million gallons) without seawater intrusion; and it is possible to have the water in the ground for a minimum of 2 months

before being extracted, the standards under State Law.
Under the third phase of the hydro study, GSI proposed to design, permit and install the first injection well; prepare monitoring reports on the status of the groundwater basin; evaluate water quality; help prepare a Title 22 Engineering Report along with the project manager; and coordinate with the State Department of Drinking Water (DDW) on further modeling of the basin, for another $530,000.