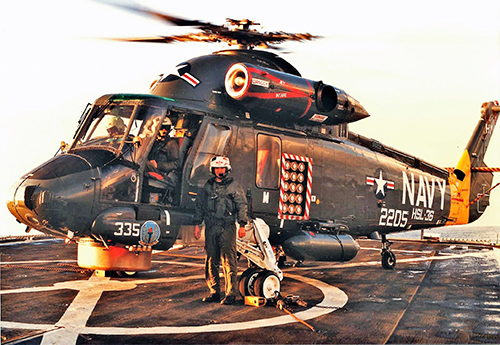 After three decades of delivering weather forecasts to our homes via daily emails along with print and radio reports from the offices of the largest utility in the state, John Lindsey has retired. June 30 was his last day as the marine meteorologist for Pacific Gas and Electric Company at Diablo Canyon Power Plant.

Like so many good things in life, John’s career began when unplanned experiences combined. After high school he joined the United States Navy and during Accession training, or A School, he was drawn to oceanography.

“I just completely fell in love with it,” he said. “It just clicked with me.”

It was financial circumstances that led John to his first paid weather related gig.

“I ran out of money,” he said. “I was going to Cal Poly, and I needed additional financial resources. I went to the career center, and there was an ad on the bulletin board for somebody who could forecast waves, and I had done that before in the Navy. I applied, and I got the job.”

He was in the Navy for 24 years, four years active and 20 in the reserves. In 1991, he started his Diablo Canyon Power Plant career with Tenera Environmental Services, where he calibrated seawater temperature recorders from numerous monitoring stations along the Pecho Coast and maintained the Diablo Canyon Waverider Buoy among other facets of his job. He was later hired as an environmental specialist at the power plant.

He went on to provided tours of Diablo to more than 25,000 people throughout the United States and the world and was a sought after speaker at service clubs, schools, non-profits and military events.

Additionally, for the past 14 years, Lindsey wrote a column for the Tribune and broadcasted his forecasts on KVEC morning news radio.

“Weather has such a great impact on all of us, maybe that’s the thing that attracted me. It impacts everybody to one degree or another. I just found that really interesting, because in one way or another we’re all connected.”

Folks looking to stay connected to John can still do so with his weekly print forecasts in the Tribune and Santa Maria Times as well as a monthly print column. He will also be a regular on The Dave Congalton Show on KVEC.

After 30 years in the business of weather, John said estimates and assumptions are, in part, somewhat like predicting the future, but it is more than that.

“I’m fortunate, I’ve been forecasting since 1991 in one area,” he said. “Over a timespan, you start getting the feel for the local weather pattern. That’s a real advantage. That’s helped out a lot, and I still have access to all the models. To be honest with you, the models are getting better and better and better each year. I’m really astonished by how good they have become.”

Applying all of that knowledge to a utilities company has more of an impact than whether to take an umbrella to work or not. John’s job included forecasting to determine how much energy would be required to keep homes warm or cool depending on the season. Storms and winds also have a huge impact on utilities as do wildfires that are progressively getting worse throughout the state and other areas of the country.

“The 1300 weather stations that we have installed throughout our service territory is remarkable,” John said of PG&E. “In San Luis Obispo County alone there’s hundreds of weather stations now that are available to the public that measures temperature, humidity and winds. Those stations are being inputted into models to make the models even more accurate.”

“I still think that you need a human being there to verify that the models are correct,” he said. “Being able to communicate is vital, especially conditions that could be hazardous for people. You never know, it might have prevented an injury or saved a life.”

Over the years, most of us on the Central Coast have grown used to the sunshine, coastal fog and the worrisome drought, but in on May 5, 1998, John had the opportunity to cover a tornado in San Luis Obispo with winds up to 86 mph.

“The National Weather Service came out, and they verified that it was a tornado,” John said recalling that the rain and the wind picked up at about 6 a.m. and the windows in his home on the corner of Kentucky and Fredericks streets were rattling.

The tornado knocked out power to several hundred homes and damaged four, including one struck by a fallen cypress tree.

Although that was the “weirdest” incident he covered, it is was not the only one that stands out in John’s mind.

“I think the March 1995 storms were just remarkable. We had an atmospheric river. We had a cold front that stalled over the area and that’s when Santa Rosa Creek flooded in the middle of Cambria, and people were going up and down Main Street on surfboards and in kayaks and canoes.”

He says he looks forward to increasing community involvement during his retirement. With more time on his hands, John also plans to utilize the 700 plus columns he has written to pen a weather related book while dedicating more time to Rotary and non-profits.

Perhaps most importantly, he will spend more time with Trish, his wife of 25 years with whom he has two children Chloe and Sean.

“Trish is a pretty remarkable woman, to say the least,” John said. “She amazes me every day. I couldn’t imagine life without her. I am fortunate because I’m nine years older than she is, so I’m planning to leave this earth before she does. I would never want it any other way.”

It has been a good 30 years for John, his friends and followers.

“The support that I’ve received from the community has been overwhelming. I’m so grateful that I’ve been able to provide the service to our community and to all the all the people who read and listen, I am this profoundly happy that they found a good use for this stuff.”

Estero Bay News wishes John the best years to come and thanks him for his years of a Central Coast connection to the world of weather.