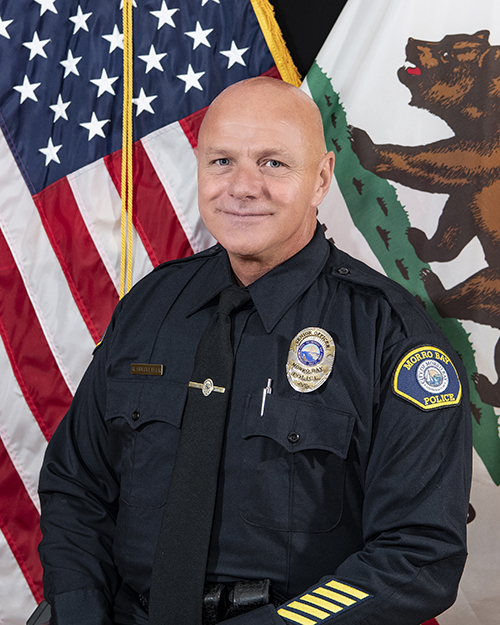 Morro Bay Police Department has promoted it longest tenured officer, Robert Hufstetler, to fill a vacant sergeant’s position. Hufstetler has been with MBPD since 1998. Submitted photo

The Morro Bay Police Department filled a vacant sergeant position, hired one new officer and still has one spot open, for which they are now seeking to fill and get back to full strength.

Senior Ofc. Robert Hufstetler was promoted to Sgt. Hufstetler in a badge-pinning ceremony in early January, filling a vacant position that opened up when former MBPD Sgt. Jerrod Place left for a job with the San Luis Obispo County Sheriff’s Department. Place was promoted to sergeant in March 2020.

Hired by retired Chief Joe Loven, Sgt. Hufstetler came to Morro Bay in 1998 from Moreno Valley, where he’d started in law enforcement in 1994.

In Moreno Valley, he worked with that department’s Gang Unit and Graffiti Patrol teams, according to MBPD Cmdr. Amy Watkins.
Hufstetler is now the longest-tenured officer at MBPD, after Sgt. Rick Catlett retired in March 2020.

“Rob was an original member of the P.D.’s Motor Unit when it started back in 2001,” Cmdr. Watkins said, “until it was defunded in 2005; and was instrumental in helping me revive our Motors Program back in 2016.”
Sgt. Hufstetler is still a motorcycle cop, though these days they glide along on electric motorcycles. He is also a trainer and the traffic division supervisor.

Sgt. Hufstetler has worn many hats in the small department. Cmdr. Watkins said he’s been the department’s Range Master, a Senior Officer, Field Training Officer and has served as a Watch Commander and Acting Sergeant throughout his career.
“There is no doubt that he is well qualified and capable of handling the role as a patrol sergeant,” she said.
Place had replaced Sgt. Catlett, which left an officer position open. They’d recruited for that job and were ready to fill it in April 2020, but then the pandemic hit.

The City’s budget belt tightened considerably with the coronavirus pandemic response and the Governor’s stay-at-home orders, and subsequent business closures that took a white shark-sized bite out of the City’s tax revenues.
Leaving that position open was one of numerous cost cutting measures the City took, including some 70 layoffs (mostly in the recreation department), elimination of the Tourism Department, and significant pay cuts taken by remaining City employees — supervisors, department heads and administration.

But after the mid-year budget review in December, the City felt confident enough in an economic recovery that the Council allowed the job to be filled.

“We swore in one new officer,” Cmdr. Watkins said, “Luis Martinez from Lompoc, which was on hold since April. The position was frozen for budgetary reasons from COVID. We were able to finally fill that position and then had a sergeant leave and go to another agency in November.”

So the department continues to have one empty officer position‚ now stemming from Sgt. Hufstetler’s promotion, and Cmdr. Watkins said they are recruiting now to try to fill that job.

As for why a police sergeant would leave MBPD for a deputy Sheriff’s job, Cmdr. Watkins said it’s the pay difference. “A Sheriff’s deputy makes enough for a sergeant to leave our position. Sad, we work hard to get them and they leave because of money.”
It’s a familiar refrain, and not the first time MBPD has lost an officer to the Sheriff’s Department. It’s happened about six or seven times over the past 20 years or so, including the loss of a second in command and even a police chief when former Chief Tim Olivas left to become Sheriff Ian Parkinson’s Undersheriff. Olivas is now retired.

← Previous: Moving Forward in 2021: Tim Cowen, Morro Bay Entrepreneur to Lead Chamber Board Thank You From the Osprey →