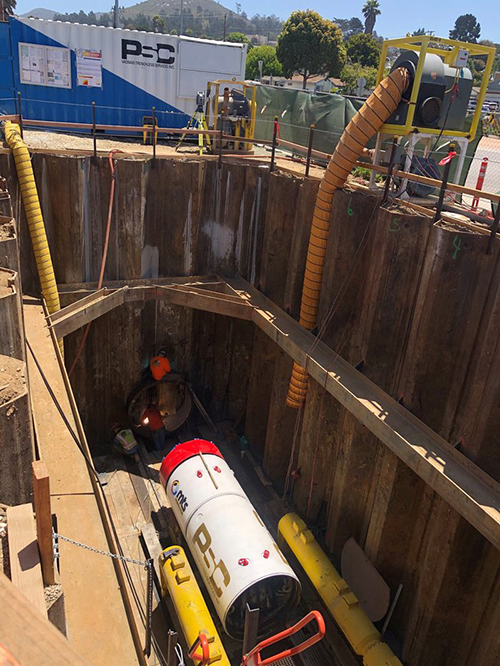 Part of the massive City of Morro Bay Water Reclamation Facility project included tunneling under the roundabout on Main.

More changes to the contracts are in the pipeline for companies building the City of Morro Bay’s Water Reclamation Facility project, adding over half a million dollars to the pipeline portion of the project.

At its Jan. 19 meeting, the Public Works Advisory Board was presented with new amendments to the contracts for the conveyance system of the City’s biggest project ever, now about $175 million.

In a staff report, City engineers presented Amendment No. 3 to the contract with Water Works Engineers, LLC for additional engineering design services on new piping routing and lift stations needed for the conveyance system.

The new pipes would move raw sewage from the old plant site on Atascadero Road to the new treatment plant off the end of South Bay Boulevard and bring treated effluent back for disposal or injection.

The project calls for building two new lift stations — Pump Stations A and B officially — on Atascadero Road and Main Street respectively.

The added services are in part needed to come into compliance with new California Air Resources Board requirements for emergency back-up generator emissions permits, according to the report.

Other new duties include:

• Provide support by reviewing and responding to micro-tunnel contractor delay claims (this is for the work tunneling under the roundabout).

• Oversee and facilitate electrical and instrumentation acceptance inspection and testing.

The new CARB regulations stem from a change to CARB’s “Best Available Control Technology” standards, according to the report. The changes came after the City designed, bid and started construction. Essentially, they need to put emission control devices on the emergency generators’ exhaust systems.

As for the roundabout tunneling project, which was going smoothly until the sub-contractor, Vadnais Trenchless, hit a snag last September and the massive tunneling machine bogged down.

Vadnais investigated the problem, fixed a few teeth on their digging head and then pushed the 5-foot diameter casing through with no more issues. But the tunneling job was shut down for about 2 months. No explanation has been given for what bound up the drill.

While that part of the project was completed months ago, the bills are still coming due. Water Works, which designed and plotted the route for the conveyance system portion of the WRF, “supported construction manager in review of delay claims made by Contractor related to alleged change in geotechnical conditions and obstruction in the path of the micro-tunnel machine,” reads the City report. “Services included virtual meetings, engineering analysis, field visits, and response to contractor correspondence. Activities for this task are complete; however, associated costs are for compensation for out-of-scope services provided by WWE to support the program management team.”

Additional duties include re-routing the pipes through the power plant bike path’s 70-foot easement, and over the bridge at Morro Creek; analyzing a change demanded by the Regional Water Quality Control Board to combine the outfall from the City’s desal plant into the ocean outfall system for treated wastewater; and to re-designing some electrical panels, among others.

Currently, the desal plant discharges brackish (salty) water into the outfall canal at the base of Morro Rock, which has completely silted in since the power plant ceased using it in 2014.

The contractors on the pipeline, Anvil Builders, Inc.’s part of the changes, would add some $587,000 and bring the company’s contract up to over $32.75M. The original conveyance system bid was for $31M.

Anvil’s breakdown for the new charges includes: $43,000 for delays and disruptions caused by SoCal Gas; $111,000 for delays due to the tunneling job’s difficulties; $301,000 to buy the CARB required equipment; and $84,000 for boring through debris obstructions on the bike path, among others.

According to the report, “The project’s joint trench, containing multiple pipelines, parallels an existing 16-inch diameter SoCal Gas high pressure gas main for nearly the entire alignment along Quintana Road. SoCal Gas requires a representative to be on site during all digging activities, as well as other work activities occurring within 10 feet of the high pressure gas main (i.e. that could potentially damage or otherwise impact the main). There have been several occurrences where the SoCal Gas representative did not show up for scheduled assignments, which prevented Anvil from performing contract work and/or progressing the joint trench.”

So while SoCal Gas fiddled, Anvil’s workers were left idle, according to the report. It lists six specific days when the crews had to wait around for gas company reps, wasting from 2 hours to 4 hours on each day.

They also discovered a water line where it wasn’t supposed to be. “As part of the site preparation and demolition work at Pump Station A [on Atascadero Road],” reads the report, “an unknown 6-inch waterline was discovered and needed to be relocated to construct the pump station. The extra work included potholing and locating the unknown utility, trenching and installation of new by-pass piping, pressure testing and disinfection of the relocated waterline, backfill and other site work.”

The underground debris was discovered by a new subcontractor — Pacific Boring — while tunneling under Willow Camp Creek, which crosses the bike path and enters the power plant property. It happened on Nov. 11 while jacking through a 5-foot diameter casing to carry the conveyance system’s four pipes. It was quite a discovery.

“Anvil and Pacific Boring,” reads the report, “were immediately instructed to suspend the jack & bore mechanical operation and hand excavate to investigate and confirm the size and extent of the concrete obstruction. For the following 6 consecutive days (including Saturday 11/13/21 and Sunday 11/14/21), Anvil and Pacific Boring worked 8 to 10-hour shifts to hand excavate and jack hammer out the concrete obstruction, while simultaneously advancing the casing pipe about 20 feet using the hydraulic jacking equipment.”

They cleared the obstruction on Nov. 18, and finished the job that same day, according to the report. So what was it?

“The obstruction appears to be an old Caltrans culvert structure from the original CA Route 1 highway,” the report said. “Also note the jack & bore work through jurisdictional wetlands needed to proceed without delay, working through the weekend, in order to meet a California Department of Fish and Wildlife mandate for the tunnel to be completed by 11/19/21.”

These changes, like all the others that have come before, don’t yet mean the City’s budget is busted, as they will be handled through the project’s contingency monies. But there is little wiggle room left.

“As a result of these two amendments,” the report said, “the remaining [conveyance] project contingency is $17,028. As a result, these amendments will not result in an increase to the WRF project budget or the rates paid by the City’s water or wastewater customers.”

While the pipeline contingency funds might be all but used up, the City set rates back in 2018 using a project budget that included some $23 million in cash, raised through water and sewer rates.

With its two loans from the State and Federal Governments sporting incredibly low interest rates, that cash will be raised through the rates but not necessarily needed, unless future changes bust the project budget further.