While residents work on staying healthy during the Coronavirus Pandemic, the shutdown of the economy has thrown many into unchartered financial waters, and left the City of Morro Bay gearing up for what could turn into significant shortfalls in two of its three biggest sources of tax revenues.

City Finance Director, Jennifer Callaway, said the City is studying now what the impacts of shutting down much of the local economy will be to the City’s finances. “Your inquiry is very timely as we are in the midst of running multiple budget scenarios for the remainder of this year, next year and potentially beyond that,” she said in response to questions posed by Estero Bay News, “as we just don’t know how long it will take to recover, economically, from all of this.

“We are preparing,” she continued, “for the worse but hoping for the best as this pandemic has certainly stalled our local economy and that is very concerning for our entire community, residents, business owners and of course as a City, as our primary revenue sources are generated from Sales Tax, Transient Occupancy Tax and Property Tax.”

One could expect property tax revenues to stay pretty steady, as annual increases come more from homes that are bought and sold and reassessed for tax purposes, as opposed to new construction.

It’s those other two, main tax sources that fluctuate based on the health of tourism in town and the overall State and National economies.

TOT is a 10-percent tax added to the cost of a room night at motels, B&Bs, RV parks and vacation rentals. This money is remitted to the City within 30 days of being collected. So TOT collected in one month is due to be paid by the end of the next month, or late fees and penalties could be tacked on.

But the City council at an April Fool’s Day special meeting, unanimously voted to delay until Aug. 31 collection of the TOT from February and March if a business owner needed the money to stay afloat. The City picked Aug. 31 because that is the end of the fiscal year for accounting purposes.

No late fees and penalties would be charged so long as what’s owed is paid by Aug. 31.

The businesses would still be required to pay the extra fees for two tourism promotions assessments, 3% for the Morro Bay TBID and 1% for the County Tourism Marketing District.

“Currently,” Callaway said, “we are very much focused on the Sales Tax and TOT components, recognizing that at a minimum March and April results will be much lower than anticipated and revenues generated during those months will be significantly impacted.

“Of no surprise, and as you stated, we fully expect both sales tax and TOT to come in under budget for Fiscal Year 2019/20 and are revising our budget estimates for FY 2020/21 as well.”

She added that City Hall was doing its own internal calculations on the hit the City will take and have also asked for revised estimates (on sales taxes) from their consultant, HDL.

“Once we receive HDL’s revised estimates,” she said, “we will be comparing our internal calculations to HDL’s, then finalizing our projections, both for this year and the upcoming fiscal year.”

Putting a price tag on what the City stands to lose while the economy is mostly shut down wasn’t something Callaway felt comfortable doing right now, but she said they plan to bring their analysis to the City Council in late April or early May.

The new draft budget is usually released in May and voted on by the Council in June. Fortunately, or perhaps unfortunately, the 2008 economic crash gives some idea of what to expect.

“I can tell you that we are reviewing historical revenue data back through the 2008 recession period to help guide our modeling,” Callaway said, “as that is most likely the most relevant data we have to understand how our local economy is impacted by economic setbacks and recessions.”
The City does have a plan, however. “On a positive note,” she said, “the City has a ‘Short-Term Financial Emergency Plan’ that was adopted by the City Council in 2018.” (See: morrobayca.gov/DocumentCenter/View/13006/Reso-97-18-Short-term-fiscal-emergency-plan.)
City Manager Scott Collins invoked that plan using a “natural disaster” finding, after declaring a local emergency in early March that put the City in line for Federal and State disaster relief monies.
Callaway added, “We financially responded very quickly and implemented several mitigation measures that are outlined in the plan, including a chill on all hiring [departments can not fill vacant positions without approval of the City Manager]; a chill on all travel out of the area [again, without preapproval of the CM]; reprioritize capital projects, meaning that we are proceeding with capital projects that are funded with restricted funds, for example the security improvements approved by the City Council during the mid-year discussion in February, as those costs, including staff time, are funded through impact fees rather than the general fund.”
The closures also haven’t shutdown the City’s biggest project ever, the $126 million “Wastewater Reclamation Facility” or WRF. Work on the new treatment plant was recently begun. Other projects and needs could be held up.

“We are also currently assessing operational costs and what can be deferred,” Callaway said.

As a sample of what could be expected in terms of lost tax revenues, according to the Tourism Business Improvement District’s most recent reports, the total receipts for motels in January 2020 topped $1.323 million, compared to $1.29M in January 2019, so revenues were up slightly before the pandemic hit. TOT for January from motels topped $123,000.

Numbers past January were not available but looking at last year’s figures shows what’s potentially at stake.

That left a balance of $1.164M to make budget, a figure that will be impacted because of the business closures.

April usually marks the start of the busy season, with schools both locally and in the Central Valley letting out for Spring Breaks and visitors starting to show up for the spring weather. It’s also when the City’s big events happen. But not this year.

The Annual Citywide Yard Sale Weekend, put on by the City Tourism Bureau, was set for April 4-5 but has been postponed until the last weekend in May.

The Annual Kite Festival, usually held the last weekend of April, was canceled and the Cruisin’ Morro Bay Car Show, slated for the first weekend in May, has also now been canceled by the organizers. Even high school graduation is in jeopardy.

Of note, City Manager Scott Collins said that he and the City department heads “have voluntarily opted to take salary reductions of up to 8% starting immediately. The Mayor and City Council have unanimously elected to forgo their Council stipends effectively immediate. On an annual basis we estimate this will reduce City costs by upwards of $90,000.”

The CV-19 closures are sure to be troubling times for all, but the City is trying hard to stay on top of things, as it has a healthy general fund reserve but one that was already being tapped to cover a structural deficit, a situation the City had projected couldn’t last even before this emergency.

City offices are closed to the public and many employees are working from home or working strictly through telephone and email.

“Addressing the impacts of this pandemic is truly going to be a multi-faceted approach,” Callaway said. “The City does have emergency reserves set aside and these are the exact circumstances under which use of reserves would be warranted, and precisely why it is important to have reserves.”

But reserves, like savings accounts, don’t last forever. “I say that cautiously though, as noted, we don’t know how long this will last and how long it will take for the economy to rebound, so we need to conservatively use reserves at this time to ensure there will be funds available to augment future years if needed, or to address the inevitable increases we will likely see from CalPERS, given their $64 billion losses with the market crash,” Callaway said.

Though uncertainty often breeds fear, Callaway said the City is hopeful. “While overall this sounds dismal, I realize it, I wholeheartedly believe that Morro Bay is resilient, creative and rock solid,” she said. “We are stronger working together, the community, businesses and City team, and we will all need to come together to help solve the challenges that lay ahead.”

Readers can keep up with all the City’s CV-19 decisions and announcements online at: www.morrobayca.gov/covid19.

← Previous: Virus War Brings Changes to Morro Bay From the Inside → 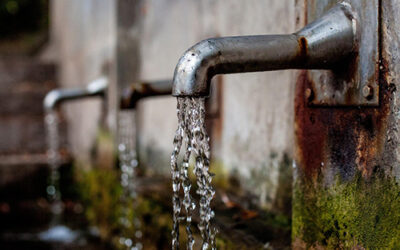 Water rates could increase in Los Osos.  Water rates for much of Los Osos could be going higher and if people want to... 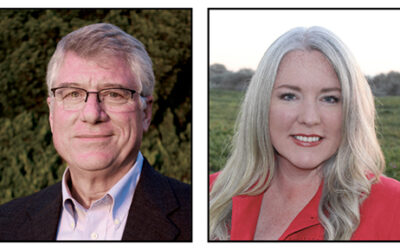 James Costanzo and Jen Ford In the June 7 Primary Election, Morro Bay voters will pick someone to serve out the... 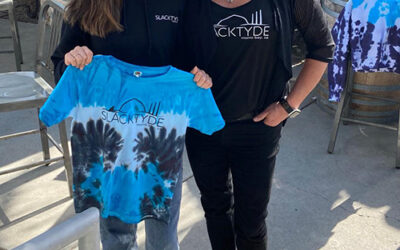 Dylan and Stephanie Bueno show off one of their shirts at Morro Bay’s Foghorn where brother Blake works. Photo by Judy...