Morro Bay Lions Give Thanks with a Car Giveaway 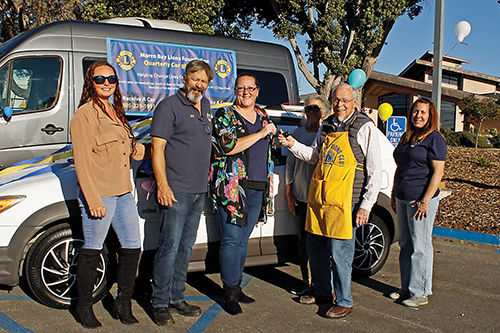 Ray Mc Kelvey of the MB Lions hands the keys to the car to Kelley Welch as part of their Car Giveaway Program. Photo by Ruth Ann Angus

It’s darn hard to get around on the Central Coast if you don’t have a car. Bill Todd, of Todd’s Garage in Morro Bay, decided to do something about that and enlisted the help of the Morro Bay Lions Club. It was his idea to obtain older model cars in fairly good condition and fix them up and give them away to individuals who are struggling with transportation and finding it difficult to earn a living.

Transportation is often the stumbling block for a person crawling their way out of homelessness. Without it, they have difficulty getting employment even if the job is located not far from a bus line. If they cannot get to their job on time, every day they run the risk of losing that job. Employers may be understanding, but they also need their workers to be on the job. Bus transportation can be dicey here.

That’s what Kelley Welch ran into when she recently landed a great job as a preschool teacher at Grandmother’s House in San Luis Obispo. Welch, who is technically homeless but fortunate to be staying temporarily at a friend’s home, hoped the job would help her be able to get her own place to live.

Welch was raised here in Los Osos from the time she was six years old. She attended Sunnyside Grammar School, Los Osos Middle School, and after some home schooling entered Cuesta College early. Taking courses in education she received her diploma qualifying her to teach preschool.

“I knew this was the career for me,” she said, “I love working with kids.”

She obtained employment at a local preschool and was still living with her mother at the time. Then misfortune struck. In 2013 Welch’s mother’s trust fund went bankrupt, and they were eventually evicted from their rental home. Now homeless, she was offered a job as a nanny for a family relocating to Arizona. Her mother did not want to move out of state and ended up at the shelter in San Luis Obispo for nine months, eventually being placed by CAPSLO in a small apartment at Judson Terrace.

“This was a tremendous shock for me,” Welch said, “I now had no living relative.”

After six years in Arizona, Welch wanted to return to the Central Coast. By this time, she had changed jobs and was working at a preschool in Phoenix. Then 2020 and the pandemic hit.

She moved, stayed with a friend and got work in elder care at a local nursing home as no preschools were open during the pandemic. When COVID restrictions eased she was offered the job with the preschool. Then the car a friend loaned her broke down and was not fixable.

Welch thought she could get around easily by bus but found out quickly that this was not the case. Trying to coordinate travel with two separate bus companies during a driver shortage, Welch often found herself unable to reach her job.

“Once I went to the bus stop and waited a long time. When the bus didn’t show up, I noticed a little paper sign on the pole there, it said this was no longer a bus stop.”

That’s when she heard about the Moro Bay Lions Club Car Giveaway Program, and she signed an application. “Without this car from the Lions,” she said, “it’s likely I would lose my job. And I love this job!”

Welch plans to volunteer with the Lions to help pay it forward for someone else and is saving up to rent her own place.