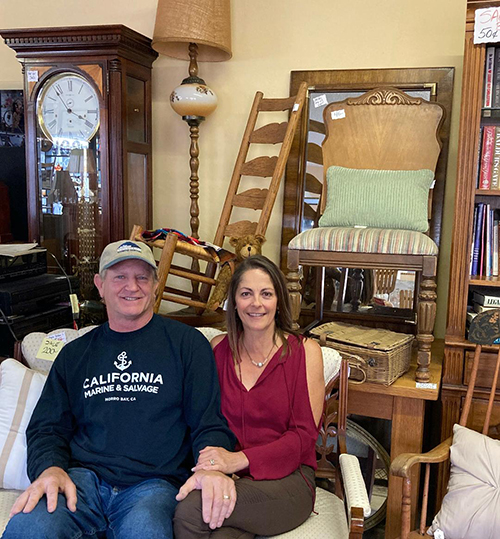 It has been more than fifteen years that I have had the honor to write for Morro Bay and other SLO newspapers. Most of my interviews have been with small business owners trying to compete with Internet interlopers or Big Box giants. My belif has always been shoppers will support locals when they know, like and trust the business owner. Let me introduce Jim and Leslie (Rugerbregt) Sanders and their three affiliated Morro Bay businesses
– The Good Flea, California Marine & Salvage and Goddess Goods.

Wowzer! Everyone loves a tender romance! Jim and Leslie are newlyweds, but their friendship started years ago when their four kids attended Del Mar Elementary School.

“I was president of PTA and so impressed with Leslie as she chaired our art fund raiser,” Jim said.
Their kids remained friends through high school while their parents focused on their businesses. Then Jim stopped by The Good Flea one day. Leslie found the nerve to be bold and say she was single. Respect instantly became love-in-bloom. Their first date was dinner and ballroom dancing at the Madonna Inn.

“I proposed two years ago on Winter Solstice while on a walk to Morro Rock,” Jim said. “The sun was setting as the moon was rising.” Leslie added, “The Chumash were drumming.”

Jim said he fumbled in his pocket for the ring while she was distracted. They married Summer Solstice 2018.
“We have been working in the store ever since,” Leslie said.

Jim has been coming back from carbon dioxide poisoning resulting from a home-safety incident. It forced him to stop diving, which is the core service of his business. He admitted he’s taking it day-by-day before he can fully get back to diving. Leslie doesn’t mind at all.
“We both love a good treasure hunt – he finds treasures by sea and my business finds them on land. For now, every day at work is fun,” she said, “Whether picking up a heavy load from customers or helping people in the shop, we do it together.”

The Good Flea is celebrating its 10th Anniversary. Leslie has heard a lot of stories as she’s helped people downsize. Her business goal became a quest to find new homes for her customer’s treasures and castaways.
“I never expected a thrift store would introduce me to so many friends and let me help my community,” she said. “We have customers come back on their vacation each year to say ‘hello.’ Others drop by to look around just to enjoy the memories. I thought I would be selling just stuff, but people have memories and attachments to their belongings.”

Leslie was working retail-management on the waterfront when she saw an advertisement for a 25-year old business with a corner storefront right off Hwy 1. She wrote friends and family for loans to help her buy it. One friend’s mother was a commercial real estate broker and schooled her on “due diligence” before she made the offer. She was able to negotiate a price she could afford. She changed the name to The Good Flea to avoid any past liabilities, and then her friends Don McLean, Bonnie Johnson and Tammy Haas helped her clean it out before opening.

“At first I was overwhelmed with what to take in or buy,” she said. “I received good advice from other thrift owners, especially ‘You make your money when you buy it.’ But I also learned I love to help people and it hurts me when customers say they took their things to the landfill.”
Over the years Leslie has had several fond memories of her own. “A girl cried when she saw her mom’s basket. She had missed the estate sale. I had to give it to her.”

Another young man struggled with siblings thinking they were getting rid of their parent’s estate too fast. “I saw him focus on a painting. I had to give it to him.”
Leslie has learned there is a timeline in the grief process. She had to learn to be respectful of people’s attachments. “Recently I had to call my sister in to listen to one lady’s stories about each item as she was downsizing, so I could finish the job she hired me to do.”
The most unusual estate sale acquisition was the remains and letters to an owner’s dog. And then there was the ghost story inside The Good Flea…
Jim has just as many rescue stories from California Marine & Salvage. “I love to help the traveler fix the vibration they’ve heard before they travel on and get in trouble at sea.”

Leslie says he can find anything in the bay – wedding rings, keys, phones. “Some things just want to be found,” Jim said. “A guy lost his phone in Avila in the mud near all the seals, that made me nervous. I finally said to myself ‘I just want to stick my hand in the mud and come up with the phone.’ I did. There was a phone, but not his phone. I went back another time and pulled out the guy’s phone.”
Another time a lady was positive her purse was all white. “When I brought up a multi-colored purse, she said it was the right one. It was all white inside when she opened it.”

Jim and Leslie were entertaining visiting friends when a couple came up, frantic, they had lost their keys that had dropped through a hole in the T-Pier. “I got a flashlight and dove and found them. Our friends were amazed.”

Another time a man lost a ring from his deceased wife. Jim found it in an oyster shell. “The man decided his wife had led me to the shell. She loved oysters, he said. He kept the shell, too.”
The entire family is in a good place right now. Leslie’s son, Jett, just started the University of Oregon. Her daughter, Holland, is in the National Guard at Camp Roberts.

Jim has two daughters, Melissa and Martina. During 2020 one of Leslie’s friends owned Goddess Goods on the Embarcadero. When they discovered it was for sale, they decided to help Jim’s daughter purchase it. It specializes in vegan/gluten-free offerings.”
“Melissa has always wanted to be in the nutrition business,” Jim said. “Since it was take-out only for months, she had the time to develop her menu plan and learn to run the business.”

Leslie concluded, “There isn’t anything better than having your kids all grow up finding their way as you hoped they would.”