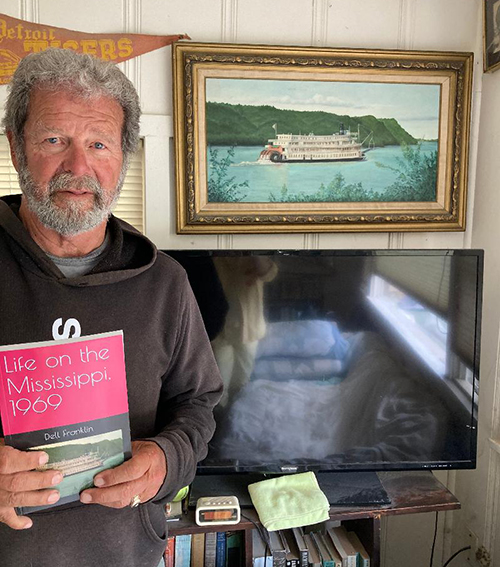 Dell Franklin wrote the book “Life on the Mississippi, 1969,” and his mother did the cover art.

This columnist has post-COVID wanderlust! So, while researching river cruising, I discovered a local author, Dell Franklin, had written “Life on the Mississippi, 1969.” The dry-docked Delta Queen is America’s last authentic paddle-wheel steamboat and in 1969 Franklin spent a year crewing as its storekeeper. The recent Army Veteran first had to prove his worth. In doing so he lived the first of many stories he would write about while living the life of an American writer. He profiles characters he meets along his way. And like himself, they are complicated, living the life dealt them the best way they know how. Franklin celebrates their dignity and purposeful lives. My hope is more readers will discover Dell Franklin. Coalesce Book Store and Volumes of Pleasure Book Shoppe carry his book. His other essays and series are at www.dellfranklin.com.

Central Coast readers probably best know Franklin for publishing The Rogue Voice. He and Stacey Warde wrote for New Times before the death of their friend and publisher Steve Moss in 2005. They decided to team up and produce a monthly literary tabloid.

“Those were the best three years of my life,” said Franklin. “Stacey and I did all the jobs from selling ads, writing the articles and putting the paper together. I’m not a salesman, but we had 50 ads. Not everyone liked what we had to say. Some even trashed the issues as soon as we put them in the racks. I made a rack-sign saying “Thou Shalt Not Kill’ with a picture of a Bible.” Franklin has never shied away from controversy. Warde now publishes while Franklin contributes.

Like his career, his writing life has been prolific— rich with adventures only he can translate to prose. At seventy-plus, he has ten manuscripts waiting for the self-acclaimed “best writer you’ve never heard of” to be discovered and published.

Dell grew up in Compton, CA. “A good place to grow up. Good hard working folks,” he said from his balcony overlooking what he calls “the shabbiest house in Cayucos.” He was able to purchase it seventeen years ago with “a little inheritance.” He found his paradise with a forever view of the Pacific Ocean. He walks daily to the Cayucos Pier with Wilbur, his rescue dog everyone knows and greets.

His dad was Murray Franklin, a pro baseball player. “At 9-years-old, Dad starting taking me inside the locker room. Old school ballplayers cut me no slack.” He was groomed by the best of them. “I had a powerful relationship with my dad. Adversarial, but we were close. Baseball took over my life. I got offers to play pro ball but I couldn’t get along with the coaches. Didn’t have the discipline.

“In school I was told, ‘You have a voice, you can write.’ I knew I wanted to write. So at 19, I threw it (baseball) all away and went into the Army. I thought I was a failure. It took years to overcome.”

Today Franklin believes his best writing is in “A Ballplayer’s Son, A Memoir,” chapters of which can be read on his website. “I know baseball,” he said.
His grandfather and mother raised him since his dad traveled. “My mother inspired me. She was a nurse — should have been a doctor. She was artististic and literate beyond her education.” While he was writing “Life on the Mississippi, 1969,” she said she wanted to do something for him. “I asked her to paint the Delta Queen for the cover of the book.”

In 1969 Franklin hitchhiked across America ending up in New Orleans. Broke after partying his last dollar away with some Vietnam veteran survivors, he was told the Delta Queen was hiring. He talked his way onto the crew convincing the captain he had the skills to run their store. He and Chef Henry Joyner, Sr. bonded instantly.

He had learned stocking inventory at his dad’s store. When his dad couldn’t play ball anymore he opened a wholesale/retail shoe repair shop. “I liked stocking,” he said having learned the skill in his dad’s store. “When I work I work hard — give it all I have.”
It would become the experience that would make him realize he had stories to tell starting with the respect he had for Chef Joyner and the men on the Delta Queen. “I knew it was a good story,” he said. “Chef Joyner made me feel alive and respected. I made Chef’s life easier.

Jerome Davis was his roommate and was guarded at first. The waiters, like Davis, were from the Pullman Train era and were elegant men. “He instinctively knew I was a ballplayer. He was 50. I was 25. He eventually mentored me.”

With the rest of the crew it took weeks of working alone and then a brawl to earn their respect and acceptance.
Writers are typically not great at promoting their own work. Franklin is no exception. His friend, John Willingham, became his angel. “He loved the book and literally took it from me, transcribed it and got it published. It would never have happened without him.”

After his year cruising on the Delta Queen, Franklin had found his life’s passion. He hitched back to the West Coast and took any job that would earn him enough money and time to write. He ran his dad’s shoe repair shop in Los Angeles and bartended in Manhattan Beach. He knew he was partying too much and visits to the Central Coast had introduced him to a slower lifestyle. He decided to make a change when he found the right house, one he could afford.

Only hours away, he’s stayed close to his sister Susie (Herron) and her two boys Mark and Adam. “She got me my first cell phone a few weeks ago when I went to emergency for high blood pressure. She made me promise to take it everywhere I go.”

For years the people of the Central Coast have been Franklin’s muse. He’s met some interesting characters in Morro Bay bartending at Happy Jacks and Circle Inn before it was renamed Legends. Driving a cab in SLO was an even richer research assignment. But even Franklin can be surprised by the humans he has met on his life’s journey. Check out his series The Cabbie’s Life, in particular “Hanging Out with the Dogman,” at www.dellfranklin.com. Wilbur really like this one!