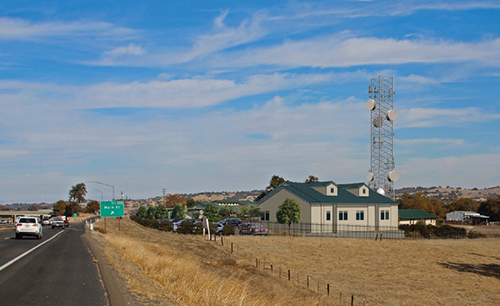 Above is a rendering of the County’s future ‘Co-Located Dispatch Center’ in Templeton. The County awarded a design-build contract and completion is expected in Fall-Winter 2024.

County Supervisors awarded a contract to build a new Emergency Dispatch Center that will handle police and fire calls for over half the county, and bring a somewhat unwelcomed facility to Downtown Templeton.

The contract includes $1.5 million contingency fund for a total potential contract amount of $24.9 million and an overall construction budget of $25.25 million.

Steve Neer, the County’s project manager, told Estero Bay News that the new dispatch center will be built on a site adjacent to the County Sheriff’s North Coast Substation, just off Main Street and adjacent to Hwy 101, just before the Main Street exit.

The site is generally called the North County Regional Center, he said. The Templeton site is a change from the original site that was being discussed for a new dispatch center, which had been slated for County owned property on Kansas Avenue.

Neer said the Supervisors decided, “a long time ago to move it to a better suited site.” He said they ran into several problems when they started taking a closer look at the Kansas Avenue location, including concerns about blight from the scenic Hwy 1 and poor soils.

“The soil there is an alluvial soil and not suitable for public facilities,” he said. The soil type meant that they would have to cart off all the soil from the foundation and truck in better-suited soils, a cost that would have made the facility astronomically higher.

But doesn’t the County have several facilities there, namely the Juvenile Services Center, Honor Farm, animal shelter, the County Office of Emergency Services (OES), and the Men’s and Women’s Jails?

“The Sheriff’s Office,” he said, “ran into major issues” with the foundation work on the Women’s Jail, because of the poor soils. And the new dispatch center would have eaten into a County maintenance yard, and as well as a safe parking lot for the homeless that was established right next door.”

The Kansas site also would have meant removing an OES Media Center that was set up to be a media hub during natural disasters.

There were also issues with communications from the Kansas site and a technical working group of OES, County IT, Sheriff’s and Cal Fire analyzed the two sites and chose the North County location as better suited for the dispatch center.

They’ve been working on this project since 2012 with the aim of bringing the Sheriff’s and Cal Fire Dispatching under one roof. Currently, the Sheriff’s law enforcement dispatch center is in the OES Building on Kansas Avenue and fire radio center is at the Cal Fire/County Fire headquarters on Hwy 1 in SLO.

The Sheriff’s Department dispatches its own calls from unincorporated towns, as well as Morro Bay and Arroyo Grande police radio traffic.

In 2016, the Supervisors approved using the “Design-Build” method of project delivery, meaning that the same company, Diani, will both design the facility and build it too. Such a method is supposed to cut down on issues that inevitably crop up over the long duration of these big projects, and to streamline the decision-making process.

With the contract award, Diani will start with its design work and Neer said they should be ready to break ground in Spring 2023, with a completion date sometime in late fall or early winter 2024.

The project is one of three big ticket jobs the County is planning to sell bonds to finance, the others are a new Probation Department Office on Johnson Avenue in SLO, and the rebuilding of the Cayucos Vet’s Hall. Neer said the Supervisors are expected to take up the bond sale issue sometime in November.

The bonds are expected to be repaid out of County General Funds, and not include a specific new tax, so it likely won’t have to be approved by voters.

But the construction contract and its contingency isn’t the whole costs, as there are also $5.67 million in building and site costs, and $6.02 million in “soft costs” — i.e. professional services, administration, permits/fees, testing/inspections and more project contingency, for a grand total project budget of $36.68 million.

The D-B contract is in two phases — design with a budget of $6.5 million and once the bond financing is in place, the construction phase.

The Templeton site wasn’t without its detractors, namely, the folks in Templeton.

Among the issues Templeton residents raised was concerns about a 160-foot tall radio antenna needed for the center’s radio traffic.

Neer told EBN that the tower will have assorted antennas and radio receivers and transmitters on it and be aligned with similar facilities on top of Tassajara Peak, on the Cuesta Ridge. That’s how they will be able to have communications with Arroyo Grande as well as the North Coast communities. Cal Fire dispatches Los Osos, Morro Bay and Cayucos fire department calls.

TAAG had a few other concerns: “TAAG has focused on the following primary environmental issues associated with this project’s development at its proposed Templeton 101 and North Main Street location.

•  Aesthetic impacts of the proposed 140 -160-foot Communication Tower at its proposed Templeton location;

• Exclusion of the County’s existing COC Kansas Avenue SLO operations site from consideration as the location of the new Co-Dispatch facility;

• Effects of the project’s traffic circulation regarding increase in daily vehicle trips (employee and emergency vehicle) that will impact the 101- North Main Street overpass interchange.”

TAAG also complained about some of the impacts the County identified in the project’s EIR, namely, the tower’s adverse visual effect on “existing scenic vistas in a wide area.”

They also argued that the tower’s height would dominate the area and give an “industrial-utilitarian appearance” and lights on the tower, which could be required by the Federal Aviation Administration would “interfere with nighttime views and enjoyment of the nighttime sky from the surrounding community.”

They also express concerns about storm drainage from the site, which is planning to build a catch basin to keep all runoff onsite, but TAAG worried could overflow the existing drainage to Toad Creek, which ultimately drains into the Salinas River.