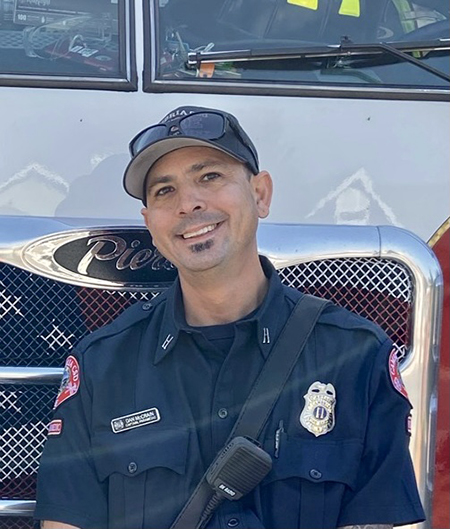 Morro Bay’s new fire chief comes to Rock City from Cambria, taking on a job that could soon become much broadened from the usual putting out fires and saving lives.

City Manager, Scott Collins, announced June 30 that he had appointed Daniel McCrain to be the City’s new fire chief. Collins said he selected McCrain from some 20 applicants and put a few first-choice picks through the normal set of reviews and interviews, “with community members, Morro Bay Fire Department staff, and local fire and police chiefs,” Collins said in a news release. He starts work in Morro Bay on July 31.

“I am excited to bring Daniel McCrain onboard at this key time in Morro Bay history,” said Collins. “The City is going through some big changes and the fire department will play a key role in seeing these challenges and opportunities through successfully. Therefore, we need a strong leader and manager to guide these important efforts by working closely with our talented fire department staff. Daniel is the right person for the job, and I look forward to him joining my executive team and leading the fire department.”

McCrain brings over 27 years experience in fire/paramedic and emergency management service, according to Collins. He was a captain with the Cambria Community Services District Fire Department, “where he oversees emergency response for his shift and the agency’s fire prevention, community education and commercial business inspection programs,” Collins said.

Before that, he was the operations director/paramedic for the Cambria Community Healthcare District, which provides ambulance service for Cambria, where he managed paramedic and EMT staff, training, and records.

McCrain has also served in several fire management roles for other agencies and taught paramedic and EMT courses at Cuesta College. Chief McCrain earned a bachelor’s degree in Emergency Management from Waldorf University, and an associate’s degree in Fire Technologies from Allan Hancock College.

McCrain said, “I am honored to be selected as the new fire chief for the City of Morro Bay. This is a great responsibility, and I am very humbled that the City has put their trust in me to guide the department into the future.

“The members of the Morro Bay Fire Department are an incredibly talented, and dedicated group of people that care for the community. I am so grateful for the love and support from my family, which has been instrumental in my growth and progression throughout my career. I thank the City for giving me the opportunity to work with this outstanding department.”

McCrain takes over for the retiring Chief Steve Knuckles who had been with MBFD since 1999, when he was hired away from Atascadero Fire as a captain. He became fire chief in 2013, replacing the retiring Mike Pond. McCrain will be the first fire chief who comes from outside the department, as the past several chiefs were promoted from within the department, drawing from the fire captains to fill the top spot.

McCrain will oversee a department of 13, full-time employees and several part-timers. He comes in with the department is looking pretty set for the time being, in so far as large equipment and proper crew quarters are concerned.

The MBFD has a relatively new firehouse built in 2012, a ladder truck, engines and paramedic squad that are all less than a decade old. And he comes at a time when the City has tax monies to fund the fire department, including Measure Q, a special sales tax that is reserved for the police, fire, streets and storm drain needs.

That Battery Energy Storage System or BESS project is being proposed by Vistra Energy, owners of the power plant property. Vistra’s BESS project is a 600-megawatt facility, that would be housed in three, 91,000 square foot, 40-foot tall buildings (some 273,000 s.f.), each housing 2,400 lithium-ion battery packs. It would be the largest BESS in the world.
It is being proposed for a 22-acre site on the power plant that used to have huge fuel tanks. The BESS is a $500 million to $600 million project and a huge concern with regards to potential fire.

Vistra said in a recent presentation to the City Council, that it’s fire suppression systems would be designed in consultation with the fire department.

Vistra hopes to have it ready to go online by 2024, when the first unit at the Diablo Canyon Power Plant is slated to shutdown permanently.
The City is planning to hold a ceremony welcoming the new fire chief at 10 a.m. Friday, June 30 at the Harbor Street firehouse, followed by a reception where the public will get a chance to meet the new fire chief.