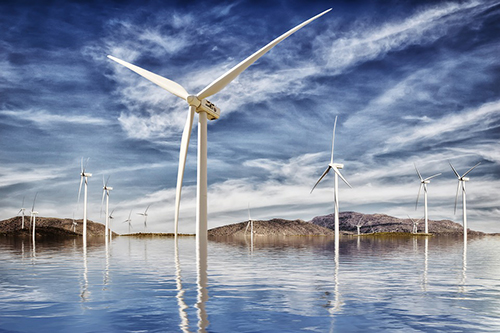 The federal agency that oversees the development of offshore wind energy has released an environmental report and is seeking public comments.

The Federal Bureau of Ocean Energy Management or BOEM is seeking comments on its Environmental Analysis (EA), done under the National Environmental Policy Act (NEPA), concerning the plans to install hundreds of floating wind turbines in a 396-square mile (240,898 acres) patch of ocean, providing some 3 gigawatts (GW) of energy.

BOEM is working towards an auction of leases for the so-called “Morro Bay Wind Energy Area,” sited 17-20 miles offshore from San Simeon. A similar lease sale held on the East Coast recently brought in over $1 billion.

This is all part of the Biden Administration’s pledge to tap offshore wind energy setting a goal of developing 30 GW of energy capacity by 2030.

“The WEA,” reads a news release from BOEM, “was designated after extensive collaboration with other Federal agencies and the State of California, as well as engagement with ocean users, Tribes, local communities and the public. Designation of the Morro Bay WEA underscores BOEM’s commitment to an all-of-government approach to achieve the Administration’s ambitious offshore wind energy goals while conserving and restoring ocean and coastal habitats.”

The Draft EA looks at potential environmental impacts and socioeconomic effects from issuing the leases “and related site characterization and assessment activities within the Morro Bay WEA. Site characterization activities include geophysical, geotechnical, archaeological and biological surveys needed to develop specific project proposals on those potential leases,” BOEM said. “Site assessment activities could include installation and operation of meteorological buoys in the Morro Bay WEA.”

BOEM’s Pacific Office Regional Director, Doug Boren, said, “Public input on our environmental analysis and identified measures to avoid or reduce potential impacts from leasing activities is an important part of our process under the National Environmental Policy Act. BOEM will analyze and consider all comments before we finalize our analysis.”

The news release kicked off a 30-day window for public comments, which ends at 9 p.m. Friday, May 6. The draft EA, instructions on how to submit comments, and information on public meetings can be found online at: www.boem.gov/morro-bay.

But commenting on the EA is just another step in this now, 10-plus year bureaucratic hurdles race. “Before approving the construction of any offshore wind energy facility on a potential future lease in the Morro Bay WEA,” the agency said, “BOEM will develop an Environmental Impact Statement to analyze the specific environmental consequences of constructing and operating such a facility, in consultation with Tribes and appropriate federal, state and local agencies and with participation by ocean users, stakeholders and the public.”

BOEM is tentatively scheduling its lease auction for sometime this summer, after it has analyzed the EA comments, which will be incorporated into a Draft EIS. That document will then be circulated for a month for more comments.

Once that is finalized and the auction is held, buyers get their turn to put together a project and start studying environmental impacts in more focused detail.

The auction will come after BOEM publishes a “Proposed Sale Notice” in the Federal Register, which will trigger another round of public comments leading to a “Final Sale Notice” and then the actual auction.

And the review doesn’t end there. Indeed, it’s just getting started.

If BOEM holds a lease sale for some or all of the WEA, the EA said, “the issuance of a lease would grant the lessee the exclusive right to submit for BOEM’s review a plan proposing development of the leasehold. The lease itself does not authorize any activity within the lease area. Therefore, BOEM does not consider the issuance of a lease to constitute an irreversible and irretrievable commitment of agency resources toward the construction of a wind energy facility.”

Successful bidders must develop a Construction and Operations Plan or COP, detailing what it intends to build, and then analyze every possible impact from biological, geological, geotechnical, and archaeological surveys to site assessment activities including meteorological and oceanographic buoy deployment.

Through studies done already, BOEM has characterized the offshore winds here, annual wind speeds of 8-10 meters per second, which BOEM said is better than average winds in the North Sea.

They also eliminated one kind of mooring system due to the water depth, which at 1300 meters goes down over three-fourths of a mile (4,265 feet). “These water depths make pile-driven foundations (e.g., monopile or jacket) infeasible based on current technology,” BOEM said. That leaves giant concrete mooring blocks for holding the floating wind turbines on station, as the most likely mooring method.

Castle Wind signed a memorandum of understanding with the City of Morro Bay to support Castle’s efforts in exchange for monetary support by the company. Once the auctions are held, it’s anticipated the City will formalize an agreement with Castle Winds or whoever wins the leases, as the tentative plans now are to bring the power ashore to the Morro Bay Power Plant for connection to the power grid.

Indeed, it was the Navy’s use of the offshore areas for training flights out of Lemoore NAS that killed another potential site offshore from Diablo Canyon Power Plant.

BOEM acknowledges that fishing will be impacted. “Floating wind facilities are likely to be incompatible with certain gear and fishing methods that are used in the deeper waters offshore California [e.g., trawl, pot/trap, long line, nets], BOEM’s EA said.

They don’t feel sport fishers will be impacted because they rarely go in waters deeper that 200 meters, according to BOEM.

“Given the ubiquity of fishing activity along the Pacific Coast,” BOEM said, “no single exclusion area or mitigation approach would resolve all potential commercial fishing conflicts. Some areas important to one sector of the industry may not be important to others, and currently no available information indicates unique fishing grounds within the Call Area that are either marginal or notably valuable.”

BOEM continued, “The approximate water depth range within the Morro Bay Call Area is between 860 meters and 1300 meters. Given the offshore and deep locations of the Call Area, a simple depth analysis reveals that many commercial fisheries are not likely to experience notable preclusion from fishing grounds as a result of wind energy development in the area.”

The federal overseer of West Coast Commercial Fishing is concerned about the seafloor habitats in the call area, as some of it already falls under various protective programs.

“These designations indicate areas that contain ecologically important habitat and may benefit from protection from human activities, including offshore wind energy installations.”

Another area where the Call Area was expanded into, the so-called East Extension, is more conducive to commercial fishing, as the water is shallower.

“The PFMC notes that this area was historically important for trawl harvest of dover sole and sablefish and is currently an important area for fixed gear sablefish harvest. Currently there is no large-scale market for groundfish trawl vessels; however, historic production from trawl vessels should be considered as a placeholder for future fisheries impacts.”

The trawl fishery suffered a near death blow in the mid-2000s, when The Nature Conservancy bought trawl permits from local fishermen and nearly shut down the fishery, which drags large nets across the seafloor in deep water to catch sole and other groundfish species.

In response, a so-called “Catch Shares” or quota system was established so some trawl fishing could continue under strict guidelines. In its heyday, trawl fishing accounted for 75% of the local catch.

A study of these recommended sea-lanes will have to be done, too. U.S. Coast Guard (USCG) will be conducting a “Pacific Port Access Route Study,” [PACPARS] to evaluate whether the shipping lanes should be moved.

The PACPARS, BOEM said, “will help the USCG determine what impacts, if any, the siting of offshore wind facilities may have on existing maritime users and any potential impacts to vessel traffic and maritime navigation. BOEM has coordinated closely with the USCG throughout its planning and siting process and will continue this coordination to address potential maritime impacts from any future offshore wind development.”

With the Federal Government moving towards the sale of offshore wind leases off the Central Coast, the State of California has made a hefty commitment to help Humboldt Bay build a port facility for its offshore wind area.

The California Energy Commission recently announced a $10.5 million grant “for renovations at the Port of Humboldt Bay to support offshore wind activities in an area designated for development on the North Coast,” the CEC’s announcement said.

The intent is to build the “Humboldt Bay Offshore Wind Heavy Lift Marine Terminal,” the CEC said, which, “will be capable of handling large heavy cargo vessels, offshore wind floating platform development and integration and decommissioning, and other maritime activities.”

The terminal would service up to 1.6 gigawatts of wind power located in the so-called “Humboldt Call Area.”

CEC Commissioner Kourtney Vaccaro said, “I’m excited by the opportunity to partner with the Humboldt Bay Harbor, Recreation, and Conservation District in their pursuit of revitalizing their port to support the necessary infrastructure for deploying ocean based clean energy resources that will benefit Californians. Offshore wind is an important part of the state’s clean electricity future, providing critical supply at night to complement our abundant solar resources.”

Humboldt has great expectations from offshore wind. The CEC said the project would, “revitalize the waterfront industry in Humboldt County and provide living wage jobs to nearby communities. An economic assessment found that the terminal could generate as many as 830 local jobs and more than $130 million in industry output over a five-year period.”

The $10.5M is included in the 2021-22 State Budget and Gov. Gavin Newsom plans to more than double down with his next budget. That budget will propose $45 million “for additional investments to prepare waterfront facilities in California to support floating offshore wind energy development in federal waters off the California Coast.”

With just two call areas — Humboldt and Morro Bay — identified thus far by the Bureau of Ocean Energy Management (BOEM), at least some of that money should be expected to find its way to support the proposed 3GW wind farm being sited off San Simeon.

The CEC was tasked with studying offshore wind energy under Assembly Bill 525, which calls for development of a strategic plan.

“The legislation,” the CEC said, “requires the CEC to evaluate and quantify the maximum feasible capacity of offshore wind to achieve reliability, ratepayer, employment, and de-carbonization benefits and establish megawatt offshore wind planning goals for 2030 and 2045 by June 2022 and submit the strategic plan to the Legislature in June 2023.”

The State’s investment is focusing on the paperwork aspects; the CEC anticipates construction funds would come through Federal grants.

As part of the strategic plan, the CEC, in coordination with relevant state and local agencies, “is required to develop a plan to improve waterfront facilities that could support a range of floating offshore wind energy development activities, including construction and staging of foundations, manufacturing of components, final assembly, and long-term operations and maintenance facilities.”

The Humboldt Harbor District is all-in as well. “Humboldt Bay,” Harbor District Board President Greg Dale said, “has the optimal conditions to serve as the primary port for the offshore wind industry for the entire West Coast. We are fully dedicated to prepare our port for this remarkable opportunity and we are honored to be working with the California Energy Commission to launch California into the future of energy production.”