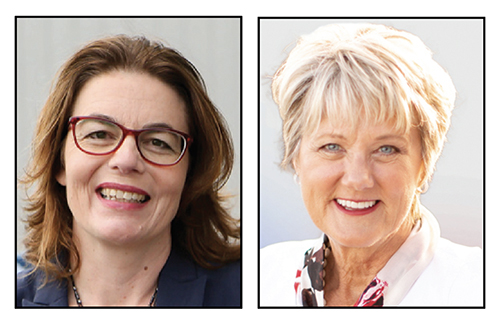 Dawn Addis and Vicki Nohrdren will face off for the State

Local election lineups are set now, as the home stretch begins to the Nov. 8 General Election, on a ballot with many uncontested races.

Most residents of the Estero Bay Area won’t be doing much local voting, after numerous special district, CSD and school board candidates went unopposed, their races decided in walkovers that won’t even appear on the ballots.

Here’s a rundown on who’s running against whom, and which candidates got a free pass.

Morro Bay will of course have contested races as two candidates faceoff for Mayor and five vie for two Council seats.

In the Council race, all five people who pulled nomination papers got them turned in on time and certified by the City Clerk to qualify for the ballot.

For at least the second time in Morro Bay history, there are no incumbents in the council race, after Councilman Jeff Heller decided not to seek re-election, and Councilwoman Dawn Addis finished at the top in the Primary for the new State Assembly seat — Dist. 30 — which is also wide open with no incumbent. If Addis wins, she’ll be the first Assembly member from Morro Bay in decades.

When was the other time that there were no incumbents? That would be 1964, when the City voted to incorporate and in the same election selected the first ever slate of council members.

Morro Bay Councilwoman Addis is running as a Democrat against Vicki Nohdren, a Republican from Carmel for the Dist. 30 Assembly seat. According to her website, Nohdren has been a realtor, and youth director at Presbyterian Church in Carmel. She has also volunteered with CASA advocating for children in the court system and later, a family liaison. (See: https://electvicki.com).

No matter who wins, it will mark the first time Morro Bay will be represented by a woman since Andrea Seastrand was elected in the early 1990s.

As of the 2020 Census, California State Assembly members represented an average of 494,227 residents, according to the political website, Ballotpedia.org. Assembly members earn $114,877 a year in salary and $211 per day in per diem (the Assembly session this year ran from Jan. 3 to Aug. 31)

The redrawn Dist. 30 spans from below and east of Santa Maria northwest through California Valley and north to include the North Coast Communities, SLO, Atascadero, Paso Robles and up the Hwy 101 corridor through Salinas Valley; as well as along the Coastline. The inland towns of Greenfield, Gonzales, and the Coastal Cities of Monterey, Carmel, Santa Cruz and up to near Morgan Hill in the South Bay Area are included in the new Dist. 30 territory.

In SLCUSD TA4, incumbent Mark Buchman is being challenged by parent/teacher Tony Evans.

In TA5, incumbent Ellen Sheffer was unopposed and won’t be on ballots.

County Supervisorial Dist. 2 was redrawn for this year’s elections to exclude Morro Bay, San Luis Obispo, and Los Osos. It stills covers Cayucos north to Cambria and San Simeon, plus inland to include San Miguel and Atascadero.

Four-term incumbent Bruce Gibson of Cayucos is being challenged by retired physician Bruce Jones of Atascadero.

Of note: Morro Bay and Los Osos were both drawn into different supervisor districts — Morro Bay into Dist. 3 and Los Osos into Dist. 5 — after redistricting following the 2020 Census, and neither will vote in any Supervisor races this time around.

And in case readers were wondering which Supervisor they should complain to or seek assistance from, Morro Bay is now represented by Dist. 3’s Dawn Ortiz-Legg, and Los Osos by Dist. 5’s Debbie Arnold.

Both will be up for re-election in the June 2024 Primary.

In Los Osos at the CSD, all three incumbents up for re-election were unopposed and therefore won’t appear on the ballot, in the first election held with voting districts in place.

Like untold numbers of other California small districts and cities, LOCSD conducted a study looking for pockets of so-called disadvantaged voters, and drew up maps for voting districts.

The action by the CSD board came under the “California Voting Rights Act of 2001” that sought to make sure certain minority populations weren’t having their vote diluted by “at-large” elections, wherein all candidates are selected by all the voters.

Switching to district elections was intended to head off any potential lawsuits from anyone who might sue under the Voting Rights Act and collect attorney fees, much in the way attorneys took advantage of the Americans with Disabilities Act rules and regulations to sue business owners and municipal governments and collect millions through out-of-court settlements.

The premise is that ethnic neighborhoods have more voting power and thus better representation when kept together, as opposed to the “at-large” system.

EBN asked LOCSD Director, Ron Munds if he thought the district system is why they got so little interest in the board election?

“I don’t think districting made a difference,” Munds said. “We didn’t have an election last time around either.”

The three incumbents who will get new 4-year terms in walkovers are: Charles Cesena in Division 1; Matthew Fourcroy in Div. 2; and Christine Womack in Div. 4.

For Womack, it’s the end of a long and winding road, as she was first appointed to a vacated seat, only to have an election snafu and ballot mistake by the former County Clerk invalidate her first election, which led to her running in a special election 2-years ago seemingly to sort out the mess, only to have to run again this year to set the LOCSD’s election cycle right. Womack was unopposed in the elections, but the election schedule should be back on track now.

In the Cambria Community Health Care District, three people were uncontested. Laurie Mileur of Div. 2 and John Melon of Div. 3 will get full terms, and Bruce Mumper will get a partial term.

The Morro Bay Chamber of Commerce is planning two council candidate events in the coming days and weeks.

And the second is a traditional candidates’ forum moderated by the League of Women Voters and broadcast live on cable and the Internet, set for 6-8 p.m. Wednesday, Oct. 5 at the Vet’s Hall, 209 Surf St. AGP Video will broadcast the event on Charter Cable Ch. 20 and online on SLO-span.org.

All candidates had been invited to each event by the Chamber but whether or not they confirmed attendance wasn’t known before EBN’s deadline.