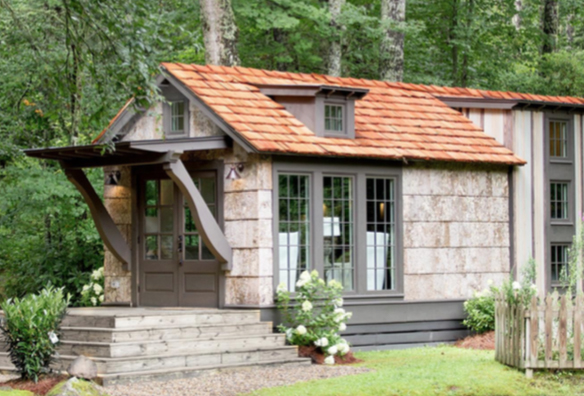 This ‘tiny home’ [500 square feet] built by Berkshire Hathaway is an example of one type of housing that could go in at Morro Elementary School. Photos courtesy SLCUSD

What to do with an old school? That’s the question the San Luis Coastal Unified School District is mulling over, as it looks to a potential future of tight budgets with the closing of Diablo Canyon Power Plant.

For the past few years, after Pacific Gas & Electric announced it would close Diablo Canyon when its final license ran out in 2025, the District has been preparing for a huge drop in its annual property tax revenues.

San Luis Coastal is a “basic aid” district, meaning it derives most of its revenues from local property taxes, Diablo Canyon being the largest single entity paying into the District.

The District put together a Blue Ribbon Committee to study the issue and the committee made its report to the District in 2017. Among the many recommendations to increase revenues, was to either maximize leasing potentials at the District’s three, closed elementary schools or sell them as surplus property.

The closed schools are Morro Elementary in Morro Bay, Sunnyside in Los Osos, and Old Pacheco School in SLO. Parts of Sunnyside have already been leased out to different entities, including Cal Fire, which has a training facility on campus, so it is already making some money for the District.

The District Trustees are now contemplating various scenarios for Morro Elementary with a neighborhood of manufactured homes providing affordable housing for District employees, being the one that’s risen to the top.

“Back in 2001,” Assistant Superintendent for Business Services Ryan Pinkerton told Estero Bay News, “there was a loss of unitary taxes [major drop in revenues] and it necessitated the closure of some sites [Morro Elementary, Sunnyside Elementary, Old Pacheco-campus by Cal Poly].

“With the loss of population and lack of growth on the coast, there was never a need to turn these sites back into schools. Nor do we see a need for them in the future.”

Time is wearing on the schools, which are among the oldest in the District. “These campuses are getting very old and in need of major modernization in the coming years,” Pinkerton added.

The growing maintenance issues will soon outstrip the revenues coming in. “We have done some work on asphalt and utilities,” he explained, “but the list of needs is long and growing. The cost of modernizing those campuses will cost millions more than we will make in leasing the property.”

Morro Elementary’s buildings are leased by some churches, and a charter school, which uses the newest of the buildings on campus.

The Diablo Canyon closure is the next big issue with regards to the District’s revenues.

“Diablo Canyon closure is causing our unitary tax to drop and we assembled the Blue Ribbon Committee to give us an outside look at our budget issues,” Pinkerton said. “One of their recommendations was to look at these surplus properties and see if we could turn them in to revenue generators. Selling a school site gives us one-time money that can only be used for facilities. It will not help our bottom line or create ongoing revenue.”

The District approached City planners about the school site. “We had an initial meeting with the City of Morro Bay staff to see what they would want to have on the property,” Pinkerton said. “Housing seemed like the biggest need, as they view that part of town as residential and near the water as more commercial growth.”

The high cost of housing in Morro Bay had another consequence, pushing local workers to find cheaper housing elsewhere, commute into town to work and then take their paychecks back home with them.

“They also discussed the fact that it was hard for business to flourish with people coming into the city to work, but then leaving and living elsewhere,” he said. “It is tough for those Downtown businesses to stay afloat.”

The City also said there was a need for warehouse space but housing was the top priority for the old school.

Meanwhile an activist group, “The Hourglass Project” (now called REACH) has been advocating for affordable workforce housing and the District contracted with them to analyze the school site’s possibilities.

“We had some discussion with them about our surplus properties,” Pinkerton said. “The Board of Education agreed to a contract with REACH and the Deloitte Group to give us a better understanding of the possible development scenarios for the site.”

The study looked at various types of housing — apartments, and modular homes — as possibilities, along with selling the property vs. leasing it out.

But selling, with its 1-time nature, and restrictions on use of the proceeds, wasn’t really an option.

“Based on the costs of development and the current economic situation we are in, housing and apartments didn’t fair well,” Pinkerton said.

Costs were high with the District actually building the housing, and if all the District had was lease payments, “the profit margin would be slim for the district.”

Though no decisions have been made, Pinkerton said the “modular home option offered a much cheaper opportunity that the District could work with a for-profit entity and potentially derive a larger ongoing revenue source.”

Essentially, the District would obtain permits and then build the infrastructure — putting in the utilities, roads, sidewalks, etc., and create the building pads — then tenants would buy a modular home and have it installed on a pad.

The analysis, entitled, “Development of the Village at Morro El,” (dated Sept. 10), said the purpose was “To build a manufactured home community that will provide the District with housing options intended for District employees and local community workforce… To develop a sustainable, mixed-income, and inter-generational housing model for the Morro El site, that combines educational opportunities (both in the existing charter school building and other campus facilities) intended to include recreational options for a vibrant community… To open the opportunity to create affordable housing options for the community, including SLCUSD District employees. This effort is intended to bring teachers, staff, and their families, into the community they serve.”

The proposal is to have a private company, a so-called “For Profit Entity” or FPE that would be connected with the District’s fundraising arm, San Luis Coastal Education Foundation, to oversee the District’s installation of the infrastructure. The FPE would then act as management of the development.

“This model is sustainable,” reads the report, “relieving the District of any operational role in the day to day management.”

Resident Wants to Save the School

During the Board’s Sept. 1 meeting a local resident, who said she attended Morro Elementary, asked that the Board hold off on any decisions and allow her to gather forces and raise money to reimburse the District and allow the community to keep what she called a “cultural and historic” site.

Indeed, Morro Elementary was built in the 1930s and served the community until it was closed in 2001. Today, the school’s large grassy field is used for youth and adult sports, with the churches and charter school using the buildings.

Pinkerton was cool to the idea. “While setting up a group to fundraise for the site is a well intentioned desire,” he said, “it is not a realistic option. Nor does it help us with revenue generation.”

So what’s up next? Pinkerton said they would be meeting with City officials to get their input and take that to a future School Board meeting. “We need to find out about zoning, development requirements and overall planning needs,” he said. “They will have to make a decision at some point based on the information they receive to move forward or not with one of the options.”

If readers feel this idea is moving along with little input from the public, Pinkerton said that won’t be the case as it progresses.

“I’m sure that if any development does occur,” he said, “there will be public meetings and an opportunity for the public to weigh in, as there are in all developments in the city.

“Of course, our Board of Education meetings are also all public meetings where this information will also be shared.”