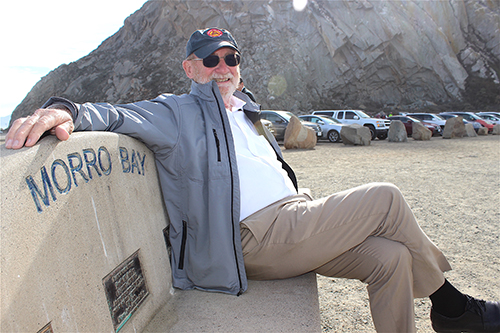 He brings a wealth of experience in the areas of local, county and state government — both elected and appointed — academia and especially environmental policy, and now he’s begun his first term in the California State Senate.

Dist. 17 State Sen. John Laird was in Morro Bay recently, during a tour of his extensive senate district and in particular to meet with local officials and representatives of Vistra Energy, owners of the Morro Bay Power Plant and applicants for the world’s largest Battery Energy Storage System or BESS.

Sen. Laird took a few minutes Oct. 20 to speak with Estero Bay News before heading over the hill for events in Atascadero and eventually a long drive home in the rain.

Sen. Laird explained over coffee at The Rock Espresso Bar that he was born in Vallejo in the Bay Area and raised in Santa Rosa. His parents were teachers, he said, and he was raised by his mom. When he was old enough she went back to teaching and worked in education until her retirement.

He attended U.C. Santa Cruz. “I was in the fourth graduating class at Santa Cruz,” he recounts. He left Santa Cruz for an internship in Washington D.C., he says and when that was over he went to work for the County Administration in Health and Social Services. In 1981 he was elected to the Santa Cruz City Council where he served for nine years, including two terms as mayor before terming out in 1990.

“I did everything you could” on the council, he says. That includes working on subcommittees on things like transportation and water for most of those nine years.

He was on the Council during the October 1989 “World Series Earthquake” (officially the Loma Prieta Earthquake).

That 6.9 temblor was centered in the Forest of Nisene Marks State Park, located just 10 miles from Santa Cruz. His City sustained significant damage, as did the Bay Area, which included the collapse of a section of the double-decker Nimitz Freeway in Oakland.

After holding elected office, Sen. Laird says he went to work for the County and was elected to the Cabrillo College Board of Trustees in Aptos. He was also a professor at UC Santa Cruz teaching environmental policy.

He’s done a lot of things in his life, he says, including working for a local NPR Radio on the drive-time show. “I’ve always been actively involved in the community,” he says.

In 2002, he was elected to the State Assembly where he served on the Budget Committee and termed out after 6 years.

He also served as a member of the State Integrated Waste Management Board from 2008-09.

In 2011, Gov. Jerry Brown named him to head the State Natural Resources Agency, a cabinet post and a huge job that oversees dozens of agencies including Fish & Wildlife, Coastal Commission, Energy Commission, State Parks and Recreation and the State Water Resources Control Board. He feels that his varied experiences helped prepare him for his work in the Legislature.

“I was the only cabinet member to last all 8 years” with Gov. Brown, he says with a bit of pride.

Despite the varied district he isn’t concerned about having the boundaries redrawn after the 2020 Census redistricting. “The District is right on the population cut,” he says, “within one-tenth of a percent within the population limits for senate districts.” The Dist. 17 population stands at 987,581, but he adds, it depends on what happens with surrounding districts whether or not the boundaries are changed.

As a leading environmentalist in the State Government, Sen. Laird says he is very interested in a couple of energy projects being pursued — offshore wind and the battery facilities.

The district already includes Vistra Energy’s Moss Landing BESS, a 300-megawatt facility in Moss Landing that is currently the largest in the world.

The proposed Morro Bay BESS would be double that capacity and Sen. Laird sees it as an integral part to the State’s shift to “more renewable power.”

He also supports the offshore wind farm being worked on by the Federal Government as to licensing a 399-square mile area — the so-called “Morro Bay Call Area” — in federal waters, 30 miles off the Coast from San Simeon.

“I’m supportive,” he says of the wind power proposal, “there are obviously things to work out, that’s why I co-authored the Offshore Wind Bill” (with 35th District Assemblyman Jordan Cunningham, who also represents SLO County and several others).

Assembly Bill 525 directs the California Energy Commission to study and establish 2030 and 2045 goals for electricity generated by offshore wind. It also requires the CEC to work with other agencies — namely the Coastal Commission — to develop a 5-part strategic plan for offshore wind development and submit the plan to the Natural Resources Agency and Legislature by June 30, 2023.

As for the wind farm(s), President Biden recently issued an executive order that called for over 4 Giga-watts of offshore wind energy development in the

Pacific Ocean but Sen. Laird acknowledges there are issues.

A man issue will be where to locate the necessary large maintenance facility that a Cal Poly feasibility study said would need to be 40-50 acres, with a deep-water port and large waterside area for a floating work quay.

Offshore wind turbines are enormous structures and 4 GW of capacity would require some 4,000 of them.
No such place exists in SLO County and Sen. Laird, when asked where that maintenance facility might be located, said “Port Hueneme.” That’s in Ventura County at Oxnard, and if that’s where the maintenance yard is most likely to go, the thousands of “good paying union jobs” promised by the President won’t happen in Morro Bay, where the electricity is slated to be brought to shore to connect with the state energy grid at the shuttered Morro Bay Power Plant.

So Sen. Laird, the former secretary of natural resources, finds himself again in the middle of efforts to protect the environment as the State pursues the parallel goal of renewable energy development.

“It’s always been an issue,” he explains, “if you have wind and solar, they peak at certain times. The question is whether you can store energy at peak times for later use, and for that we need battery storage.”

On the education and budget committees, he’s worked with school districts on re-opening after the pandemic closures, increasing financial aid to get them back to pre-pandemic levels.

The State just passed “the best budget for education in recent memory,” he says.
He’s also been involved in helping decide how the State will spend a huge budget windfall of some $75 billion, with $25B in reserves. He says they’ll spend roughly half that money on “pressing problems.”