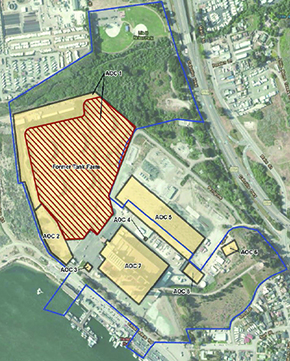 Aerial map of the Morro Bay Power Plant property shows ‘Areas of Concern’ identified by the Department of Toxic Substances Control and denoted in the shaded areas. The red shaded area is the old tank farm where DTSC did extensive testing of sol and groundwater. It’s also where Vistra Energy wants to build a battery storage plant. Map by DTSC

The state agency that regulates and oversees the use and clean ups of toxic substances, has issued its final report on the closed Morro Bay Power Plant, opting to leave whatever pollution was found in place.

The State Department of Toxic Substance Control or DTSC, on June 21 issued its “Final Remedy Selection and Final Statement of Basis” for the Morro Bay Power Plant’s continuing decommissioning, after the 1950s-era gas powered plant closed for good in 2014.

Given the changes in ownership of the approximately 110-acre site, which has been sold and resold a couple of times since Duke Energy North America got it from Pacific Gas & Electric in 1998, deciding who is responsible for what has been complicated.

Today, Vistra Energy owns the majority of the property including some switchyard facilities, and PG&E still owns a portion, which has an active substation with high voltage transmission wires entering and leaving the plant and connecting with the power grid. Vistra’s switchyard was tested and is part of the DTSC’s order.

That PG&E switchyard however, was not part of DTSC’s investigations or orders, but would be investigated when it eventually closes and is removed, too.

Also, the study does not include the 165-foot tall powerhouse building nor the 450-foot tall smokestacks. Those too would be investigated when they come down, which Vistra and the City have agreed would happen within a few years. Otherwise, Vistra has to pay the City some $3 million.

DTSC split the property into six “areas of concern” (AOC) and tested each one to gauge the levels of contamination found in both the soil and groundwater. The majority of the sites tested clean.

However, the main area of concern was also the largest of the sites, and includes the land where the plant’s fuel oil storage tanks were once located.

Those tanks were removed years ago, and it’s the same location where Vistra hopes to build the world’s largest lithium-ion battery energy storage facility (BESS), with a capacity of some 600 megawatts.

That BESS project is just starting with environmental review by the City, which recently awarded a consulting contract and is now taking comments on what residents want studied in the EIR.

The final report also does not include metal waste cleaning ponds, where chemicals used to clean out the boilers was emptied to cool before being trucked away. The ponds underwent these same investigations back in 2008 and were given a “clean closure” designation, meaning they found no toxins.

But DTSC’s not done yet with the site. “DTSC will select a final remedy after reviewing and considering all public comments submitted during the public comment period and the public meeting,” reads its order.

The order gives a brief history of the site. “Prior to PG&E’s purchase of the MBPP site in 1951,” the report said, “the site was owned and occupied by the United States Navy and used as an amphibious training base [during WWII]. PG&E purchased the MBPP site in 1951 and construction of the power plant began in 1953.

“The MBPP first began producing electricity in 1955 and PG&E continued to use the MBPP as a power generation facility until 1998.

Interest in ownership was transferred from Dynegy to Vistra Energy in April 2018, and the site owner underwent an administrative name change to MBPC in November 2020.”

The history leaves out that the plant was purchased from Duke by LS Power, and Dynegy absorbed LS Power soon afterwards. Nevertheless the plant appears to have operated pretty cleanly for a major industrial site.

“During PG&E’s ownership of the MBPP,” the report said, “chemical storage and handling, as well as solid and hazardous waste disposal, were managed in accordance with applicable regulatory requirements. Occasional small spills and leaks that occurred as a result of routine operation were addressed as they arose.”

As part of the sale to Duke, DTSC said, PG&E undertook a “Phase 1 Environmental Site Assessment,” and some sites were found that were polluted.

“Environmental conditions included both onsite and offsite areas,” DTSC said, “such as the landfills, the Marine Terminal Pipeline, and the Upper Tank Farm. Based on the Phase II ESA findings, eight areas of the site warranted further evaluation.”

The Upper Tank Farm referenced is located on a hilltop off Hwy 41 just east of the City Limits.

What did they find with all these investigations? “The media of concern are soil and groundwater. These media have detections of chemicals used historically at the facility for operations and maintenance including petroleum hydrocarbons, metals, polycyclic aromatic hydrocarbons, pesticides, and volatile organic compounds, which were identified as chemicals of potential concern (COPCs) in the risk assessments.”

DTSC tested the soils and groundwater at the AOC sites against the potential risk to human health, and how such toxins might travel through the soil and groundwater, with the standard of continued industrial reuse.

It did not analyze the sites for contamination levels that would be acceptable for residential redevelopment — a much higher standard — which pretty much locks in what uses the property can have in the future.

Instead they studied the property with the assumption it would remain in industrial use and opted to file a “Land Use Covenant” or LUC with the County Assessor’s Office that would “not allow permanent or temporary lodging, a hospital or other health-care facility, school, day care center for adults/children, park, playground, or other recreational use at the site.”

This is on top of a covenant PG&E holds over the site, stating in essence that it always retains the industrial zoning. Also, the LUC prohibits the groundwater there from ever being used for drinking water.

During its decades of operations, the plant used groundwater that was distilled — flashed into steam — in a small plant that produced ultra-pure water for use in the boilers.

It also used the groundwater wells for its firefighting systems, which includes a water tank in the southeast corner of the plant, near the end of Morro Avenue.

DTSC’s work has found little concern in terms of human health risks. “The HHRA,” the report said, “identified that there was no- to low-risk to the receptors listed above in all the evaluated AOCs, assuming the industrial/commercial uses evaluated and an associated Land Use Covenant in place to prohibit groundwater as a drinking water source.

“The low-risk scenario was for AOC 1 soil [at the tank farm], and only in one location with an exceedance of total petroleum hydrocarbons in the middle distillate range. Because this exceedance could be easily mitigated and is spatially bound in a small area, the net result was determined to be reasonably addressed by the industrial/commercial scenario evaluated, and no additional remedial action was recommended for any of the media in any of the AOCs.”

And, DTSC said only a portion of the tank farm site showed soil contamination above residential use levels, and the groundwater there is clean enough for drinking water use.

But, “because there are chemicals present at the Site in soil in a portion of AOC 1 at concentrations greater than residential levels, the entire Site does not meet the conditions for unrestricted land use. The ‘No Action’ alternative is, therefore, not viable.”

So overall the power plant’s been given a relatively clean bill of health by DTSC, at least until Vistra takes down the stacks and the power generating building, and exposes soils that haven’t seen the light of day since the 1950s.