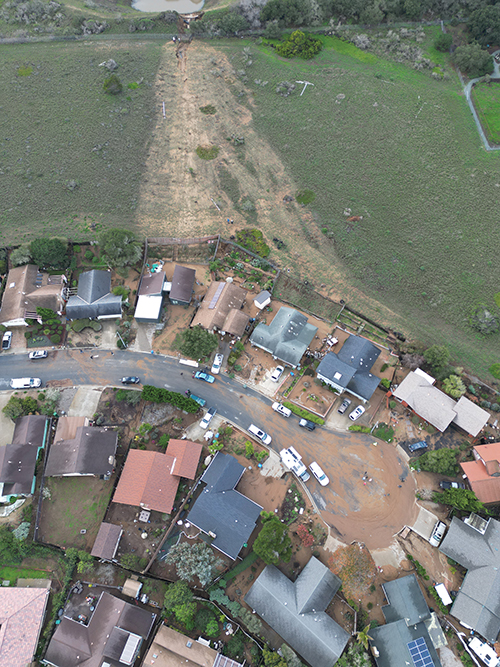 About 20 homes in Los Osos were damaged by a mudslide on Jan. 9 following intense rainfall resulting in levy breach. Photo by Bob Crizer

By Theresa-Marie Wilson and Neil Farrell

SLO County got pummeled by a successive set of storms with high winds and torrential rain that left a path of destruction from mudslides to flooding and power outages. Officials declared a countywide state of emergency.

About 20 homes in the Vista de Oro Estates in Los Osos were damaged by a mudslide when a levy wall collapsed in the late afternoon on Jan. 9 forcing an evacuation (see photos).

Resident Alice Stone and her son were in their home when the wall of mud and water hit.

“It sounded like a heavy roar,” Stone said. Her catio, an enclosed patio for cats, was destroyed, but all the cats were safe.

“It was total devastation inside the houses,” said EBN Publisher, Dean Sullivan who was on the scene. “Residents were walking around in what appeared to be a state of shock or disbelief. Several people I talked to said that their insurance wouldn’t cover it.

“Many people came with shovels to help in anyway they could. It was very moving to witness.”

In some cases, water, mud and debris was about 3-feet high in the homes.

In Morro Bay, the City officials declared a local emergency. Most of the major roads in and out of the city were flooded and closed.

“Pacific Gas & Electric had to cut power to Morro Bay and portions of Los Osos due to flooding of their local infrastructure,” the City’s website stated on Jan. 9. Power was restored later that evening.

The State declared a state of emergency for California, and the Federal Government (FEMA) extended a federal emergency declaration to SLO County for this storm event. More information will follow once officials submit reports and assessments of landmarks.

•• A search continued on Jan. 10 for Kyle Doan, a 5-year-old boy who was swept from a car passing on a flooded stretch of road near San Marcos Creek on Jan. 9.

“The search operations had to be discontinued yesterday after approximately five hours because the extreme weather conditions were making it unsafe for first responders to continue their efforts,” said Sheriff’s Spokesperson Tony Cipolla in a news release. “A break in the intense storms is allowing today’s search which will involve all available resources of the Sheriff’s Office including the USAR (Underwater Search and Rescue) Team and air operations. The conditions, however, remain extremely dangerous. The water level is high and continues to be fast moving.”

•• On Jan. 10 at about 8 a.m., Morro Bay Police were contacted regarding a possible deceased person inside of a stored boat on the property. Officers arrived on scene and located a 78- year-old male inside of a boat unresponsive. Fire arrived and confirmed male was deceased. Cause of death is undetermined. Investigation is ongoing.

•• A person died in Avila Beach on Jan. 9 along Avila Beach Drive after their vehicle got caught in floodwaters.

At least two roads were closed temporarily last week after a fierce storm dropped over an inch of rain overnight in Morro Bay causing localized flooding and toppling over a Downtown street tree.

The storm that hit Jan. 4 and raged overnight caused flooding on State Park Road, and the State Parks Department closed the road until it was safe to drive over. The flooded location was not at the Chorro Creek Bridge area, formerly called “Twin Bridges” before it was built nearly 30-years ago. That site often flooded and closed off the only direct route between Morro Bay and Los Osos.

Since Twin Bridges was replaced with the Chorro Creek Bridge, Chorro Creek has not flooded there, but it has flooded State Park Road numerous times, collecting in a low spot.

Also, a City tree toppled over in the 900 block of Main St., at Horizon Realty and the Morro Bay Appliance Store. City crews barricaded off that entire block of Main Street, while the tree was removed and the area cleaned up.

According to a post on the MBFD Facebook Page, the ocean was roiling too. “The waves crashing over the Morro Rock jetty are spectacular, but being in the water wouldn’t be! Take care out there,” the post said.

Though there’s been no official declaration that the recent drought is over, having so much rain this early in the season is no doubt a good sign for a state that’s still heavily reliant on groundwater sources and whose reservoirs and lakes have dropped to really low levels over the past couple of years.

As of press time on Jan. 10, conditions were as follows:

• HWY 1 is mainly open through town, and folks can get in and out of Morro Bay in both directions

• State Park Road is closed with an undetermined opening date.

Another storm is expected to hit the county, ironically, on Friday the 13th. Officials urge residents who live near creeks or moving waterways to keep an eye on the situation and be prepared to evacuate.