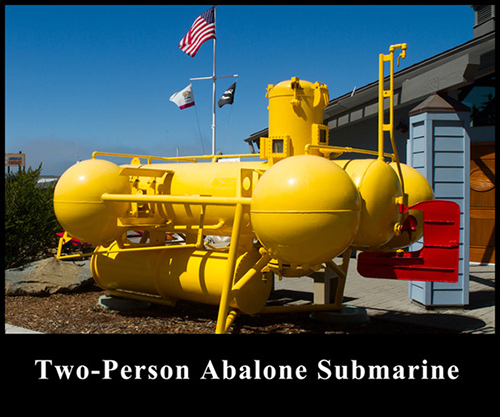 “You’ve come a long way, baby!” Corny, yes, but true when we celebrate our Morro Bay Maritime Museum. If you haven’t visited MBMM since March 2020, you’ll be amazed at what the trustees have accomplished and excited to know more about their future plans in progress.

But first… Announcement! Announcement! Save these dates during October’s Morro Bay Maritime Month. The evening of October 6, indulge yourself at the 1st Annual Rock the Waterfront. Expect noshes to eat, adult beverages to drink, music by banjoist Gary Ryan and a silent auction of unusual items presented at the Morro Bay Yacht Club, a charter member of MBMM.

On October 8, the entire family is invited to the free 1st Annual Maritime Family Fun Day. It’s an all-community-produced carnival at the museum site kicked off earlier that morning when the tides are perfect to release the competitors in the 2nd annual Rotary Ducky Derby on Morro Bay. Reserve your breakfast spot on the waterfront in full view to see your ducky swim to the finish or be wrangled by a Dragon Boat. Then stroll towards MBMM’s presentation patio for the awards ceremony plus a full day of free, free, free maritime happenings at the Maritime Family Fun Day. Updates soon.

An historic reminder: it took 20-plus years of hoping and planning by founding members still involved, Larry Newland, Keith Kelsey and Jack Hunter, to realize a maritime museum on the Central Coast. Their small team of regulars spent years manning a booth at Morro Bay’s Harbor Festivals and then weekends explaining to locals and visitors why a humongous U.S. Navy submarine, the DSRV Avalon, was consuming prime parking spaces.

A little “wind beneath their sails” came when the City of Morro Bay designated a piece of adjacent unpaved parking lot for the group to relocate the submarine and get the Tugboat Alma out of the Harbor Department’s maintenance yard. Coincidentally, the Maritime Museum of San Diego decided to offer ticketed tours in Morro Bay for two weeks during the maiden Pacific Coast voyage of their recently crafted replica of Cabrillo’s San Salvador. By October 2016 a permanent future home for MBMM was fast-tracked. Stars aligned to begin raising the funds to “raise the roof” on its first structure. When the San Salvador sailed into Morro Bay, the entire community was ready to host the mega-waterfront event. San Diego Maritime donated tour proceeds, local students, residents, and visitors donated dimes-to-dollars and a charter member campaign designated as the 1542 Navigators banked the funds to open MBMM debt-free in September 2018. Membership dues, sponsored brick and bench sales, keep-the-lights-on donations, and volunteers telling maritime stories kept the doors open – free to the public.

Then, March 2020 shuttered visitations, but the little museum that could, decided it would. “We had a fairly new board of trustees,” said Bonnie Jones, treasurer. “We knew we had to think outside the box, literally, and figure out how we would manage without visitors supporting the gift shop and donations. We realized we needed to focus on opportunities that would attract visitors outdoors.”

Jones added, “We have an entire rack of maritime books in the museum store but once we could offer speaker presentations and book signings, people were back to see what we were doing. It also helps us that we’ve been able to sell over 1,000 copies of Joe Dunlap’s When Morro Bay Went to War and Stuart McDowell’s The Sinking of the Montebello.”

Since volunteers could no longer retell an exhibit’s significance, Mather interviewed representatives who had served on vessels displayed then linked their story up to a QR Code so visitors access the recordings even when the museum was closed. For example, Keith Kelsey served on the Tugboat Alma, Rich Pescatore told his DSRV story, and Morro Bay’s past president of the commercial fisherman group and now a MBMM trustee, Jeremiah O’Brian, explained how the Spindrift is representative of the typical fishing boat of his era.

“Did you notice the mooring display out front?” asked Mather. “Back in the 50s, at the height of the summer season, Virg’s Landing would take-on deep-sea fishing passengers at San Simeon Landing.” The donated mooring balls stand tall in the Embarcadero frontage area next to the DSRV. They attract visitors towards another new exhibit in progress – the Morro Bay Commercial Fisherman’s Association story about the fishing industry, the women’s fishery contributions and a history of the Harbor Patrol. Also pending its completion is the indigenous Salinan Tribe exhibit.

Mather Lori Video Services coordinated the video production of “Morro Bay ‘Once’ the Abalone Capital of the World.” Two presentations at the Bay Theater sold-out with representatives of the long-gone industry introduced and taking questions from the audience. If you missed the event, the video is available at the museum store,

A grant from the City of Morro Bay created the interactive maritime Kids Cove and Legos display. Wink, wink!! Parents, how about allowing your kids time to tie the nautical knots, please?

Ryan laughed remembering when a teacher locked herself up in the Kids Cove and one of her high school students said, “Best school day ever.” She added, “Don’t forget Jim Costanza (a volunteer) showed up one day with several donation boxes he had built.” The group has strategically placed them near more exhibits to gently remind visitors they can offer a thank you gift. “Visitors have been generous.”

In his poem “Stopping by Woods on a Snowy Evening,” poet Robert Frost wrote, “And miles to go before I sleep.” MBMM’s trustees are sitting on historic gold with no place to share it. Negotiations are active to expand their lease space. May 2022 the original SurviveOars dragon boat was donated. Also, a WWII Quonset hut has been pledged. MBMM’s proposal to the City includes more indoor exhibits:  a turn-of-century fishing shack outfitted with period equipment; a visual display of the merchant steamship era when founder Franklin Riley would row his products out to a Pacific Coast transporter; a multimedia theater/meeting room earmarked for nonprofits and city usage; a maritime research library; and a static diorama display of the US Coast Guard rescue boat and Morro Bay Harbor’s retired boat.

Although the Rock the Waterfront and Maritime Family Fun Day is October 6 and 8, you don’t have to wait to check them out. MBMM is open Thursdays-Mondays from 10 a.m. to 3 p.m. Contact www.morrobaymaritime.org or link up on Facebook for the latest information.