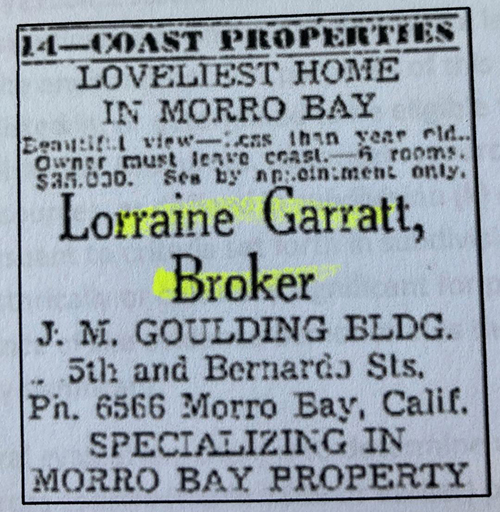 The Historical Society of Morro Bay and Morro Bay City Council will soon dedicate an open space area at the far end of Morro Street to Franklin Riley (1824-1897). This natural parkland is a popular walking area for residents and tourists offering a pathway that overlooks the harbor, a stairway to Tidelands Park and the Embarcadero, and a photo-perfect view of Morro Rock. Why was this area the most appropriate to be named for the founder of Morro Bay?

The answer to my question was documented in an historical property evaluation my family needed to have researched before receiving a remodeling permit from Morro Bay’s Planning Department. We selected historical consultant Paula Juelke Carr. She was local and had a 30-year track record, including determining if 50-plus year-old homes have cultural heritage stories qualifying them for a listing on the California Register of Historical Resources. Carr’s research unearthed interesting reading about Franklin Riley and the five previous owners of our property during the designated period; however, its story was determined historically insignificant.

Those were the days when some California homesteaders won their land in a saloon poker game. Others came upon empty space and set down roots by building at least a shack. At the end of the Mexican War in 1848, the Treaty of Guadalupe Hidalgo allowed land once controlled by Mexico to become available for homesteading by United States residents. The Homestead Act of 1862 required filing an application, improving the land, and then filing for a deed of title.

Franklin Riley was the first to apply, comply, and develop the central California coastal acreage that he would call Morro Townsite. He established his home in 1864, but it was 1872 before he hired Carolan Mathers to create the first parcel map for Morro Bay. Mathers was a local county “road viewer” with surveying experience. Riley intended to “create a commercial hub for shipping agricultural produce (grown in the area) and importing lumber and other necessities not available.”

Local historians Dorothy Gates and Jane Bailey wrote in Morro Bay’s Yesterdays, “The town of Morro Bay was booming in 1872 and 1873…(residents) looking for farmland…” Another historian and journalist Myron Angel noted, “…Morro exceeded every other place in the county…fourteen dwelling-houses, two stores, two blacksmith shops, one shoemaker shop, one carpenter shop, and a butcher shop.”

Several San Francisco businessmen formed the Morro Bay Improvement Association to sell lots along Morro Street, but the small sites appeared to be temporary lots for Central Valley visitors to pitch tents and get out of the heat. By 1888 most of the parcels had been purchased and a new parcel map that is still used today was created. Development, however, stalled during an 1890s lagging economy.

In 1933 when Atascadero’s founder constructed Hwy 41, known as the “E. G. Lewis Highway,” Morro Bay was promoted as a respite from the heat. A SLO County Chamber of Commerce publication announced Morro Bay was “…a beautiful summer resort, a fertile garden district and a dairy stronghold…with modern improvements and a seaside hotel.”

The 1920s-built Highway 1 also prompted a short-lived building boom. James Goulding created Morro Bay’s first real subdivision bordered by Piney Way and Kings, but another historic interruption occurred – the Wall Street Crash in 1929. Morro Bay had only 400 residents by December, 1937. And although Franklin Riley had found buyers for almost half of his Morro Townsite holdings by 1888 development wasn’t documented until April, 1927.
H.A. and Maude Gallupp held the note on what would become our property. Before building on it, they sold it to William and Irene McCowen in 1927. There appears to be a flurry of transactions within this mapped subdivision of Morro Townsite maybe sold by William to other family members and buyers.

William had originally emigrated from Ireland. Irene was a widow with a toddler girl and baby son in 1922 when she sailed from Liverpool to America, indicating Terra Bella, CA was her destination. She married William in 1927. Possibly parceling off his acreage allowed him to purchase and operate the boat San Antonio as he was listed as a fisherman. A house and garage had been built by 1928. In 1940, the census listed the family had five children. But in 1949 Irene was granted a divorce and the deed to the property.

Raymond and Adelie Shaffer became the next owners in 1950. He grew up in Mystic, CT and married Adelia in 1933 while in the Army stationed in New Jersey. Her family was from Santa Fe, NM where the couple lived until 1940 when he accepted an welder job in a shipyard in Solano, CA. They relocated to Long Beach in 1948 where he was listed as a welder, but in 1950 he’s listed as a fisherman. He probably bought the Morro Bay property as a second home to fish the Pacific coastal waters, but suddenly retired near family in New Mexico.

In 1951 the Shaffers sold the property to Lorraine Garratt, who was either divorced or separated from Cyril Garratt at the time she purchased the property. Cyril was the sales manager of Luke Tractor and Equipment Company in Santa Maria in 1938, but when he registered for the draft in 1942, he was the Secretary of the San Luis Obispo Chamber of Commerce and the couple lived in Morro Bay. Lorraine had her real estate license and was a bookkeeper with an office in the J.M. Goulding Building at 5th and Bernardo Streets. She also owned a larger residence on Fairview, so it is likely she never lived in the smaller home in the Morro Townsite.

In December 1956, she sold it to Pearl Ward who was from Taft. Unmarried, she lived and operated Pearl’s Beauty Shop and Pearl’s Hair Fashions on the property until the early 1970s.

In 2012 we watched the Morro Bay Lighted Boat Parade from our deck with family and friends to celebrate the closing on our second Morro Bay property – this one allowing us a retirement home without multi-level living as we aged. We had no idea at the time when Randall and Sandy Kleinhammer, a locally established real estate couple, sold us their property that it was once a lot-line mapped onto Franklin Riley’s original Morro Townsite. We thank him for his foresight for what Morro Bay could be and appreciate a walkable park will continue to document where it all started – maybe dedicated even as soon as November, 2021.