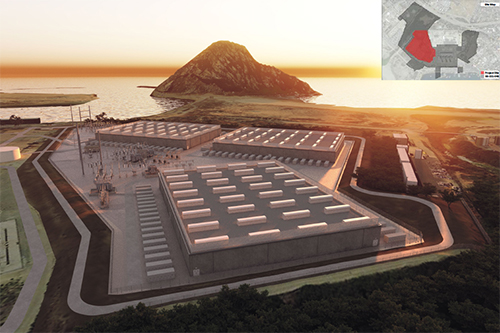 Morro Bay could become home to the largest electric battery system in the world, if a project being proposed by the owners of the Morro Bay Power Plant is built, bringing a windfall of tax monies to a city left financially reeling due to the coronavirus pandemic response and near shutdown of the tourism economy.
Representatives from Vistra Energy made a presentation to the City Council Jan. 26, proposed a massive, 22-acre complex with three, 40-foot tall buildings, each some 91,000 square feet.
For comparison, Spencer’s Market in Morro Bay is 15,000 s.f., and the Family Dollar and Dollar Tree stores share a 19,000 s.f. space.
Vistra spokesman, Brad Watson, told the Council, “This is a major infrastructure project.”
Indeed, the company’s recently completed “Battery Energy Storage System” or BESS project at the Moss Landing Power Plant at 300 megawatts capacity is currently the largest such facility in the world.
The project being proposed for Morro Bay is 600MW and would double Moss Landing’s capacity, though Vistra is also trying to build another 100MW BESS in Moss Landing.
Their plan is to get the Morro Bay BESS online by 2024 to coincide with the closure of the Unit 1 reactor at the Diablo Canyon Nuclear Plant. To do that, Watson said, “We need to start on the property next year.”
That may be easier said than done, as the project, which is being sited for the northwest side of the 107-acre power plant property, roughly covers the plant’s former tank farm area.
The plant had five, giant fuel storage tanks grouped on that area, but those were removed years ago when the now-defunct Duke Energy North America owned the plant. It’s the same spot where Duke had tried to get permits to install a 1,200 MW combined-cycle, natural gas-powered plant.
Though Duke spent over 7 years and an estimated $35 million, it never did get a permit from the State to build its project. Duke eventually sold the plant and it’s changed hands a couple of times through corporate mergers before being shuttered forever in 2014. The plant property was up for sale for the past several years.
Now Vistra, which absorbed Dynegy in 2018, is in charge and this company is making great strides across the nation and in Canada and Japan, turning towards renewable energy and sustainable sources, of which battery storage is essential.
Eric Cherness, who assisted Watson in their online presentation, noted that BESS projects increase the reliability of energy sources like solar and wind. Those renewable means of producing electricity have drawbacks in that they can only produce energy when the sun shines or the wind blows and often produce energy when demand is low. With a BESS, that energy can be briefly stored and fed into the power grid when needed.
The company’s presentation said the project would have 2,400MWh of capacity in 180,000 lithium-ion batteries. The batteries are grouped into “racks” and enclosed inside the buildings, each with its own room. The three buildings being proposed total 273,000 s.f. Again as a comparison the parking lot at Spencer’s is about 170,000 s.f.
Each building will have extensive fire suppression systems, as Lithium-ion batteries have been known to overheat and catch fire.
Vistra estimates the project to cost $500-$600 million and will result in a value of some $450 million for property tax purposes.
That means they expect the BESS to generate about $4.8 million a year, of which the City of Morro Bay would get 10.26%, or some $490,000 a year. That would be a welcomed boost for the City, which has spent down its reserve fund to bridge the gap in funding caused by the pandemic response.
City Manager Scott Collins told Estero Bay News that as he understands it, the taxes are calculated through a complex formula that ties in with the amount of energy it handles. “It’s a moving target,” he said. “But it’s somewhere in the $400,000 range.”

Collins was cautious not to sound over-eager, as the project has a long ways to go before being approved and built.
Among the hoops the project will face is a full environmental impact report, planning reviews, approvals from not only the City, but the Coastal Commission, California Energy Commission, and just about every other agency in the state and federal governments, just as the failed Duke replacement project faced.
Vistra said it expects 300 workers will be on site during the height of construction, with an average of 100 through the duration of the build. When it goes online, they’ll have just 15 employees.
The “Workforce is expected to come from the local area,” according to Vistra’s slide presentation. “We anticipate increases in local business revenues given the size and duration of the construction work force.”
It’s anticipated the job will use union workers like heavy equipment operators, electricians, pipe fitters, welders, and more. On such jobs, even simple laborers could make $28 and hour or more.
Many of these jobs see workers come into town temporarily, often pulling travel trailers or driving RVs and staying in local RV parks, returning home on weekends.
It’s somewhat of a gypsy lifestyle, but specially skilled workers like these go to where the big construction jobs are and also work on outages at power plants across the state and nation.
The 600MW BESS will store enough energy to power 450,000 homes, according to Vistra.
Sifting through the project details, each of the “low-profile” buildings would be 30-feet high, 350-feet long, and 260-feet wide, some 91,000 s.f. each.
Each building will have 10-feet of equipment on the roof that would be screened, giving the buildings a 40-foot tall profile.
Asked about this, Community Development Director Scot Graham told EBN, “The max height is 30 feet, but the project is located in a Planned Development overlay area where they can request changes to the development standards that apply to the project.”
Each of the three buildings will contain approximately 2,400 battery racks, and 60 “Power Conversion Systems” will surround each building.
The PCS are needed, Watson said, because the energy is stored in “direct current” or DC form, and must be converted to “alternating current” or AC in order to match the power grid.
The BESS will also hook up to Pacific Gas & Electric’s substation on site, which will step up the current from about 34 kilovolts to the 500KV to be transmitted over the high voltage transmission lines that exit the rear of the plant and head eastward to connect with the power grind in the Central Valley. This means that no new wires would need to be strung.
“The substation,” City Manager Collins said, “is what makes it feasible.” It’s also why Vistra wants to time its project to coincide with Diablo Canyon’s retirement, to support the power grid.
Collins noted that fire danger is a big consideration for the City and noted that the City Fire Marshall and Fire Chief will be part of the team that works on the project.
The first BESS project that Vistra proposed in November 2019 was subsequently withdrawn in January 2020. That project was just one, 2-story building, and 200 MW, so this new one is three times the size and capacity.
There’s also the issue of land use, as the power plant is considered a “coastal dependent use” because of its former use of a once-through seawater cooling system. Without that distinction, is this even allowable here?
“It will likely require some type of land use change,” Graham said. “We are in discussions with Coastal Commission staff regarding this issue.”
So how much money in fees would a $500 million project bring to the City? Graham said, “Planning fees are approximately $12,700 excluding environmental. EIR is going to be somewhere around $150,000 rough numbers. Haven’t run building fees. Property tax will be somewhere in the neighborhood of $400,000 to $500,000 per year.”
The siting of the project will also bump up against the area where the City wants to put in recycled water injection wells, part of its $131 million Water Reclamation Facility or WRF project. Collins said the Vistra project would not impact the City’s well field, which is the subject of a lawsuit the City filed against Vistra under the eminent domain doctrine. The City offered to pay $200,000 for three permanent utility easements and two temporary construction easements.
Collins noted that the BESS project was in its infancy and there’s a whole lot more to go before any dirt gets moved around. “There will be lots of opportunities for people to comment and engage on it,” he said. “There’s a lot of steps before we get there.”
Asked about Vistra’s stated goal of being up and running by the end of 2024, Collins said, “The timeline is the timeline. We feel it’s more important to follow the right process and that people be able to comment.”
Vistra’s slide show includes a section on the company’s community generosity. “Guided by Vistra Corporate Giving Policy,” reads the slide, “we address community needs through investments that provide meaningful, direct, and sustainable social benefit and align with our business priorities.”
Vistra said it’s “committed $10 million over the next five years to support the advancement of business and education in diverse communities; donated over $2.1 million to non-profit organizations in 2020, including funds allocated to our over 50 power plants across the U.S., empowering our employees to direct funding in local communities; raised nearly $2 million in annual 2020 United Way and TXU Energy Aid giving campaign; and volunteered nearly 1,000 hours in 2020.”
Collins said he didn’t know what kinds of community benefits the City might be able to negotiate from Vistra. “If it moves forward,” Collins said, “the city council would hear from the community about that.”

← Previous: Maritime Museum Wants to Expand Batteries at the Beach →