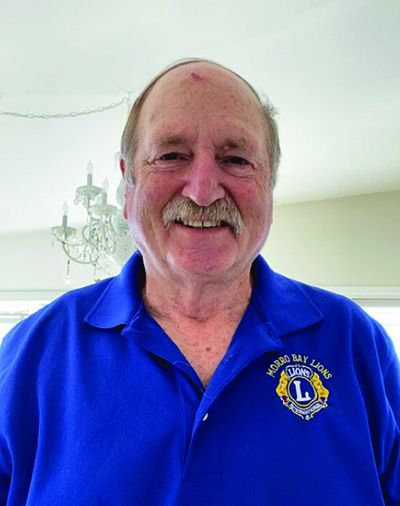 The Morro Bay Chamber of Commerce honored Chuck Stoll as its 2020 Citizen of the Year.

The Morro Bay Chamber of Commerce has named its 2020 community award winners, adding a new award for non-profits. But due to the coronavirus pandemic response, they can’t be feted in the usual way.

The Chamber named Community volunteer Chuck Stoll its 2020 Citizen of the Year; Jack Smith the 2020 Living Treasure; FitnessWorks/TherapyWorks as Business of the Year; and Morro Bay in Bloom as the first winner of a new “Non-Profit of the Year” Award.

The awardees would normally be honored at the Chamber’s Installation Dinner, dubbed, “Morro Bay’s Big Night Out,” a themed, gala, sit-down dinner with live music, local cuisine, auctions, the swearing in of the Chamber’s new Board, and attended by local and political dignitaries.

But with such gatherings prohibited, the event will be virtual.
“Like most events in the last year,” the Chamber said in a news release, “the Chamber has had to reimagine how to recognize those in the community who are making a difference and has transitioned the traditionally in-person event.”
The Internet gathering will be at 5:30 p.m. Friday, Feb. 12. The ceremony will be broadcast live on Charter Cable Channel 20, produced through AGP Video.

“The 2020 awardees,” Erica Crawford, Chamber President and CEO said, “have selflessly contributed to our community through their generosity, stewardship and resiliency during the pandemic. It is important that we show up and let these people and businesses know that even though we can’t be together in person, that they are just as important as recipients from years past.”
Chuck Stoll is being honored “for his generosity of time and resources to benefit all people of Morro Bay.”
Stoll is involved in multiple organizations and causes “that provide important services to our community, including the Morro Bay Lions Club, where he serves as club president and from which he was presented the Melvin Jones Award for Outstanding Humanitarian Services,” the Chamber said.

Stoll is also on the board of the Morro Bay Maritime Museum, uses his truck to fill large tanks of water for newly planted trees with Morro Bay in Bloom, drives to and from the Food Bank each week for supplies and coordinates eye care for patrons of the Monday Night Dinners for the homeless. Stoll is also involved in the Lions Club’s Car Giveaway Program, which accepts donations of unneeded vehicles and money, repairs the cars mechanically in conjunction with Todd’s Garage, and coordinating with the Community Resource Center, gives them away to people in the community who need transportation.
He also volunteers at the annual free Community Thanksgiving Dinner.

Fitness Works is being honored “for their adaptation of services during the pandemic,” the news release said.
FitnessWorks/TherapyWorks is a female-owned business that was first incorporated in 1991 and currently employs 42 people but when there isn’t a pandemic closing the economy, they employ over 50 full and part-time people.
“Community health is their priority,” the Chamber said, “and the management team infuse their values of fairness and integrity into their operating model.”

Among the adjustments they’ve made for the pandemic to assist their clients with fitness goals, they’ve been offering online fitness-on-demand taught by familiar instructors in familiar surroundings; rented a cargo container that is filled with cardio machines and sits in the parking lot; moved large pieces of equipment into the alley behind the gym; and offered group fitness classes in the parking lot and in City parks.

“FitnessWorks adapted its business model to remain compliant with public health guidelines during the ongoing COVID-19 pandemic,” according to the Chamber.

Jack Smith, who grew up in Morro Bay, is a skateboarding pioneer who operated the Morro Bay Skateboard Museum and has hosted several World Slalom Skateboarding Championships in Morro Bay.
He first achieved fame when in the 1970s he and some high school classmates were the first people to push skateboards across the U.S.

He’s since done it three more times raising money for charity and was the first person to cross the country riding an electric-powered skateboard.
Two of his cross-country skateboards are among the collection at the National Museum of American History at the Smithsonian Institute in Washington, D.C.

The Chamber said Smith’s, “natural affectation as an aspirational and inspirational leader has led him to incredible accomplishments, including skateboarding across the country multiple times and achieving a Guinness World Record.”

Nicknamed “the Bloomies,” Morro Bay in Bloom’s numerous volunteers have for several years now worked to beautify public areas in town including the Roundabout, the traffic islands at Beach Street and the Embarcadero, planter boxes and other streetscapes in the Downtown. They are being honored for their efforts to beautify Morro Bay’s public spaces.

Also, AGP Video, the Chamber’s Business of the Year in 2003, is producing a mini-documentary on community leadership in Morro Bay slated to debut at the virtual awards ceremony.

The Chamber thanked Engle and Associates Insurance Brokers, Central Coast Lending, Kitzman’s Culligan Water Co., and Carollo Engineers, for sponsoring production of the video.
Estero Bay News wishes to congratulate all of this year’s awardees and wish them well in 2021.