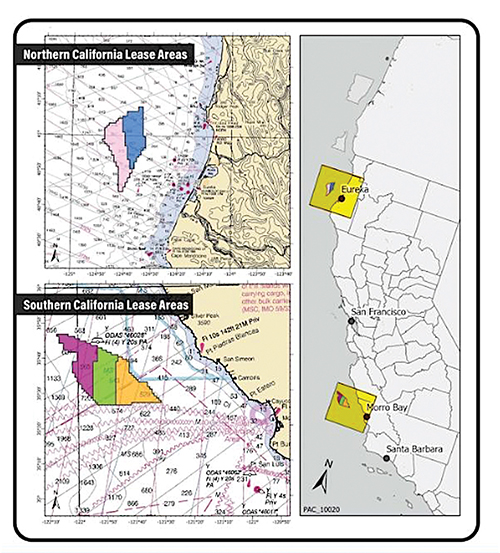 These nautical charts released by BOEM show the locations of the five offshore lease sites BOEM sold for $757 Million.

After delaying it for over a year, the Federal Government finally conducted its auction of offshore wind farm leases, but the company that came up with the idea in the first place and has been working with Morro Bay, missed the cut.

Castle Wind had signed an agreement of support and the Company has donated thousands to local causes, in Castle’s efforts to win a lease.

Each company is expected to install 1 gigawatt of wind turbine capacity and the so-called Morro Bay Wind Area, a nearly 400-square mile patch of ocean some 20-30 miles offshore, would have 3 GW.

The five lease sites off California were the first such offshore wind energy leases that the Bureau of Ocean Energy Management (BOEM) has ever done off the West Coast.

It’s the third offshore lease sale BOEM has held this year. The West Coast sales totaled $757.1 million, according to BOEM. An earlier sale off the Coast of New England brought in over $4.5 billion.

Secretary of the Interior Deb Haaland, who oversees BOEM said, “The Biden-Harris Administration believes that to address the climate crisis head on, we must unleash a new era of clean, reliable energy that serves every household in America. Today’s lease sale is further proof that industry momentum — including for floating offshore wind development – is undeniable.

“A sustainable, clean energy future,” Haaland continued, “is within our grasp and the Interior Department is doing everything we can to ensure that American communities nationwide benefit.”

Who Are These People?

All three of the winning bidders here are major players in the renewable energy game, with one company being owned by a foreign country, though a friendly one to the U.S.

It is primarily a petroleum company, operating in 36 countries and one of numerous oil companies that formed LLCs to go after the offshore wind leases. See: www.equinor.com for more on the company.

Molly Morris, President of Equinor Wind US said in a news release, “We are delighted to get the opportunity to explore the potential for producing even more renewable energy for the U.S., this time in the Pacific Ocean.

“The U.S. West Coast is one of the most attractive growth regions for floating offshore wind in the world due to its favorable wind conditions and proximity to markets that need reliable, clean energy.”

Offshore wind on the West Coast could help achieve the state’s clean energy goals, bolster renewable energy sources, and create new jobs and investments in California. The U.S. is a key market for Equinor’s offshore wind activities and one where we aspire to be a leader in growing this new energy industry.”

According to its website, see: www.offshorewindca.org, “Offshore Wind California is a coalition of industry partners with a shared interest in promoting policies and public support for responsible development of offshore wind power in California.”

Adam Stern, the Executive Director for Offshore Wind California, said, “Today’s final auction results are great news for California’s offshore wind industry, workers, and electricity ratepayers. This is the most consequential milestone yet for the Golden State’s efforts to make offshore wind a key part of its diverse clean energy future, and meet its ambitious planning goals to generate up to 5 GW by 2030 and a nation-leading 25 GW by 2045.” See: www.offshorewindca.org for more on the company.

Invenergy California Offshore LLC, according to its website (see invenergy.com), is a subsidiary of Invenergy, “a leading privately-held developer, owner, and operator of sustainable energy solutions.”

“Invenergy,” the company said, “and its affiliated companies develop, own, and operate large-scale renewable and other clean energy generation and storage facilities in the Americas, Europe and Asia. Invenergy’s home office is located in Chicago, and it has regional development offices in the United States, Canada, Mexico, Spain, Japan, Poland, and Scotland.”

Joshua Weinstein, the Vice President and Head of Offshore Development at Invenergy, said, “We are thrilled to be a provisional winner in BOEM’s first offshore wind lease sale on the West Coast. We will bring Invenergy’s two decades of development experience to this project, working in close collaboration with coastal communities and stakeholders to build on our community investment track record to deliver clean, reliable energy to California.”

Sales Not Yet Final

Final sale prices are actually not yet set, as the government has included several allowances and incentives to bidders to get discounts off their bids.

Speaking on the credits, BOEM Director, Amanda Lefton said, “The innovative bidding credits in the California auction will result in tangible investments for the floating offshore wind workforce and supply chain in the United States, and benefits to Tribes, communities, and ocean users potentially affected by future offshore wind activities.

“This auction commits substantial investment to support economic growth from floating offshore wind energy development — including the jobs that come with it.

According to BOEM’s news release announcing the sales, “The auction also included 5% credits for bidders who committed to entering community benefit agreements [CBAs]. The first type of agreement is a Lease Area Use CBA with communities, stakeholder groups, or Tribal entities whose use of the lease areas or use of the resources harvested from the lease areas is expected to be impacted by offshore wind development. “

Ironically, Castle Wind (now called Trident Wind) CEO Alla Weinstein hatched the idea of floating wind farms in 2016, when she approached BOEM, the State Energy Commission and City of Morro Bay about leasing the ocean and using facilities at the power plant.

The City and Trident Wind had reached a preliminary understanding with the City of Morro Bay and had also reached an agreement with the Morro Bay and Port San Luis Commercial Fishermen’s Organizations just this past Oct. 19, forming something called “Morro Bay Lease Area Mutual Benefits Corp. It would appear to have been exactly what BOEM wanted.

“The second type of agreement,” according to BOEM, “is a General CBA with communities, Tribes, or stakeholder groups that are expected to be affected by the potential impacts on the marine, coastal or human environment from lease development.”

Engaging with the local community is important in this process. “Under stipulations in the leases, lessees are required to engage with Tribes, ocean users, and local communities that may be affected by their lease activities. Lessee engagement must allow for early and active information sharing, focused discussion of potential issues, and collaborative identification of solutions. These communication and engagement activities must be routinely reported to BOEM.”

The government actually expects all the ocean users to get along. “These lease stipulations are intended to promote offshore wind energy development in a way that coexists with other ocean uses,” BOEM said, “addresses potential impacts and benefits, and protects the ocean environment, while also facilitating our nation’s energy future for generations to come.”

Readers shouldn’t think huge wind turbines are going to be installed anytime soon, some experts believe it will be 6-7 years to get done. In 2016, Weinstein had predicted it could take 10 years.

The new leaseholders must now develop a conceptual project and do full environmental impact studies, and go through a permitting process. It’s unclear at this point what the permitting process will be under California’s rather stiff environmental laws. At some point, it’ll have to come to the Coastal Commission, once the transmission lines cross into State Waters. And Morro Bay will also have something to say about it, when the cables want to come ashore.

The companies will also need to find someplace to build a maintenance and assembly yard, which a Cal Poly study said needed to be about 40 acres, and adjacent to a deep water port.

Such a place currently doesn’t exist in SLO County and the likely place it will be built is Port Hueneme in Ventura County. Morro Bay Harbor could probably accommodate workboats and crews, as well as control room facilities.

Indeed, the Harbor Department recently got a big grant intended to upgrade the North T-pier to meet the needs of these wind companies, the details of which have not been worked out with these new companies.

The companies, if they bring their cables ashore through the power plant’s outfall canal, will have to lease the use of that structure, which is a State Tidelands Trust property.

Duke Energy, which unsuccessfully tried to replace the power plant, had agreed to pay the Harbor Department $250,000 a year for that lease, which only lasted a few years before Duke gave up on California and sold its four plants and fled the Golden State.

The companies will also have to develop manufacturing plants, and a reliable supply chain, as many of the materials needed for these wind turbines — from steel for moorings and towers, to composites for fan blades, and components for the electronics — come from overseas.