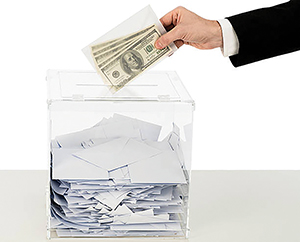 Morro Bay’s November City Council Election likely won’t set any records for fundraising or spending, but several candidates for the mayor and two council seats have gotten some decent support for their runs at office.

Among his biggest expenses are an ad buy in Morro Bay Life at over $1,000 and $1,500 to Rock Harbor Marketing for website and social media PR work.

It should be noted that all of these candidates received numerous donations of $100-$150 and some number of donations under $100 that don’t have to be itemized in the reports.

Wixom’s biggest expenses so far have been $1,700 in newspaper ads from Estero Bay News; and $1,000 to Goofy Graphics of Morro Bay for yard signs.

In the City Council race for two open seats, Sarah Robinson raised a little over $2,200 from July 1 to Sept. 24. Robinson reports getting $200 from Richard Hawley of Cambria; $500 from Barry Branin and wife Vivian; $300 from former Councilwoman, Betty Winholtz; $250 from Dan Sedley; and $250 from Councilman Jeff Heller and wife Kerry (Heller declined to run for re-election).

Her biggest expenses have been $500 with Goofy Graphics for yard signs and $150 to ASAP Reprographics for brochures.

Council hopeful Cyndee Edwards reported $6,500 in total money contributions plus loans of over $1,500 for a total cash supply of some $8,100.

Her biggest donors have been Jean Ryan of Morro Bay for $400; Ginny and Greg Palmer for $500; Monica and Jamie Irons of Morro Bay with $250; Lisa Marie Huey of Pismo Beach donated $1,000; Jacque Leonard at $250; Sheila Tranquill of Morro Bay at $250; Sharon Buffo of Los Osos at $200; Joan Pederson of Morro Bay at $200; former Councilwoman and current Executive Director of Pacific Wildlife Care, Christine Johnson gave $250.

Edwards donated $280 for her campaign kickoff party. She paid Bill Luffee of Promotion Plus, Inc., $1,000 for lawn signs and the City of Morro Bay charged her for $420. She’s also hired Rock Harbor Marketing for Internet work at $1,500.

His only listed expenditure was $230 to Hay Printing of Morro Bay for campaign literature.

And the other Council hopeful, David Duringer, filed a Form 470, which declares that he will not receive or spend over $2,000.

As for other election issues and political groups the “Committee for Morro Bay Harbor Parcel Tax Measure B-22,” — a $120 per year property tax on all private property in town to support the City Harbor Department’s maintenance needs — has raised the most money of all, reporting monetary contributions of over $19,200; with non-monetary contributions of $1,500 for a total of over $21,800.

And another political group in town, Citizens for Affordable Living or CAL filed a donations report that was full of zeros. The group, which is opposed to Measure B-22, reported no contributions from Jan. 1 to June 30 but does have over $500 on hand.

CAL was formed in 2018 to fight the City’s Prop. 218 vote on its Water Reclamation Facility (WRF) project. The effort fell short and the WRF is now almost completed. CAL has been active in recent months issuing Newsletters discussing current events in the city and four of its members drafted the ballot argument against the B-22 tax measure.