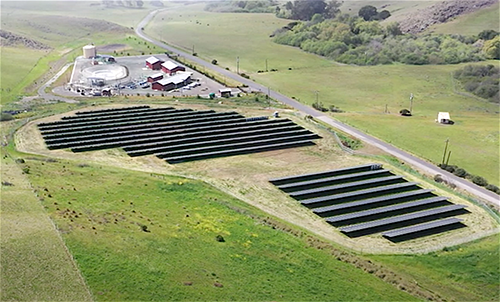 The Cayucos Sanitary District finished another phase of its new sewer treatment plant, shining further light on the district’s project.

The CSD recently flipped the switch on a 1-megawatt solar power plant adjacent to its new wastewater treatment plant on Toro Creek Road, fixing the plant’s energy costs for the next quarter century.

CSD General Manager Rick Koon told Estero Bay News the plant was installed by REC Solar, a division of Dune Energy. “We have a 25-year, ‘Power Purchase Agreement,’ in which they provide us power at 8.2 cents a kilowatt hour and they can feed into the grid the excess,” Koon said.

The plant cost over $2 million, and Koon said REC Solar paid for it to be installed on land owned by the District.

The plant uses fixed solar panels, which means they don’t track the sun as it moves across the sky.

The solar farm started up about 7 months after the CSD stopped sending its flows to the treatment plant on Atascadero Road, which it jointly owns with the City of Morro Bay.

The CSD officially switched over to its system at noon on Sept. 14, 2021, according to the agency’s website.

If readers are curious about Cayucos’ “Water Resource Recovery Facility” the CSD posted a pretty cool flyover video of the plant and solar farm on YouTube, see: www.youtube.com/watch?v=kLYfAEM7wuM.