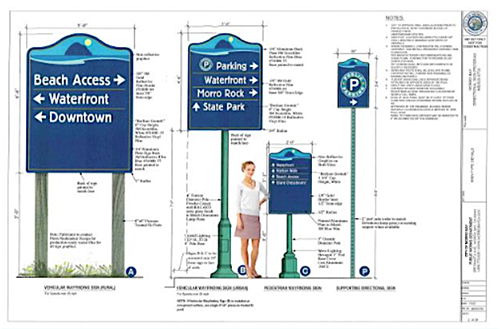 The City of Morro Bay, in an apparent attempt to help lost tourists find their way around town, is seeking bids for a $150,000 “wayfinding” signage project.

The City’s “request for proposals” or RFP is due back by 2 p.m. Thursday, Aug. 12 for the contract that entails manufacturing and installing the metal signs, which from the plans looks like there would be about 35 new signs installed across the city.

The project is being paid for out of monies the City Council approved for economic development, according to the City Manager, Scott Collins. No general fund tax monies are being used for the project, he added.

“The work shall include but is not limited to furnishing and installing custom roadway directional signs, poles, foundations, removing and/or relocating existing roadway signs, and patching sidewalk,” reads the City’s RFP.

The contractor will have to order the signs from a list of acceptable manufacturers and poles, and once delivered, will have 40 days to complete the work or face penalties of $200 a day paid to the City for the delays.

The contractor will have to order the signs, which the specs spell out in some detail. They have to be aluminum, with a retro-reflective sheeting, in translucent ink, and have an anti-graffiti coating. The text on the signs must be white, and the background in blue, with a gold border. The back and sides must be painted blue and in a polyurethane paint made by Mathews Paint.

Some poles will be metal with other, larger signs on wood posts. Most of the signs would be 4-foot tall and be on 7-foot poles for a total of 11-feet in height. The signs would be about 3-1/2 feet wide and have the City’s logo — Morro Rock in silhouette with the sun setting behind it and blue water in the foreground.

They would use arrows to point the way to places of interest — the beach, waterfront and the Downtown for example.
Each sign could have different text depending on its location and all would include arrows pointing to such places as public parking lots, the state park and Giant Chessboard.

It will be at least the third signage project the City has undertaken and part of this project would be to remove those old signs, many of which still stand in the Downtown and the Waterfront.

For years many have said the City needed better signage to direct tourists around the community.