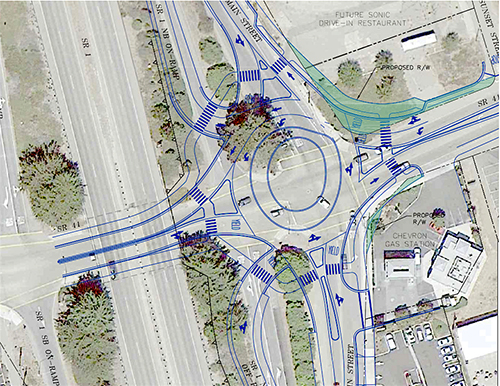 This rendering shows how a roundabout at Main Street and Hwy 41 would be situated in the intersection.

It’s becoming more and more of a problem, as tourism increases along with local traffic flow, and now the City of Morro Bay is applying for a big State grant to try and finally get a roundabout installed at Hwy 41 and Main Street.

The City and San Luis Obispo Council of Governments (SLOCOG) have been trying for about 20 years to find a solution to the intersection that also serves as the main entryway to Morro Bay by tourists coming from the Central Valley.

“This intersection serves as the principal gateway to Morro Bay from the Central Valley,” reads a staff report from City Engineer Rob Livick, “our primary source of tourists. It is also the only route to Morro Bay High School, which generates significant vehicular traffic during the morning, lunch, and afternoon peak hours.

“Pedestrian and bicycle volumes have grown steadily at this intersection with the increased emphasis on ‘Active Transportation’ modes.”

Caltrans and the Federal Highway Administration have authorized a “Preliminary Assessment, Environmental Documentation” (PA&ED) and “National Environmental Policy Act/California Environmental Quality Act” (NEPA/CEQA) environmental review. This work is in progress and expected to wrap up soon.

SLOCOG has paid for the PA&ED as well the NEP/CEQA work. That still leaves another piece of red tape to conquer — getting a right of way agreement out of the owners of a former Shell gas station site, that’s been vacant for over 20 years, but has been approved for a Sonic Burger restaurant.

Though that project has been conceptually approved, it’s sat in limbo since 2017, with a new permit extension recently granted by the City to April 2021.

“Required rights-of-way,” Livick said, “will be acquired as a condition of development for the adjoining property, because of the impact such development would have on the intersection.”

What if Sonic Burger doesn’t get built? Livick said, “If the property is not developed, then there is sufficient project budget to acquire the property. Failure to complete PA&ED, project design and ROW acquisition may result in loss of anticipated infrastructure construction funding.”

The project, which has had its doubters in the community since first proposed, has now climbed to an astonishing $7.9 million and would completely rebuild the intersection. But it’s a long ways to fruition, as the City is applying for $3.75M grant through the State’s “Active Transportation Program” or ATP, Cycle 5, created by Senate Bill 99 “to encourage increased use of active modes of transportation, such as walking and biking.”

SB 99 culled together several different Federal transportation funding sources, including for bike lanes and pedestrian projects, among others.

Should the City get the grant, it plans to tap a combination of local, regional, and federal funds to get the rest of the money.

Livick said this Cycle 5 funding is expected to have some $440 million and is culled from Federal monies, State SB 1 transportation monies, and State Highway Account, covering the next four fiscal years (through 2023/24).

“The goals of the ATP,” Livick said, “include, but are not limited to, increasing the proportion of trips accomplished by walking and biking; increasing the safety and mobility of non-motorized users; advancing efforts of regional agencies to achieve greenhouse gas reduction goals; enhancing public health; and providing a broad spectrum of projects to benefit many types of users including disadvantaged communities.”

The roundabout is expected to reduce greenhouse gasses being emitted by idling cars, as people wait for the other guy to go before entering the 4-way stop intersection.

The Hwy 41-Main roundabout originated with a traffic study the City undertook in the early 2000s to improve that intersection, as well as Quintana Road and Morro Bay Boulevard, and Main and San Jacinto, which includes a stoplight on the highway.

A roundabout was determined to be the best solution for all three intersections, but the City Council at the time, rejected a roundabout at Main and San Jacinto.

It was also leery of the Main/Hwy 41 roundabout due to the high school students that flood the intersection during the school year.

However, with the Measure D rebuilding program at Morro Bay High, the plan is to close the school at lunchtime and provide all food service on campus, as part of a new security plan and closed campus.

So students flooding the intersection at lunchtime would seem to be a moot point, though foot traffic before and after school is still an issue.

The City Council moved ahead with the MBB-Quintana Roundabout, though it voted six times on the project. And while it’s had its challenges, including some who travel entirely too fast through it and others who fail to yield to traffic already in the roundabout, it has overall worked well, despite the occasional fender-bender.

The idea was that roundabouts slow traffic to a crawl so any accidents that do occur, would be minor, as opposed to a 4-way stop and the potential carnage of a T-bone crash.

And if readers are wondering how a roundabout could possibly fit at Main and Hwy 41, it should be noted that the drawings at this time show the intersection being completely rebuilt.

John DiNunzio of SLOCOG said the costs have risen so much because of Caltrans, which has been helping on the engineering and design with the intent of keeping open both the on and off ramps to Hwy 101.

DiNunzio said the design requires retaining walls on the ramps, which has added greatly to the costs.

Asked why the center of this roundabout isn’t round, DiNunzio said the modern traffic circle can be teardrop shaped or as in this case, oval, depending on the layout.

The design shows a hairpin turn for a car traveling south on Main Street that wants to go north on Hwy 1, and DiNunzio said it may be that large trucks or semis with double trailers may have to take a lap around the roundabout to access the northbound ramp.

He added that Caltrans wants to keep both the ramps as well as the Main Street on/off ramp just up the street.

So far SLOCOG has some $3.9 million saved up for the project but DiNunzio said that like the Briscoe Road situation in Arroyo Grande, which is also looking at a roundabout, the time is coming when they won’t be able to hold that money any longer.

“It’s imperative that the City makes a good faith attempt to acquire the funding,” he said. “Paso Robles wants to use this money and there are bigger interchanges that see more people that could use this money.”

Once thought of as unusual, the modern roundabout is becoming a go-to solution. DiNunzio said there are now some 20 roundabouts being proposed across the county and they are being used more and more in new subdivisions, for example, a large housing project going in by the County Airport in SLO.

But Morro Bay led the way with the first roundabout in SLO County at Quintana and the Boulevard. “It was the first of any in the County,” DiNunzio said. “They are less expensive and safety is higher, and there’s less ongoing costs” as opposed to a stoplight, which somewhat ironically, he said they had enough money for right now.