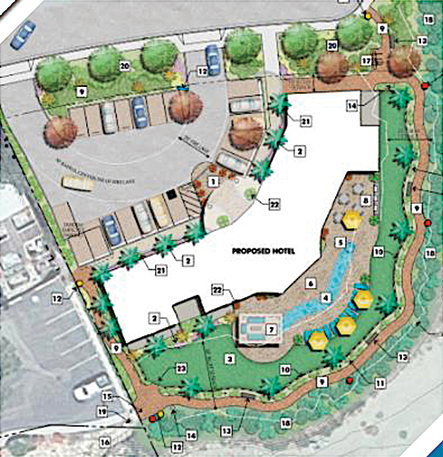 As expected, the Coastal Commission voted to take over the permitting of a proposed motel in Cayucos, adjacent to Cayucos Creek one of the last big vacant lots in Downtown Cayucos.

Forest Donovan, a coastal planner with the Commission based in Santa Cruz, said, “The Commission unanimously voted to find substantial issue and take jurisdiction over the CDP [Coastal Development Permit] application based on the staff recommendation and the identified issues. We will bring the project forward via de novo review at a future date pending staff resources.”

The Commission had already asked for the project’s file from County Planning Department in a letter dated back in April. The Commission staff had listed several issues they wanted the County to clear up and with the appeal filed on the project, will embark on what can be a lengthy process, in some cases lasting a year or more.

Among the issues the Commission raised was how the County arrived at a 38-foot setback from the beach for the project, which sits on a small bluff at the mouth of Cayucos Creek.

In letters to the County Planning Commission, it was revealed that the site has a great deal of fill dating back to the building of Highway 1.

“There are several potential problems with this approach and the setback applied,” the Commission staff said. They said it was “unclear how the 10-foot buffer was calculated.”

They also said the setback calculations didn’t account for increased erosion that could be done by the creek, which in winter can run several feet deep, swelled with rain runoff.

They also questioned the purpose of a retaining wall between the motel and the public path, that’s part of the design.

The commission said the wall raised questions “about whether this retaining wall is intended to and/or will actually serve as some type of armoring device,” the Commission staff said. Under the Commission’s sea level rise policy, they discourage of armoring the coast with features like seawalls and other methods to fight back the sea.

“In short,” the Commission staff said, “the County’s approval allows a large hotel facility on a dynamic bluff top, oceanfront, and creek-adjacent property subject to numerous coastal hazards risks, and the County’s approval raises questions about whether such risk was adequately accounted for in project siting and design.”

The Commission also wants to review the project’s conformance with Coastal Act requirements for lateral and vertical public access and providing “lower-cost accommodations,” which the Coastal Act also requires. However, the plan was to rent the motel’s available rooms as vacation rentals, which the Commission has in the past considered affordable because several families can split the costs.

The Commission received some 50 letters on the project, which were not available due to the Commission’s website having trouble displaying its reports and agendas.

Jay and Lisa Cobb are the applicants on the proposal to build a 17-unit, 3-story hotel/vacation rental project on the 1.1-acre parcel, located just north of the Cayucos Pier.

As currently designed, the motel building would sit back from the edge of the property and take up 0.7-acres of the site. The rest would be parking, a swimming pool and guest amenities, and a pedestrian trail overlooking the beach.

The site is bordered by condominiums on the west, the beach to the south and creek on east, with Ocean Avenue on the north side.

According to the County’s planning commission report, “One of the proposed units will be used as a manager’s unit for overnight management staff. The proposed structure includes three stories with a total of 20,114 square feet of floor area. The project also proposes a public scenic vista pathway and public recreation amenities. The proposed outdoor guest amenity area and the public scenic vista pathway will be physically separated by a retaining wall feature which will act as a border to the public pathway.”

It’s unknown when the project would be ready for a full appeal hearing before the Coastal Commission.

Above photo, a rendering of the proposed Cobb motel in Cayucos.