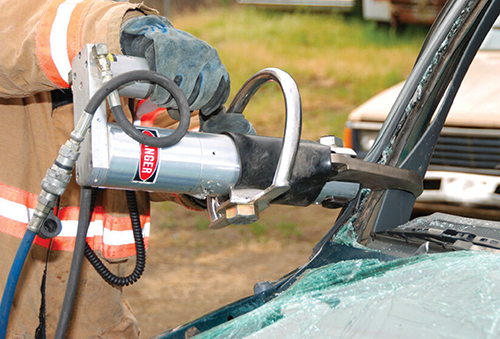 San Luis Obispo County Fire Department will hold a fire sale of sorts when it disposes of excess and unneeded fire equipment that includes hydraulic cutters and Jaws-of-Life tools.
The equipment comes from the County’s various firehouses scattered from San Miguel to Nipomo and is being stored at Station 98 at the Paso Robles Airport.
“County Fire has assessed each of the items on the attached list and recommend that they be declared surplus,” reads a staff report from the Jan. 5 Board of Supervisor’s meeting. “It is important that this equipment be re-marketed in an expeditious manner to optimize the resale value.”
Once Supervisors declared the items as surplus, it’s left to the County Central Services to arrange for the auction and the monies raised will go back into the County general fund.
The list of equipment that will be sold includes Hurst Power Units, free standing hydraulic pumps that power many of a firefighter’s rescue equipment such as the Laws-of-Life. The County has 18 of these for sale.
It has some 24 hydraulic reels, used to roll up fire hoses but can be used to reel up anything.
It has 17 hydraulic cutters; 11 hydraulic spreaders; a dozen hydraulic rams; and one Husqvarna 371K — a handheld, gas powered rescue saw that can cut anything from car bodies to concrete.
But by far the most equipment that the County will be selling is “self-contained breathing apparatus” or SCBA’s. Those devices allow firefighters to enter smoke-filled rooms to fight fires without succumbing to smoke inhalation. The County has some 175 SCBA’s to sell.
The where and when of the auction was not known by deadline, but the County is supposed to advertise the sale in the legal notices section of The Tribune newspaper.