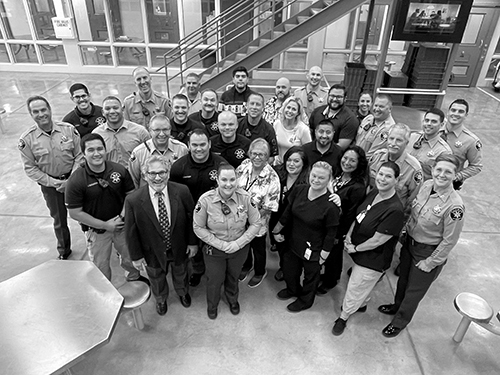 The County Sheriff’s Department is taking a victory lap over the improvements it’s made to improving health care for inmates, and earning a national accreditation for their and the County’s medical contractor’s efforts.

“The National Commission on Correctional Health Care,” Sheriff’s spokesman Tony Cipolla said in a news release, “has awarded national accreditation to the Jail for demonstrating compliance with NCCHC’s nationally recognized standards of care for correctional health services in jails.”

They had to pass a rigorous assessment. “During the assessment,” Cipolla explained, “a team of experienced physicians and experts in correctional health care surveyed the facility for compliance with jail-specific standards in several areas such as patient care and treatment, health promotion, safety and disease prevention, governance and administration, personnel and training, special needs and services, and medical-legal issues.

The Sheriff was happy to see their efforts rewarded. “We have a Constitutional obligation to provide health care to those in our Jail and we are committed to doing so with innovation, excellence and efficiency,” said Sheriff Ian Parkinson. “I salute our health care provider, Wellpath, our custody staff, and leadership for their hard work and dedication on behalf of our patients.”

For 40 years, Cipolla said, NCCHC’s highly respected standards have provided guidance to help correctional health professionals and administrators improve the health of their jail populations and the communities to which they return, increase efficiency of health services delivery, and strengthen organizational effectiveness. Getting accreditation has long been a goal of the Sheriff’s Office.

The coronavirus pandemic response, which hit Jails hard, “created its own set of unique challenges to the process,” Cipolla said. “However, it was only through a coordinated effort by custody staff and Wellpath that made accreditation possible.

Correctional Captain Stephanie Landgraf, who supervises the Jail, said, “This is a great example of the county and the Sheriff’s Office commitment to a safe and healthy County Jail that meets the changing and sometimes challenging demands of health care across the country.”

The County Jail, several years ago, went through a rough stretch where several inmates died in custody. One mentally ill inmate died after being strapped naked into a restraint chair for 2 days; and others died from existing serious medical conditions. There was also an overdose on illegal drugs at the Honor Farm.

Those deaths prompted the Sheriff’s Department and the County to take a hard look at their operation, in particular the available medical care at the County Jails and mental health care in SLO County.

That led to the old women’s jail — which was replaced with a new facility — being turned into a medical center and Wellpath being brought in to run it.

It would appear to have worked, as there have been no reported in-custody deaths at any of the County Jail facilities in several years.

The County Health Agency has also greatly increased available psychiatric beds for the mentally ill, contracting with several out-of-county facilities for available beds on demand. Such contracts are for millions of dollars.