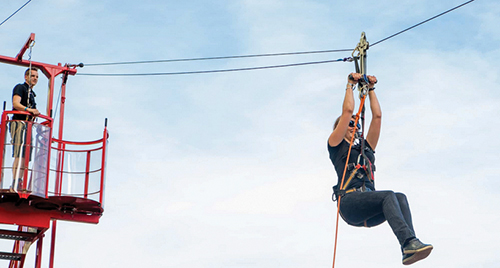 Near the close of 2021, Supervisors approved a 15-year contract with options for two, 5-year renewals with EcoLearn to install and operate two zip lines on a portion of the municipal golf course.

El Chorro Regional Park is 723 acres of rolling hills located off Hwy 1 across from Cuesta College. Dairy Creek was an 18-hole golf course built in the mid-1990s and became the County’s third public golf course, joining the Morro Bay Golf Course and Chalk Mountain in Atascadero.

But in recent years, especially during the recent drought, the County’s allotment of irrigation water was insufficient to keep all the grass growing and Supervisors rejected a proposal to use Whale Rock Reservoir water for irrigating the golf course.

And so in June 2017 the Supervisors approved a new programming plan for El Chorro and Dairy Creek that included dropping it down to a 9-hole course and using the extra land to build other entertainment facilities.

TopTracer is essentially a practice range, elevated, with computerized tracking of shots that can be translated into a video game for multiple players. It has become very popular in a short amount of time.

“County Parks has the opportunity to initiate a Concession Contract with EcoLearn for the construction, installation and management of zip line facilities in El Chorro Regional Park at Dairy Creek Golf Course.”

EcoLearn also operates Vista Lago Adventures at Lopez Lake in another contract with County Parks (see: vistalagoadventurepark.com) and Franco said they have been “good park partners at Lopez Lake.”

EcoLearn has been successful with the zip lines at Lopez and Franco added that the County staff would have no responsibility for the repair and maintenance of the Dairy Creek zip lines.

The terms of the contract are that the County will receive 5% of the annual gross receipts the first year, increasing by 1% annually to 8% in the fourth year. The County expects to get $17,000 the first year, $22,400 the second; $35,000 the third; and an unknown amount beyond that.

Franco said they consulted with the Cal Poly Golf Team on where to locate the zip lines and also got the OK from the National Parks Service to install zip lines.

El Chorro Regional Park is actually owned by the National Parks Service (as part of the original Camp San Luis) and deeded to the County, but the agency has restrictions on what can be done there.

Franco said their plan for repurposing El Chorro and Dairy Creek, which included remodeling and reopening of the golf course’s restaurant by the owners of The Siren in Morro Bay (renamed The Siren at El Chorro, see: https://thesirenelchorro.com) is working well.

“The activity at Top Tracer has increased demand for additional active outdoor recreation and there are few similar facilities in the county,” Franco said. “It is anticipated that these facilities will be popular for campers, day use visitors to the park and those attending events at the park. They also will tie in nicely to existing features and the new features that will be added in the future consistent with the Programming Plan.”