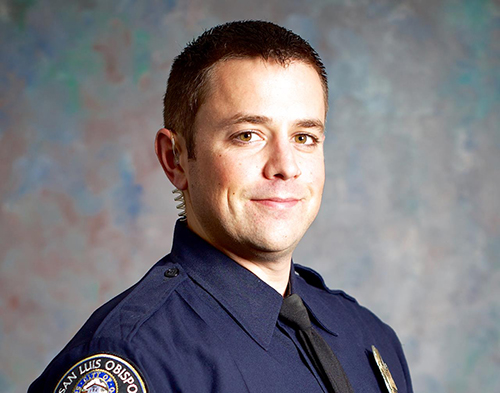 San Luis Obispo Police Detective Luca Benedetti was shot and killed while serving a search warrant on May 10.

A GoFundMe Page has been established for a San Luis Police Department detective killed in the line of duty.

Det. Luca Benedetti, who at 37 was a 12-year law enforcement veteran, was shot and killed while attempting to serve a search warrant with five fellow officers on May 10. It was about 5 p.m. when officers responded to an address on Camellia Court to search for suspected stolen items from a string of commercial burglaries committed over the previous week, according to a news release by Christine Wallace, the department’s media coordinator.

“As the officers approached the apartment,” Wallace said, “they provided ‘knock and notice’ identifying themselves as law enforcement… After an extended period of time and having received no response, they forced open the front door.”

They walked into an apparent ambush. The suspect, “was laying in wait and began to fire shots at the officers from inside the apartment,” Wallace said.
Det. Benedetti leaves behind a wife and two young daughters.

The San Luis Obispo Police Department Police Officer Association and the San Luis Obispo Regional SWAT team setup the donation page Det. Luca Benedetti Family Relief Fund for the sole purpose of providing financial assistance to the Benedetti family going forward in their time of need. As of May 18, it had already raised nearly $553,000.

“Our community is heartbroken,” said Mayor Heidi Harmon in a news release following the incident. “Detective Benedetti loved this city and bravely gave his life so that we could live in peace and safety. Luca’s children have lost their father so we could be safe. We will hold Detective Benedetti and his family in our hearts forever.”

Det. Steve Orozco was injured in the incident, and was transported to Sierra Vista Hospital where he was treated and released that same night. He is expected to fully recover from his injuries, Wallace said.

The suspect, identified as Edward Zamora Giron, 37, was later found dead inside the apartment of an apparent self-inflicted gunshot wound. He was also reportedly hit by police with return fire, Wallace said.

As for the initial reason police knocked on Giron’s door — the burglaries — police reportedly found numerous items suspected of being stolen in those cases.

“We appreciate their assistance through this difficult time,” said Acting Chief Brian Amoroso. “Having an outside agency conduct the investigation is a standard practice for officer involved shootings and we are cooperating fully with their investigation.”

Det. Benedetti joined the San Luis Obispo Police Department in 2012 and before that served for four years with the Atascadero Police Department. He was a traffic investigator who’d worked several high profile pedestrian vs. vehicle accidents in recent years, as well as vehicle burglaries and catalytic converter thefts, among numerous other crimes.

He was also honored in 2017 as a “Top Cop” by Mothers Against Drunk Driving (MADD), for making 116 DUI arrests. The follow year he was again honored when he made 48 DUI arrests.

The community was invited to attend funeral services, post press time, on the morning of May 20 at the Cal Poly Performing Arts Center, which was followed by a first responder procession to a private graveside service.