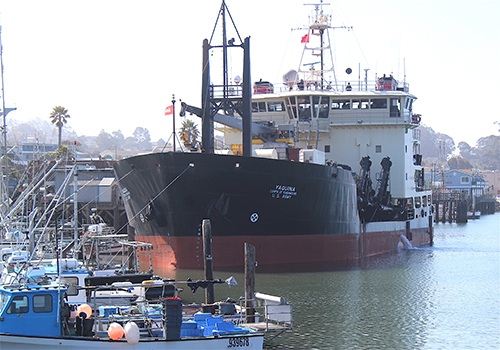 Filler up! The Yaquina, an Army Corps of Engineers dredge ship out of Portland, Ore., takes on fuel at the Morro Bay fuel dock. The 200-foot ship towers over the fishing boats in the foreground docked at the City’s Beach Street Docks. Photo by Neil Farrell

She came to town from her homeport in Portland, Ore., to help keep Morro Bay’s harbor entrance passable and safe.

The Army Corps of Engineers’ dredge ship, Yaquina, was here in late May to early June doing her annual clean out job at the harbor mouth, part of a continuing project to tame big breakers that can roll across the bar and be treacherous for boats.

Yaquina was here for a 22.5-day job, according to Harbor Master Eric Endersby, work that is secured annually through the city’s lobbying at the annual C-MANC conference in Washington D.C. That conference is attended by representatives from all the major California ports, of which Morro Bay is among the smallest.

Every year the extent of the job is determined first by the available budget and second by soundings taken by an advance crew of the harbor mouth. The project design calls for keeping the mouth about 40-feet deep, a depth arrived at by an ACOE modeling study.

Endersby said this year the budget was $2.8 million and while most of the work was at the entrance, the ship did dig out some of the area at the small groin at the end of the Sandspit, where shoaling takes place and threatens to pinch off the entrance channel.

Part of the reason for the annual maintenance dredging is to be sure the Coast Guard is able to enter and exit the harbor for its missions of search & rescue, and patrolling the offshore, security zone off Diablo Canyon Nuclear Power Plant.

It’s a duty Coast Guard Station Morro Bay picked up with its move into the Department of Homeland Security after the Sept. 11, 2001 terrorist attacks and the formation of the DHS.