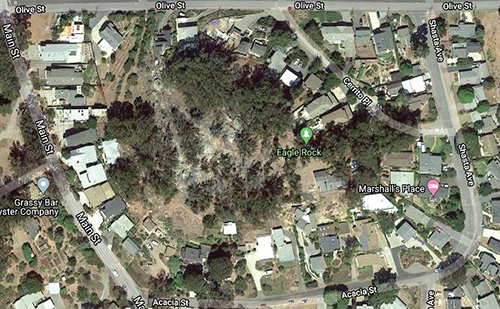 Eagle Rock, above, as shown on Google Maps

The Morro Bay Open Space Alliance (MBOSA) announced recently that its efforts to conserve a local promontory in open space is now official and the land protected forever.

MBOSA said its fund-raising campaign to raise $265,000 and buy a conservation easement from the City of Morro Bay for “Eagle Rock” (a.k.a. Cerrito Peak) was reached in Spring 2020 and this past April, the easement was officially recorded on the deed.

The easement protects the top of Eagle Rock, which is a Native American sacred historic site, and offers a sweeping view of Morro Bay Harbor and Estuary — from Morro Rock to Los Osos.

“This conservation easement will ensure that no development occurs on this parcel and is binding on all owners, current and future,” MBOSA said in its news release. “Local Native American tribes visited the rock and used it in ceremonies eons before the current stands of eucalyptus appeared, and they still consider it sacred. Today those eucalyptus provide shelter to migrating monarch butterflies, as well as hawks, osprey and owls.”

MBOSA raised the money through some 175 donations both “large and small.”

Eagle Rock is part of the “Seven Sisters” chain of extinct volcanoes that runs from Morro Rock to Islay Hill in SLO. The volcanoes went extinct million of years ago. What’s left are barren granite domes like Morro Rock and majestic mountains like Hollister Peak and Bishops Peak.

“MBOSA has ensured that current and future generations of Morro Bay residents will be free to climb and enjoy this unique formation in its undeveloped state,” the group said.

MBOSA is also involved in the mother of all conservation efforts in the Estero Bay Area — preserving Chevron’s extensive land holdings that hug the eastern side of North Morro Bay and its southern edge with the old marine terminal property.

Several conservation and government agencies, MBOSA and the Cayucos Land Conservancy are all working on the effort to keep Chevron’s hillside lands in open space, and preserve a valley that spans eastward from Del Mar Park.