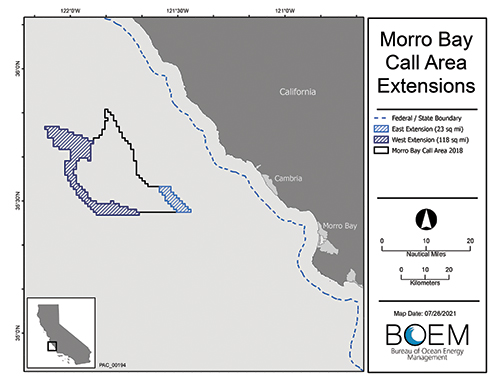 The Federal Bureau of Ocean Energy Management (BOEM) is calling for public input on a proposal to expand an already proposed area 30 miles offshore from San Simeon for expansion of an additional 191 square miles to accommodate some 4 gigawatts of floating wind turbine. The new area is adjacent to the originally proposed site.

The federal agency that regulates offshore wind farms plans to expand a potential site off San Simeon that has been identified as a potential site where the giant floating turbines can be installed.

President Biden’s Administration is calling for the development of 30 gigawatts of wind energy production offshore of the Continental U.S., including nearly 400 square miles in a spot about 30 miles west of San Simeon and abutting the Monterey Bay National Marine Sanctuary’s southern end. The two new areas would add some 191 square miles (90,025 acres) to the original call area of over 300 square miles.

That so-called “Morro Bay Call Area” has already been proposed for the development of a 1 GW (1,000 megawatts) floating wind farm by Castle Winds, a partnership between Trident Wind and the German energy company, EnBW North America, nearly 10 years ago.

But while Trident Wind may have been the first to ask for a license to do offshore wind on the West Coast, the federal Bureau of Ocean Energy Management or BOEM, has a process to go through before it can lease U.S. lands and that includes asking other potential customers to bid on it. When they did, some 11 companies responded.

BOEM is now asking for information and nominations from the public and industry “to determine industry interest in commercial offshore wind energy development for two new areas.”

The term new areas might be confusing to readers who have followed these developments, but the initial Morro Bay Call Area was about 320 square miles and the additions to the original area brings it up to 399 square miles.

The other new call area is off Humboldt County in Northern California.

With Castle Wind’s proposal, assuming the availability of 10 MW turbines, 1,000 MW would require 100 of the 600-foot tall turbines, more for redundancy. The new call area is designed to allow over 4 GW of turbines, which would mean at least 400 of the turbines would be needed. That’s a far cry more than Castle Winds’ relatively modest proposal of 100 turbines.

BOEM will be accepting public input through Sept. 13. There are two main ways to comment: submit via email to the Federal eRulemaking Portal, see: www.regulations.gov. (In the search box, enter BOEM-2021-0044 and click “search.” Follow the instructions to submit public comments and view supporting and related materials available for this notice.

BOEM has a long ways to go before offshore wind becomes more than just hot air. BOEM must do an assessment before putting any leases out for auction. And even if someone does manage to get a lease, there’s no guarantee of it ever being built.

According to BOEM’s lease policy, “A lease does not grant the lessee the right to construct any facilities on the leasehold. Rather, the lease grants the lessee the exclusive right to submit site assessment and construction and operations plans to BOEM, which BOEM may approve, modify, or disapprove. The lessee must obtain BOEM’s approval of its plans before it may proceed to the next stage of the process.”

Companies will also have to figure out where to build a maintenance yard, which a Cal Poly economic study of the issue in SLO County, decided would need a sizable, deep water port and about 40 acres of space to assemble and to maintain the turbines.

That maintenance yard is where the majority of any new jobs this burgeoning industry is claimed to be able to produce.

However, such a port does not currently exist anywhere in SLO County and the study suggested one could be built at the Diablo Canyon power plant, which already has a small manmade harbor.

For more information on the issue, see: www.boem.gov/renewable-energy/state-activities/morro-bay-call-extension-areas.