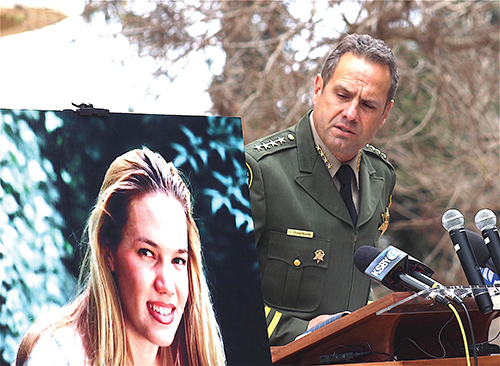 County Sheriff Ian Parkinson looks down at an enlarged photo of Cal Poly co-ed, Kristin Smart, who disappeared from campus in May 1996 during an April 13 news conference announcing the arrest of Paul Flores in her murder. Photo by Neil Farrell

After over a quarter century, the case of a missing and presumed dead Cal Poly freshman has ended with her accused killer being convicted of murder, but his alleged accomplice father being acquitted.

Paul Flores, 44, was convicted of First Degree Murder in the disappearance of Kristin Smart, who was a 19-year-old Cal Poly freshman when she vanished in May 1996.

Her accused killer, Flores, had evaded justice in the case for some 25 years before he was finally arrested for the crime in April 2021. Flores has been living in Southern California — most recently in San Pedro — since shortly after Smart disappeared and he became the No. 1 and only suspect in the case.

Flores was also a freshman at Cal Poly in 1996 and was the last person to see Smart alive, after he offered to walk her home from an off-campus party on what was Memorial Day Weekend.

Smart was never seen again and to this day her body has not been found.

That’s where Paul Flores’ father, Reuben Flores, comes into the story, as he was suspected from the start of having helped his son hide her body and cover up his crime.

Rueben Flores, 81 of Arroyo Grande, was arrested along with his son and charged with being an accessory after the fact to Smart’s murder. He was accused of hiding Smart’s body in a shallow grave underneath the rear deck of his Arroyo Grande home.

Though a thorough search of that crawl space turned up some trace evidence of blood, it wasn’t enough to convict Rueben Flores who was unanimously acquitted.

The father-son were tried in Monterey County, after a SLO judge deemed there had been too much pre-trial publicity — stretching over more than 25 years — for them to get a fair trial in SLO County.

The unusual trial saw both men with their own attorneys, and each with a separate jury to decide their fates.

In the end, a juror in Rueben Flores’ trial said there was not enough solid evidence to convict. That juror also said he would not have voted to convict Paul Flores either.

Perhaps sealing Paul Flores’ fate was the testimony of two women from Southern California who testified that Paul Flores had drugged them and raped them in the years since Smart’s disappearance, which helped the prosecution prove one of its key elements in the case — that Paul Flores killed her while raping her.

The testimony that he’d drugged and raped other women proved key in the circumstantial case, which was marked by a lack of direct evidence — not even a body, which is why Rueben Flores was acquitted.

The trial took three months to conduct, and was presided over by Monterey County Superior Court Judge Jennifer O’Keefe, with jurors coming from the Salinas area.

Smart’s remains have not been found and Rueben Flores, in a news conference after his verdict was read and he was released, didn’t seem inclined to lead authorities to her body. Indeed, doing so now could be a hindrance to any chance his son has on appeal.

District Attorney Dan Dow, who is the third SLO County D.A. in the case, said, “The impact that Kristin’s disappearance and its investigation have had on the Smart Family and our community, spanning a quarter century, is profound. We thank them for the tremendous trust and patience they have placed in the investigation and prosecution of this terrible crime.

“This verdict provides some sense of justice for Kristin, the Smarts, and our community. Today, justice delayed is not justice denied.”

Dow said the conviction was the result of a collaborative effort of more than a dozen local, state, and federal law enforcement agencies over the span of 25 years, fueled by the perseverance of the Smart Family.

Deputy D.A. Christopher Peuvrelle, who tried the two cases, said, “On behalf of the San Luis Obispo County team, we thank the Smart family for their steadfast pursuit of justice for Kristin. Their strength has inspired a community. We appreciate the witnesses in this case who came forward to reveal the truth about what happened to Kristin that cold night in May of 1996.

“Many endured years of guilt, frustration, and anger, yet maintained their dignity and focus on the truth. Lastly, we want victims everywhere to know their voices will be heard and that there are people in the Justice System who will never stop fighting for them.”

D.A. Dow also thanked Chris Lambert, whose podcast “Your Own Backyard,” delved deeply into the mystery of her disappearance and revived the case in the minds of the public, and led to finding more witnesses and building the case that was presented at trial.

“We acknowledge the tireless efforts of Chris Lambert in persistently and compassionately keeping the memory of Kristin alive, through the podcast ‘Your Own Backyard,’” D.A. Dow said.

The guilty verdict was a welcomed relief for County Sheriff Ian Parkinson, who was with the SLO Police Department in 1996 when Smart disappeared. Cal Poly Police brought in the County Sheriff’s Office to help in their investigation and the case has been under the Sheriff’s purview ever since.

Ed Williams was Sheriff when she disappeared, followed by Sheriff Pat Hedges, and now it’s Sheriff Parkinson who finally sees it come to an end, though the search for her body will continue.

Paul Flores faces 25-years-to-life in prison for the first degree murder of Kristin Smart. He is scheduled to be sentenced on Dec. 9 at the Monterey County Superior Court in Salinas.

Rueben Flores was released after his acquittal and is a free man who can never be tried again for this crime, which has ensnared his son, likely for the rest of his life.