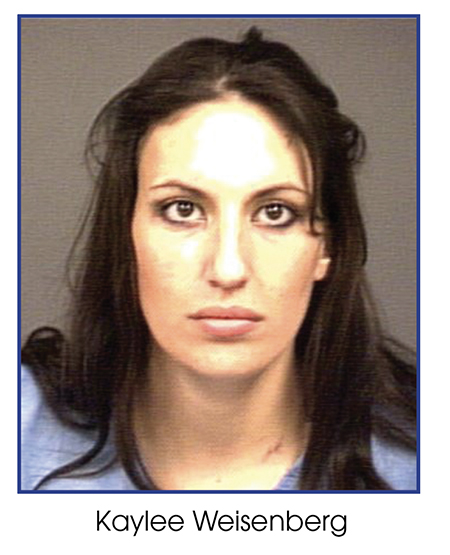 A North County woman who was convicted of killing a California Highway Patrol oOfficer with her car while driving under the influence of drugs, has been paroled early and over the strong objections of the district attorney.

“In August of 2011,” the announcement from Dow’s Office said, “Kaylee Ann Weisenberg, 35, was convicted of second-degree murder and gross vehicular manslaughter while intoxicated for her June 2010 killing of California Highway Patrol Officer Brett Oswald (48 at the time). She was sentenced in April 2012 to serve 15-years to life in state prison.” And this past December, the State Parole Board granted her release.

The conviction stemmed from a June 2010 accident wherein Weisenberg was speeding around a corner on South River Road, lost control of her car and hit Ofc. Oswald, who was busy putting out flares for a disabled car incident that he was working. He died from his injuries. Weisenberg was not injured. She was subsequently arrested and charged, after her toxicology tests came back for methamphetamine in her blood stream.

It was the second time she had been up for parole, according to the release, and was approved over the objections of Ofc. Oswald’s Family.

“Members of Ofc. Oswald’s Family including his widow, sister and parents attended the parole hearing by video and strongly objected to her parole,” the D.A.’s Office said. “A San Luis Obispo County Deputy District Attorney represented the office at the hearing and voiced a forceful objection to the release of Weisenberg based on the serious nature of the crime and continued danger to the community should she be released.”

Weisenberg was convicted of second-degree murder and gross vehicular manslaughter while intoxicated, the release said, and sentenced to 15-years to life in state prison. She’s benefitted by a subsequent change in the law.

“At the time of her sentence,” the D.A.’s Office said, “individuals convicted of murder received no ‘good time’ credits. Meaning, Weisenberg was required to serve every day of 15-years prior to even being considered for parole.” California voters changed the game.

“In 2016,” the release said, “Proposition 57 was passed, which provides individuals convicted of violent crimes, such a murder, up to a third, or 33%, reduction in their sentences. As a result, Weisenberg was granted parole after serving only 12-years for her murder conviction.”

The D.A. vowed to ask the Governor to intervene and deny the Parole Board’s decision.