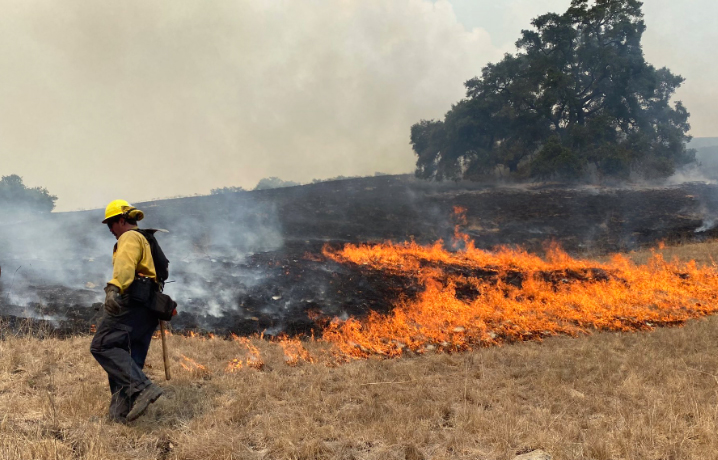 Firefighters battled two, lightning-sparked fires in the hills east of Cayucos last week, limiting the largest fire to about 300 acres and the other to even less.

On August 15, a dry lightning storm passed through California sparking blazes up and down the state including several in SLO County and two near Cayucos.

Cal Fire battled the Cayucos fires, called the “3-2,” and “Whale Fire,” with help from fire stations throughout the County.

Another blaze, the “2-2 Fire,” was in Nipomo and firefighters were able to quickly get it under control. Other fires were sparked in California Valley and east of Paso Robles.

The 3-2 Fire burned steep hillsides near the intersection of Sunrise Ridge and Santa Rita Creek Road. No structures were lost, according to news reports.

According to a Cal Fire report, the Whale Fire started at 10:40 a.m. Saturday, July 15 and while the cause is officially “under investigation,” dry lightning was the likely cause.

“Access to the fire has been difficult for fire equipment,” reads the Cal Fire report dated July 16. “Firefighters face high temperatures and steep terrain, as they establish control lines. Mop-up and mitigating tree hazards around the perimeter will be a priority today.”

No structures were destroyed and no injuries were reported and the blaze was in mop-up stages by Wednesday.

Last week’s heat wave that pushed temperatures into triple digits for several days in a row, also trapped a tremendous amount of smoke. As the wind stilled, the heat climbed and the smoke thickened, hanging mostly high in the air on the much cooler Coast, but pushing all the way to the ground just a few miles inland.

Even without the threat of Coronavirus, it would have been wise to wear a mask against the smoke.

Petra Clayton of Los Osos and her husband were driving Old Creek Road Saturday before it was closed, witnessing the fire in its infancy

“We happened to be driving on Old Creek Road towards Whale Rock Reservoir at about 11 a.m.,” she told EBN, “when we saw some smoke. Turning into Cottontail Creek Road we ran into concerned area residents.”

On their way back, the avid videographer filmed for a few minutes the fire out the car window.
“On our return trip back out on Old Creek Road I captured some of the blaze.” That footage can be viewed on her Flickr account (see:https://www.flickr.com/photos/jack-petra-clayton/50231552462/