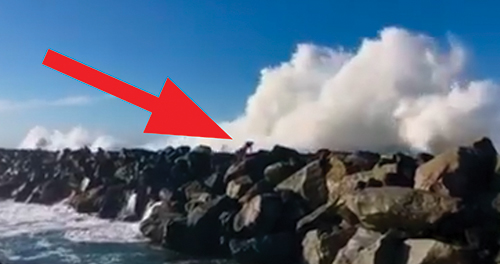 A wave-watcher in Morro Bay was swept off the North Jetty by a humongous breaker and nearly drowned inside the harbor mouth, in a frightening reminder of the dangers of the ocean.

The incident occurred Jan. 11, during several days when giant waves pounded the jetty, a spectacular event when it happens and one that attracts a lot of people to marvel at the sight.

It happened about 9:30 a.m. when an unidentified man was walking on the jetty and got hit by a wave. The water knocked him off his feet and he is believed to have hit his head as he was swept into the water on the other side.

Fire Chief Steve Knuckles said the man was found by bystanders unconscious and facedown in the water. When firefighters and the harbor patrol arrived, the man had regained consciousness and he was transported to the hospital.

Chief Knuckles said if he’d stayed in the water for much longer, he might not have made it. He was not able to give any information on the injured man’s identity under privacy laws.

The waves at the jetty have seen numerous big days recently and often come up ahead of storms.
Readers are reminded to never turn your back on the ocean and to be especially careful around the jetty, for while it may be fun to clamber along the massive boulders, they are sometimes unstable and a person can suffer serious injuries in a fall.
And so-called “sneaker waves” that are much bigger than normal can come in on even the calmest of days.