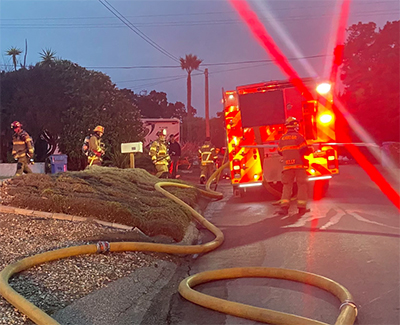 A suspicious fire at a home in Morro Bay.

According to a news release from MBFD Capt. Scott Subler, they responded at 6:25 a.m. Thursday, Dec. 23 to a report of a house fire in the 600 block of Bella Vista St.

No one was home at the time and there were no injuries to citizens or firefighters, according to the report.
The fire was contained in about 20 minutes after firefighters arrived and the fire damage was contained to the small area where it started. The rest of the house sustained smoke and heat damage including the attic.

Morro Bay was assisted by Cal Fire Engine 15 from Los Osos and a dozen firefighters responded to the scene.
Damage was estimated at $70,000 to the home and a contents loss of $15,000.

“The cause of the fire is under investigation and is suspicious in nature,” Capt. Subler wrote.
Anyone with information on the events in the area around the time of the fire is asked to contact Capt. Subler at (805) 772-6242.
In the photo, firefighters gear up to fight the early-morning house fire Dec. 23 on Bella Vista Street. Photo courtesy MBFD