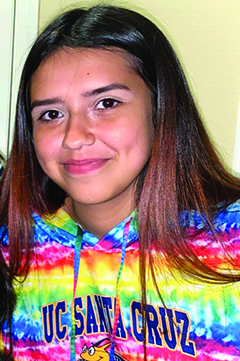 An Arizona teenage girl reported missing from Nipomo has been found.

Alilianna Trujillo, 15, who was visiting family members for the summer was reported missing on July 1 after she was seen leaving a family member’s home in the early morning hours.

“During the course of the investigation, Sheriff’s Detectives were able to determine the identity of a suspect and a female accomplice who had befriended the victim on a social media platform for the past year,” said Sheriff’s Spokesman, Tony Cipolla in a news release.

The suspect was identified as 38-year-old Daniel Navarro of Victorville, CA who allegedly posed as a teenager and urged the juvenile to run away with him to Mexico. A female suspect, 20-year-old Julie Le of Garden Grove, CA, allegedly drove Navarro and the victim from Nipomo to a location in Tijuana.

“On July 10, both Navarro and Le were arrested as they entered the United States from Mexico,” Cipolla said. “On the morning of July 11, Mexican authorities rescued the juvenile from a residence in Tijuana, Mexico. She has been safely reunited with her family members.”

Homeland Security Agents who work in the Sheriff’s Special Operations Unit assisted with the case in helping to locate the missing girl. Sheriff’s Detectives also obtained multiple search warrants for cellphone and social media account information that aided the investigation.

← Previous: City to Study Compensation Rates Raises for the Mayor and City Counsel? →