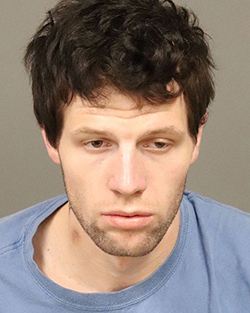 A man who brandished a handgun at a motel clerk in August and was arrested in September, has now pled guilty on two felonies and is slated to be sentenced in November, Morro Bay Police said.

MBPD Cmdr. Amy Watkins said the case started at 5:51 p.m. Aug. 27 when officers responded to a report of a man with a gun breaking into a room at the Rodeway Inn, 2460 Main St.

According to Cmdr. Watkins, “Suspect was contacted by the victim (a motel employee) when an argument ensued and was told he was going to contact law enforcement. At that time, the suspect retrieved a handgun from his waistband and pointed the firearm at the victim. Suspect then fled on foot.”
Police searched high and low for the gunman but didn’t find him. Witnesses reported he got picked up by someone in an unidentified vehicle and made his escape. Police did find two handguns in their search along with some personal property. And like a homing pigeon the turkey eventually returned to the scene.

On Sept. 2, the suspect, identified as Emery Grohregin, 26, was located again at the Rodeway Inn and after a brief standoff with police, as arrested. He was charged with several felonies, according to Cmdr. Watkins, including Assault with a Deadly Weapon, Criminal Threats, Felon in Possession of a firearm, and Burglary.

Last week, Cmdr. Watkins said, Grohregin pled to felony charges of ADW and criminal threats. He is slated to be sentenced to prison sometime in November.