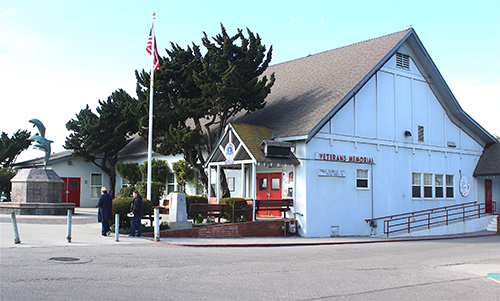 The historic Cayucos Vet’s Hall has been closed to the public since May 2016 due to structural problems, but after more than 4 years, there could be good news coming from the County in September. Photo by Neil Farrell

The historic Cayucos Vet’s Hall has been closed for years due to structural problems and largely unusable. However, thanks to some ingenuity by the County, who installed a large tent in the picnic area behind the hall, it was able to continue to host some signature events like the Sea Glass Festival and 4th of July Bingo and benefit BBQ.

It wasn’t perfect but it was better than nothing. And then the State government’s response to the coronavirus pandemic hit in March like a freight train, and whatever use the community was getting of the Vet’s Hall abruptly stopped.

The Vet’s Hall, which most people would agree, is the heart of the beachside community, was closed by the County in May 2016 after an inspection found that the building was not structurally sound and its continued use by the public for everything from public meetings, to weddings and civic celebrations, was not safe.

The main issues were a rotted out floor and foundation under the hall’s stage that actually cantilevers over the beach, and the connections between the walls the high-pitched roof were rotted away too. The outdoor deck adjacent to the Cayucos Pier was rotten and eventually removed. Pretty much the whole back portion of the building will have to be replaced as well.

After a couple of years, the Cayucos Art Association, which has a gallery inside the Vet’s Hall, was allowed to reopen after engineers determined that its small portion of the building was safe to use. But again, the coronavirus reared is ugly, spiky head.

Now, the Vet’s Hall isn’t being used much at all due to the State’s orders that shut down large gatherings in such venues, along with bars, concert halls, and even football stadiums in an effort to stop the spread of the coronavirus.

Now with the entire hall essentially unusable until the public health emergency is over, the Lions Club, which manages the hall for the County, is getting some help with expenses.

County Supervisors agreed to help the Cayucos Lions Club cover the cost of utilities at the Vet’s Hall. It’s just the fourth amendment to a decades old contract between the County and Lions Club.

According to a staff report by County Real Property Manager, Phil D’Acri, the County has been managing the Vets Hall for the State of California since 1944 and contracted with the Cayucos Lions Club in 1984 to have the Lions take over management of the Vet’s Hall, the Cayucos Pier and Pier Plaza, “for the purpose of a public meeting place and community hall.”

The County, which ordered even the tent closed, has now agreed to pay some of the monthly bills. “The County has an obligation to the State for the operation of the Cayucos Veterans Hall and has agreed to contribute up to $500 a month, or the actual monthly expenditures, whichever is less, during the period of Aug. 1, 2020 through Oct. 31, 2020 to offset the minimum utility services for the Lion’s Club,” D’Acri’s report said.

Money for the roughly $1,500 total costs is being taken out of the Dist. 2 Supervisor Bruce Gibson’s “Project Grants” allocation.

That might be fine and dandy, but residents want to know when it’s going to be fixed? D’Acri told Estero Bay News that there could soon be really good news.

The County has been working diligently though mostly behind the scenes to get the building repaired, which is complicated by the historic nature of the Vet’s Hall.

It was originally the Cass Landing Warehouse built in the 1870s by Capt. James Cass. Capt. Cass, who also built the iconic pier and Cass House as his personal residence, developed Cayucos as a seaport, shipping local agricultural goods.

Putting the building to rights will be expensive. At last estimate, the County was looking at a project for over $5 million to bring the building up to modern safety standards, while preserving the historic look.
In 2019, the County sought two large grants for the project and landed one of them, a $1.9 million award from the California Natural Resources Agency, back in October 2019.

“The project is one of 21 projects statewide to receive funding under the Agency’s Cultural, Community and Natural Resources grant program funded by Proposition 68,” according to the County’s Cayucos Vets Hall webpage (see: https://www.slocounty.ca.gov/Departments/Public-Works/Current-Public-Works-Projects/Cayucos-Vets-Hall-Restoration). “The purpose of the grant program is to protect, restore, and enhance California’s cultural, community and natural resources.”

Last February the County found out that its second grant application, for the Statewide Park Development and Community Revitalization Prop 68 grant program, was not successful. But D’Acri said there could soon be good news on the project.

He acknowledged that they still have a “gap in funding,” but also said there would be something further on this coming to Supervisors in September. It should be noted that all the preliminary work — from engineering and designs of the repairs, to permitting — is already completed. All they need is funding.

County Supervisors have spent quite a lot of money already. According to a project chronology, in March 2017 Supervisors created the Cayucos Veterans Hall Rehabilitation Project, setting up a fund within the County budget.

It authorized $236,000 to jumpstart the project and hired Studio Design Group Architects, Inc., at $96,000 for “ Phase 1-Schematic Design and Design Development of architectural and engineering services.”

In December 2018 Supervisors approved another $200,000 to pay for construction documents; and in May 2019, Supervisors put in another $161,000 into Studio Design Group’s contract “to expand the scope of services to include Phase II-Construction Documents and Phase III-Construction Administration.”

Predicted completion of the repairs and reopening of the Vet’s Hall is expected to now be sometime in 2022.