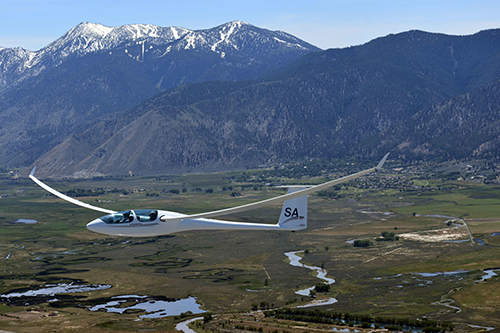 The flexible 93-foot wings are one of the unique features of Iscold’s sailplane, named Nixus (“pushing forward” in Latin).

And Iscold has more records in his sights. “Our radar is now 100 percent focused on the weather,” he said. “We will chase good weather during the summer.”

A sailplane — or glider — soars without the benefit of engine power. With the sailplane designed by Iscold, pilots Jim Payne and Alan Coombs broke three records on June 10, including one Payne himself set 24 years ago. The records included:
• Distance in triangle flight – 1025 km (636.9 miles)
• Speed in 1000 km triangle – 141.7 km/h (88 mph)
• Distance in free triangle – 1025.8 km (637.4 miles)
Iscold began working on his sailplane prior to joining the Cal Poly faculty in 2018. Since then, he has enlisted students from the Akaflieg club to help with his plane, named Nixus (“pushing forward” in Latin).

As most Cal Poly students and employees remain off campus due to the COVID-19 pandemic, Iscold has been staying at Payne’s guesthouse while teaching remotely.

The plane has garnered considerable attention from aviation media, including stories in Flight, Sport Aviation and Soaring magazines. One writer for the Aircraft Owners & Pilots Association described the plane’s innovative 93-foot wings as follows: “While they appear straight when the sailplane is at rest in the ground, the thin airfoils flex and bend in flight to a degree that not every pilot would be comfortable seeing.”

That’s not the only unique quality, according to AOPA. Unlike other sailplanes, key wing features (the flaps and ailerons) are controlled through a fly-by-wire computer system, which is a first. Fly-by-wire systems use computers to process the flight control inputs made by the pilot and send corresponding electrical signals to the flight control surface actuators.

Iscold also created a device to gauge the vibration on the wing. “I am planning to publish scientific papers about these inflight vibration measurements that we made,” he said. “I am still analyzing data.”

He hopes that students will also be able to do work related to the data. “Since we can measure, now I can have students use the data or use the system to capture data in other conditions,” he said.

One record Iscold and Payne are eyeing is the longest distance covered by a sailplane. The record is 1,864 miles.

When asked what lessons he has learned from Nixus, Iscold’s response matched the plane’s “pushing forward” name: “Never give up,” he said.