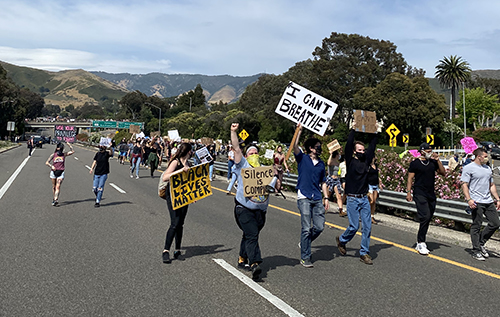 What for the most was as a peaceful protest ended with the use of tear gas in San Luis Obispo on Monday.

The situation began when nearly 1500 protestors carrying signs and chanting “No justice, no peace, no racist police” wound their way through downtown SLO. Marchers gathered to protest death of George Floyd, a black man who was killed in police custody after Derek Chauvin, a white Minneapolis police officer, knelt on his neck for a reported eight minutes on May 25.

“I am calling on all members of our community for peace and calm,” Mayor Heidi Harmon said in a news release. “We are a caring and compassionate community.  I feel the agony and despair from the inhumane and cruel death of George Floyd. I deeply respect and support the protesters fight for equality and justice and the right for all people to come together peacefully to advocate for social change.”

Earlier in the day, protestors stopped in front of the San Luis Obispo Police Department on Walnut. A potentially destructive situation was diffused when SLOPD officers took a knee with protestors to the cheers of the crowd.

Law enforcement later stopped traffic on Highway 101 near the Santa Rosa Street overpass as the crowd took over the freeway walking southbound in the northbound lane.

Things took a turn about six hours after the march began and a couple hundred protestors remained at the intersection of Santa Rosa and Walnut. At 8 p.m. officers asked people to disperse citing unlawful assembly.

“The protest in San Luis Obispo was declared an unlawful assembly after it was determined that there were public safety risks,” San Luis Obispo Police Chief Deanna Cantrell wrote in a tweet.

Officers fired tear gas and flash bangs into the crowd after several request and most dispersed.
Vandals shot out the windows of three businesses on Marsh Street later that night.

“ Several storefronts in San Luis Obispo have been damaged tonight and there is so much rebuilding that our community needs to do,” Harmon said. “We will get through this challenge as we have others – through working together and caring for each other and our community. Please, be safe and care for SLO”.