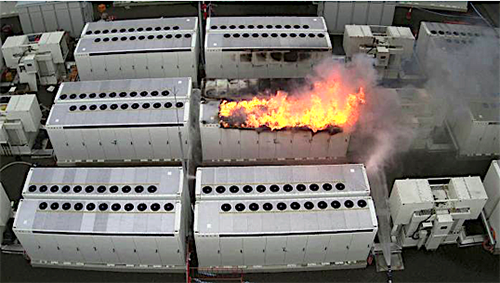 Questions about fire safety were raised regarding a proposed Battery Energy Storage System (BESS) at the Morro Bay Power Plant, after a similar facility in Moss Landing overheated and forced a full shutdown of what is now the largest BESS in the world at 300 megawatts (1,200 megawatt-hours).
That title would be usurped by the 600 MW BESS that Vistra is proposing to build on its closed Morro Bay plant. The issue of safety arose during a recent online forum on the future of the power plant stacks, sponsored by the City of Morro Bay featuring representatives from Vistra, governing agencies, and attended by some 200 residents via Zoom.

The purpose of the meeting was to discuss the status and potential future of the trio of 450-foot tall smokestacks, but concerns were raised about the proposed BESS, the application for which has yet to progress into public review.

The Morro Bay BESS as proposed would have some 7,200, lithium-ion batteries, housed in three 91,000 square foot, 30-foot tall buildings (with 10-feet of equipment on the roofs), and covering some 22 acres of the plant.

It’s the same basic set-up that Vistra has built at its Moss Landing Power Plant but that was put inside an old power station that was decommissioned decades ago as part of a repowering project that Duke Energy completed back when it owned Moss Landing and Morro Bay power plants, plus two others in California.

Vistra’s BESS at Moss Landing sustained an emergency shutdown on Sept. 4, when some of its battery packs overheated and threatened to catch fire. Lithium-ion batteries pose a significant fire hazard when they malfunction.

Such batteries in cell phones and cameras charging in the galley are believed to have caused the tragic fire of the charter dive boat, Conception, a 75-foot vessel that caught fire and sank Sept. 2, 2019 while anchored up at Santa Cruz Island in the Santa Barbara Channel. Some 34 people perished in the fire, with five crewmembers surviving the tragedy.

In Moss Landing, the overheated batteries didn’t catch fire but did fill the building with smoke. Fire officials with Monterey County said that the system’s fire suppression systems worked perfectly, and there was no threat to the public.
The fire department said overheating caused plastics and wiring to melt but the lithium-ion batteries didn’t catch fire. That hasn’t always been the case however.

At Moorabool near Geelong, Australia in early August, the “Victorian Big Battery” project that uses the Tesla Megapack batteries caught fire during testing, before it was even hooked up.
That facility, the largest in Australia, has some 210 battery packs, capable of storing 450 megawatt-hours of energy. Vistra’s Morro Bay proposal would have 2,400 battery packs in each of three buildings.

In Australia, a single battery pack caught fire and spread to a second pack while the batteries were undergoing testing and were in a shipping container.
The Victorian Big Battery facility is owned by French renewable-energy developer, Neoen. According to the Times of London, some 38, large, lithium-ion battery fires have erupted since 2018, citing Paul Christensen, a professor at Newcastle University.
Among the incidents, in Beijing, China a fire at a lithium-ion battery installation last April killed two firefighters and took 235 firefighters to control.
Last September, a large lithium-ion battery in Liverpool, England owned by Danish renewable energy company Orsted, caught fire in the middle of the night.

And in a 2019 incident in Arizona, a 2-megawatt lithium-ion battery storage facility caught fire and exploded, hospitalizing eight firefighters.
Lithium-ion batteries can catch fire through a process called “thermal runaway,” which happens when a battery is overcharged or crushed. Heat as well as a mixture of gases are produced, which when released, form a vapor cloud that can ignite or cause an explosion.
And because lithium-ion produces oxygen when it burns, it feeds its own flames and makes it difficult for firefighters to extinguish using traditional methods of pouring water on it. But pouring water on them cools them down.

Back at Moss Landing, Monterey County Fire Chief Joel Mendoza told KSBW-TV that while lithium-Ion batteries can be unstable, the safety system at the Moss Landing facility worked as intended.

Vistra in a news release after the overheating incident, said, “There are multiple layers of safety integrated into the battery facility and the risk mitigation and safety systems worked as designed, detecting these modules were operating at a temperature above operational standards and triggering targeted sprinkler systems aimed at the affected modules.”

But the Moss Landing facility remains closed and the incident is under investigation. Vistra spokeswoman, Meranda Cohn, told Monterey County Weekly, “We are confident it is a matter of when, not if, the facility returns to service. However, speed is not our goal here — safety is. We expect not only to repair the facility and bring it back into operation but also to improve it so this does not reoccur.”
According to an August 2021 report in the Journal of Energy Chemistry, “When operating, the electrodes produce heat, which might become uncontrollable during battery malfunction.”

Monterey County Hazmat crews reportedly responded to the Moss Landing facility to test inside and outside of the building, as well as the nearby waters of Elkhorn Slough, and no toxic chemicals were discovered by the hazmat crews.

According to information provided to the City by Vistra, and concerning safety: “The proposed battery buildings would not be occupied; however, personnel will be required to access the batteries for maintenance. Therefore, the project will incorporate a multi-tiered safety system consisting of passive design considerations, monitoring, automatic, and manual protection systems. These systems will be designed based on industrial best practices in consultation with the Morro Bay Fire Department.”

Once completed, Vistra has said there would only be about 10 people working at the plant.
Retired Morro Bay Fire Chief Steve Knuckles back in February said after he’d toured the BESS in Moss Landing that he was impressed with its fire suppression system.

Each of the thousands of batteries, which Knuckles said were each about the size of a desktop computer tower, had its own fire sprinkler head and the batteries were arranged in larger arrays, each housed in a fireproof room.
“They had triple redundancy with the sprinkler heads,” retired Chief Knuckles said, adding that he believed that they could make a BESS in Morro Bay work for the community.

They would of course need special firefighting equipment but he said that Vistra would pay for that, just as the various owners of the power plant have always paid to help equip the local fire department for potential emergencies at the plant.