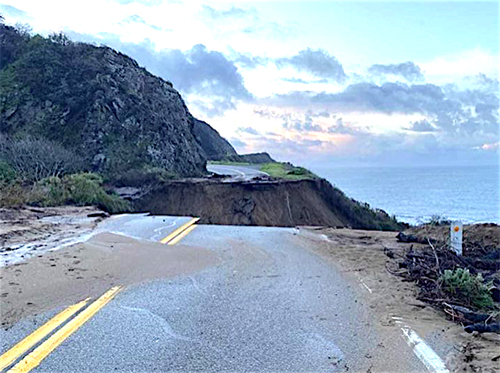 This photo from Caltrans shows gaping hole that the Rat Creek Slide of Jan. 27, left on Hwy 1.

Scenic Highway 1 through Big Sur is closed indefinitely after heavy rains washed out a section of roadway at Rat Creek, located just south of the world-famous Big Creek Bridge in Monterey County.
Caltrans had been issuing warnings days before the 3-day, “atmospheric river” event sent torrential rains to the Central Coast.
“Highway 1 on the Big Sur Coast will be closed between Ragged Point in San Luis Obispo County and Deetjen’s Big Sur Inn in Monterey County [44.6 miles] beginning Tuesday Jan. 26 at 5 p.m.” Caltrans Dist. 5 reported Jan. 26.
They expected the closure to last through Thursday, Jan. 28, but as someone said, “Man plans, and nature laughs.”
Monterey County Emergency Services issued evacuation orders for the burn scar area where the Dolan Fire burned last year and, “where this storm brings an increased likelihood of debris flows.”
That prophetic warning came true on Wednesday, when the hillside above Rat Creek started to slide, washing mud and debris over the traffic lanes.
At 5 p.m. Wednesday, Jan. 27 Caltrans extended the closure and evacuations through Friday. But the road didn’t last even that long.
“A debris flow from the hillside above Rat Creek on Highway 1 on the Big Sur coast,” Caltrans announced Friday, “overwhelmed drainage infrastructure, flowed across the highway, and eroded the road resulting in the complete loss of a segment of Highway 1 at that location.”
A Caltrans crew found the damage. “On Thursday Jan. 28,” Caltrans said, “Caltrans crews, working from the north doing a post rainstorm assessment of the roadway, discovered debris flow across the highway at Rat Creek. Before dark on Thursday, the lane on the coast side of the road had washed out.”
The State issued a $5 million emergency contract with Papich Const., of SLO County “to assist with repair of the highway slide out.” But again, it was too late.
When Friday, Jan. 29 dawned, another crew reported some 150 feet of the highway was completely gone.
Dist. 5 posted drone videos of the damage that show a huge scar starting well above the roadway, and extending hundreds of feet down to the ocean. The slide has likely closed Hwy 1 for months if not longer.

That was the case with the May 2017 Mud Creek Slide that happened farther south, nearer to the SLO-Monterey County Line.
The Mud Creek Slide was the largest in the highway’s history, measuring an estimated 6-million cubic yards. Mud Creek (just south of Gorda) was the largest slide during a winter marked with slides, and was the worst of three major disasters on Hwy 1 that year.
Paul’s Slide, near Lucia, came down and blocked the road in January 2017 and in February, the Pfeiffer Canyon Bridge was damaged and had to be demolished after the land under the bridge supports moved and destabilized the bridge.
A new, steel bridge was fabricated in the Bay Area and installed, reuniting Big Sur that October.
Traffic through the Paul’s Slide Area was reopened with one lane in July, but the Mud Creek Slide took from May 2017 to July 2018 for the road to be rebuilt and for the highway to completely reopen.
The closure hurt tourism for SLO County’s North Coast communities — from San Simeon to Morro Bay — especially hard, as they are heavily dependent on tourism, and millions of travelers a year arrive via the Big Sur Highway, including numerous tour buses.
Caltrans announced that the highway is open up to Ragged Point on the south and to Deetjen’s Big Sur Inn on the north.
The Rat Creek Slide is at Post Mile marker 30.2, according to Caltrans, some 30 miles north of the County Line.
Caltrans has a lot of work to do on Hwy 1. “Although the wash out at Rat Creek was the most apparent and significant devastation, it was not the only location on Highway 1 along the Big Sur Coast to suffer damage,” Caltrans said on Feb. 1. Crews were working both south and north of Rat Creek.
“Caltrans and contractor crews working north and south of Rat Creek on Highway 1 continue to clear multiple debris piles, remove slides, remove accumulations of water, clear and repair drainage systems, and stabilize damaged sections of roadway at approximately 60 locations that were impacted by storm damage.”
Rat Creek is so dangerous that Caltrans said people who live nearby will have to wait to go home.
“Several of these locations still need to stabilize and dry out before final cleanup and repair work can restore the highway to allow for public use. Damage to Highway 1 south of Rat Creek remains in such condition that it will delay the ability of residents who live south of Rat Creek to return to their homes.”
Caltrans moved the closure area from the original 44-plus miles and relocated to the vicinity of South Coast Center near Post Mile 34 on the north side of the slide, Caltrans said.
They planned to install a checkpoint manned around the clock to only allow residents of the area to get through. The plan was to move the checkpoint southward as crews clear the roadway.
The southern closure, first at Ragged Point, was moved north to Willow Creek Rd., at Post Mile 11.2. Where the checkpoints are set up will be an indicator of how the work is progressing.
“In similar fashion as in the north,” Caltrans said, “the southern edge of the closure will continue to move tracking the progress of maintenance and contractor crews as they work north.”
Motorists are advised to expect areas of roadway to be closed down to a single lane as the work continues. Drivers are advised to proceed with caution and to be aware of construction workers and equipment through the construction zones.
Caltrans officials have not yet issued a statement on the assessment its engineers have been doing on the Rat Creek Slide, but with absolutely nothing to hold up a roadbed, it’s not unreasonable to expect that repairs are likely to be complicated, expensive, and take a long time.