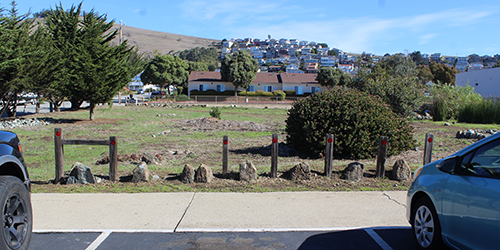 A new recycling center is proposed in Morro Bay at Spencer’s Market.

Morro Bay residents could soon see an end to the dearth of places to redeem their bottles and cans if a proposed recycling center gets built at Spencer’s Market.
The Planning Commission got its first look at the proposal by Edgar Arroyo of Santa Maria, dba AGS Recycling Inc., at its Feb. 2 meeting, when it was asked to approve a coastal development permit and a conditional use permit to install two, 216-square foot cargo containers and covering some 800 s.f. of a vacant lot on the north side of the market, located at 2650 Main St.
A recycling facility did operate for many years in that same vicinity, except it was on the parking lot pavement, before closing about 4-years ago.
That’s when recycling businesses statewide were shuttered over low payments from Cal-Recycle while costs rose. Cal-Recycle is the State agency that collects the deposits on aluminum cans and certain types of glass and plastic bottles, and runs what amounts to a reimbursement program with recyclers.
The collapse has also been attributed to a crash of the recycling markets, after China quit buying the U.S.’s recycling materials, and the recycling companies were left without the main customer to buy the material.
That continuing collapse has left San Luis Obispo County with just two recycling centers still operating, one in Paso Robles and possibly one in Arroyo Grande, though attempts to contact that business to verify their status were unsuccessful.
There was also one part-time operation in Los Osos behind Grocery Outlet that is only open for a few hours on Saturdays.
Morro Bay had two recycling centers — one at Spencer’s and at the Dollar Tree/Family Dollar shopping center. Both closed at about the same time.
Under State law, retailers who sell so-called CRV bottles and cans — subject to a special tax — are required to also take them back and reimburse the deposits. But if a store can’t accommodate such a facility or simply doesn’t want to, it can pay a fee to the State and escape responsibility.
The State, which has pushed recycling like a mantra for decades, has been working on a solution to the issue but thus far none has been proposed, and enacted into law. And still the State continues to collect the 5¢ CRV tax with every purchase.
The AGS plan calls for the storage containers to be open and manned from 9 a.m. to 5 p.m. daily. How it will work is when one, 9-foot by 24-foot storage container is full, it will be trucked off and replaced with an empty one.
AGS will have one or two workers onsite, according to the company’s application with the City. It will also pay out in cash and not with script that has to be redeemed at the supermarket.
“The facility will be fenced/screened from view from the public street,” reads the City staff report. “The project exceeds the requirements of this policy.”
Each container will have a hydraulic compactor inside it for the cans. Bottles will be stored unbroken.
The zoning on the property allows for the use, according to the City, and there’re no parking requirements. A recycling facility is “ancillary” to the market, which is the main use on the 5.2-acre property that is also home to Taco Temple Restaurant, and a Goodwill Industries drop-off facility.
Also, on Thursday afternoons, there’s a farmer’s market that is a huge attraction for the short time it’s open.
The City declared the project exempt from the California Environmental Quality Act (CEQA) and it is located outside the appeal zone for the Coastal Commission. It is however, subject to appeal to the City Council.
There were some negative comments made about the facility with one neighbor opposed because of the noise and smell such facilities can have. That man said he would support the facility if it were on the other side of Spencer’s building in the vacant lot on the south side of the property and far away from his home.